Hidden gems in Iceland can be hard to come by. The country enjoys a busy tourism industry, and intrepid adventurers have covered every corner of the country. From the waterfalls and glaciers of South Iceland to the volcanic landscapes of the north, there’s a well-trodden trail that most will follow on a campervan trip to Iceland.

However, there are still a few unknown attractions in the country that fly under the radar. For those who are looking to escape the crowds and discover some hidden gems in Iceland, here are 10 spots that you might not have heard about.

This canyon has been popping up on Instagram recently, but remains delightfully quiet – for now. When the word gets out, this is sure to become a main stopping point along the ring road. Located in the southeast corner of Iceland, this beautiful canyon is about as dramatic as they come. Sheer walls, jagged moss-covered cliffs, and towering waterfalls all combine to create a spectacular scene, making it a perfect addition to any ring road itinerary.

Nestled in the mountains leading up to the glacier Vatnajökull, to get here it’s a decent hour-long hike from the parking area. There’s a rough dirt road, unmarked, that leads from Route 1 to the parking area, which can be tricky a period of rain. But that’s what has kept this spot flying under the radar for so long. To get here, you can plug these GPS coordinates into your phone or GPS.

Kvernufoss waterfall is slowly starting to attract more and more people, but compared with its popular neighbour, it remains a hidden gem. If you’re visiting Skogafoss on the south coast, then you can also walk to this spot. Just like Seljalandsfoss waterfall, it’s a waterfall where you can climb around the back of the falls as it charges off the cliffs above. Without the crowds of Skogafoss, you can get close to the powerful water crashing into the river below; it’s a great experience.

To get here, at Skógar you should drive over toward the folk museum, which is on the opposite to Skogafoss waterfall. Park as far as you can to the side and walk past the museum to find a fence with a staircase leading over it to the other side. Once there, a trail leads you around the corner into a quiet gorge, with Kvernufoss at the end. From the parking area, it’s only around 5–10 minutes.

Read: The Top 15 Most Beautiful Waterfalls in Iceland 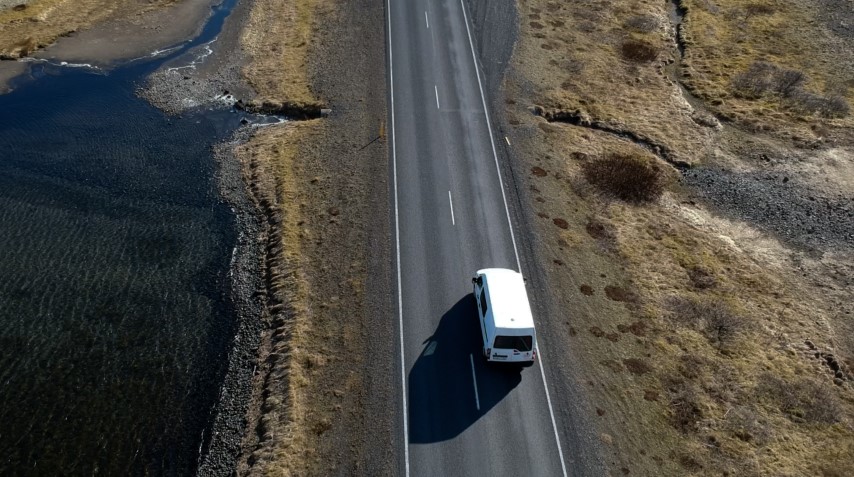 Located on the north-eastern side of the Skagi Peninsula, this epic spot is so well hidden that barely anyone stops by to check it out. If you’re driving the peninsula (it’s a part of the Arctic Coast Way as well), then make sure to pull over to visit these epic cliffs, which should be more popular than they are.

An old farmer’s trail leads you through a paddock towards the cliff’s edge. Peering over reveals an incredible rock formation, with birds wheeling about as they battle gusts of wind. Looking down along the coast also reveals an impressive waterfall, charging off the edge of the cliff and plummeting 120 metres into the ocean below – a unique sight in Iceland.

The interior of the peninsula is also interesting. There are abandoned farms, a lighthouse at the far end, and the ghostly remains of an old fishing settlement, left to the elements and slowly being reclaimed by nature. There’s also an old WWII radar station in the area, used by the Allies when they were occupying Iceland. But the best part is that you’ll likely only see one or two cars in a day as you explore. This is a true hidden gem in Iceland.

This waterfall in East Iceland is often overlooked thanks to the more popular Hengifoss getting all the visitors. It’s hidden location in a valley also means that if you don’t know it’s there, you’ll miss it entirely as you drive around the Lagarfljót lake. Located on its southern side, this hidden gem is at the base of a long valley, an ideal attraction if you’re feeling like getting outside for a bit of a hike.

To get there, you’ll follow a dirt road to a parking area complete with a toilet. Leave the campervan there and hike – it takes around an hour to get to the waterfall. Once there, the waterfall itself is split into two separate drops: the first of around 20 metres, the second around 100 metres. The same red sediment and grey basalt that you see at Hengifoss is also present here. 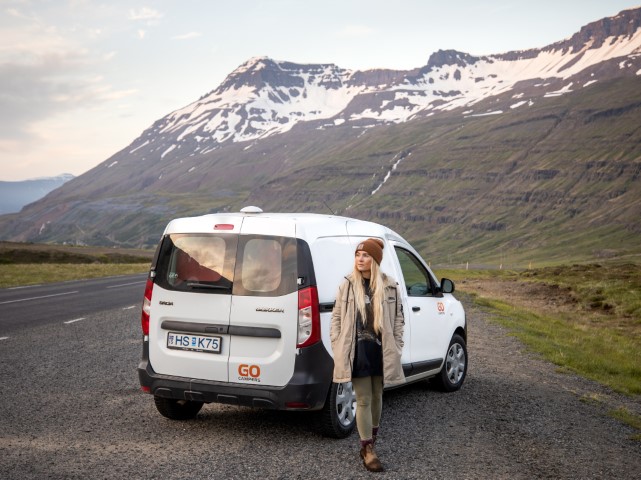 To the Westfjords for our next hidden gem, which is more of an activity rather than a natural attraction. The Svalvogar Circle is the name of one of the peninsulas in the Westfjords, but after years of exposure to the harshest elements, even 4x4 trips are challenging. Instead, over the past couple of decades the peninsula has become a bit of a pilgrimage site for cyclists.

The road of rocks leading around the peninsula takes in some of the Westfjords most jaw-dropping scenery. There are the Westfjords Alps towering above, abandoned farms, a lighthouse, and water rushing over the road out to sea. Cycling around the area is a challenging all-day affair, but you can almost guarantee that you won’t see another soul while you’re out there.

To tour the Svalvogar Circle on a mountain bike, you can rent them at Simbahöllin Café in Thingeyri. Start out along the peninsula and return over the mountain road from Hrafnseyri back to town.

Stórurð is a beautiful area in the remote Dyrfjöll mountain range in East Iceland. Translating to ‘the Giant Boulders’, this hidden oasis is a beautiful meadow dotted with lakes, wildflowers, and, as the name suggests, countless large boulders. These are most likely left over from the retreating glacier of the last ice age, and the result is stunning. Protecting this pristine area of the country and hidden gem in Iceland are a series of jagged mountains, hiding it away from most other travellers.

The hike takes around 2.5 hours each way, and traverses some difficult (although stunning) terrain, so it’s best to come prepared. Remember to bring food, water, and of course the appropriate clothing for a day of hiking in Iceland. The hike begins at the Vatnskarð Service Centre. 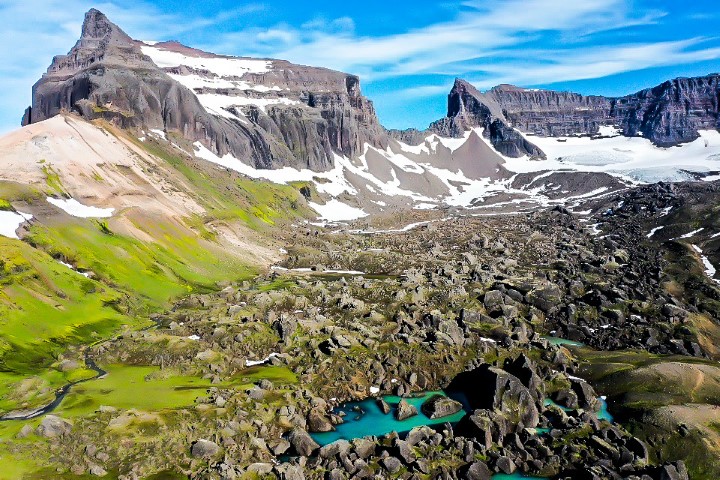 Another hidden gem in Iceland is in the East, close to the highland plateau. The waterfall circle hike is exactly what it sounds like: a fantastic return hike in which you’ll see five beautiful waterfalls and barely any other people. This is a beautiful hidden gem for the hikers out there.

The trail begins and ends in Laugarfell, where there’s a hostel and hot spring waiting for your return. It’s around eight kilometres in total, but you should put aside around 4–5 hours to do the hike since you’ll be stopping a lot to admire the waterfalls themselves. Thanks to its hidden location close to the Eastern Highlands, this remains a quiet hidden gem.

It’s hard to find hidden gems along Iceland’s well-trodden south coast, but Loftsalahellir Cave has remained well and truly under the radar. This cave punctures a rocky cliff covered in moss, providing a stunning view out over the south coast, Dyrhólaey Peninsula, and the black sand beaches. It’s a quick and easy stop to make and won’t have the same crowds you’ll find at the nearby attractions.

To get there, take Route 218 (heading towards Reynisfjara Black Sand Beach). The cave itself is about halfway between Route 1 and the coast, with a small parking area at the base. You’ll have to scramble up a steep cliff to get into the cave, but the views are well worth it.

Rounding out this list of hidden gems in Iceland is another waterfall: Klifbrekkufossar. This fantastic spot is in East Iceland at the base of the fjord Mjóifjörður. Cascading down over seven different cliffs, the 90-metre-tall waterfall is best enjoying from the bottom looking up, admiring the roar of the water as it rushes through the jagged canyon. The clear and pure water is also great for filling up your water bottle. 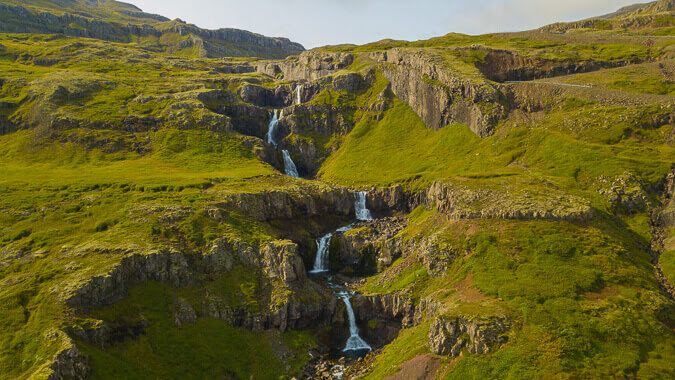 Should I Rent a 4x4 Camper in Iceland?

Iceland is a country of rugged and powerful terrain, with an almost unlimited potential for adventure. But you might be wondering whether to step it up a notch and rent yourself a 4x4 camper?

10 Tips for a Summer Campervan Rental in Iceland

A summer campervan rental in Iceland is bound to be the trip of a lifetime – here are
our top tips to make it unforgettable.

Iceland swimming pool etiquette is a bit different from the rest of the world. Find out how to behave inside.