What are the most scenic waterfalls in Iceland?

Iceland is a country filled with some of the world’s most stunning waterfalls. Spilling out over cliffs, down mountains, and over rocky plateaus, they’re one of the most stunning natural features in Iceland. If you’re planning a road trip and looking into what to see and do, waterfalls are going to play a big part in your Icelandic itinerary.

Below, we’ve rounded up what we think are the top 15 most beautiful waterfalls in Iceland. You can easily see them all on a campervan road trip around Iceland, so remember to book your camper now.

Gullfoss on Iceland’s Golden Circle is generally the first waterfall people will see after arriving in the country. It’s the third stop along the wildly popular “Golden Circle” tourist route, which takes in Thingvellir National Park, Geysir, and a few other sights as well. For campervan road trips in Iceland, the Golden Circle is often the first direction people will head.

Cascading down over two sets of cliffs before plummeting into a canyon below, the roar of this incredible waterfall can be enjoyed from several viewing platforms, both above the water and right next to the cliff’s edge. It’s without a doubt one of the most beautiful waterfalls in Iceland. At just one and a half hours drive’ from Reykjavik, it’s one of the easiest to see on shorter trips to Iceland as well.

Glymur waterfall in Iceland is one of the most popular day hikes to do on a trip out of Reykjavik. This spectacular waterfall lies in Hvalfjörður, only 1-hours’ drive north from the city. At 198 meters, it’s also one of the tallest waterfalls in Iceland, crashing down into a beautiful canyon of black rocks and green moss.

Getting to Glymur waterfall isn’t as easy as driving there; you’re going to need to hike up the side of a deep valley for about 2 hours. The hike itself is amazing, offering stunning views back across Hvalfjörður as you steadily gain altitude. The banks of the river at the base of the trailhead are covered in short trees, a unique trait in Iceland.

3.      Seljalandsfoss, The Waterfall You Can Walk-Behind

You’ve probably already seen a photo of Seljalandsfoss, a stunning waterfall in Iceland on the south coast. It’s located about a one-and-a-half-hour drive from Reykjavik, and acts as the sign for your arrival on Iceland’s south coast.

Falling from the highland plateau, the water crashes down in a beautiful stream, pouring into the pool below. The cliff’s overhang means that you can walk around the back of the waterfall, one of the few waterfalls like this in Iceland. The view from behind the waterfall is especially fantastic at sunset.

Recently, a 700 kroner parking fee has been implemented, but there are good facilities available.

Right next to Seljalandsfoss is a secret waterfall in Iceland: Gljúfrabúi. It’s a waterfall that many travellers miss on a road trip around Iceland, but worth visiting. Walking north along the cliff face from Seljalandsfoss reveals a small crack in the rocks, letting you clamber inside a small gorge-like area. Inside, a waterfall spills down from the cliffs, completely hidden from the outside world.

To get there, you’re probably going to get your feet wet as you must wade through a bit of water. Waterproof boots are generally a must-have in Iceland; to find out what else we recommend you bring along on a campervan trip in Iceland, check out our Icelandic packing list here.

A little bit further along Route 1 from Seljalandsfoss and you’ll eventually arrive at Skógafoss. One of the larger waterfalls on Iceland’s south coast, Skógafoss crashes spectacularly down between mossy cliffs in a perfect sheet of water.

There is a staircase that leads up the cliff face to the top of the waterfall, giving you a commanding view out over the entire landscape towards the ocean. This is also the starting or end point for the famous Fimmvörðurháls Trek, a hike that leads between the two glaciers Eyjafjallajökull and Mýrdalsjökull into the Thórsmörk Nature Reserve beyond.

The parking area at this beautiful waterfall in Iceland doubles as the campground, letting you stay overnight in your campervan and wake up right next to the falls. 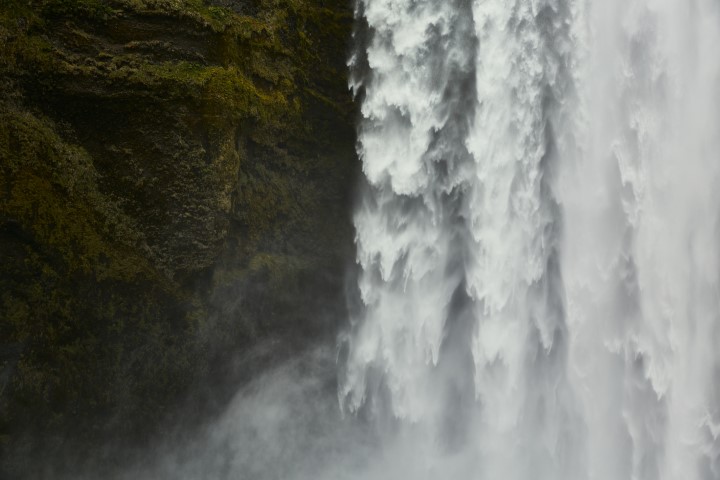 Another hidden waterfall in Iceland is right next to Skógafoss, another one that many visitors miss. Hidden in a canyon just to the east of Skógafoss, to get to this waterfall it’s easiest to park at the museum at the edge of the town. Once there, you must follow the path around the back of the building and climb a ladder over the fence to continue into then canyon.

The muddy trail leads you to the base of the canyon, where this 30-metre-high waterfall crashes loudly into the rocks below. Like Seljalandsfoss waterfall, you can also walk around to the back of the waterfall, as there’s another overhang in the cliffs above. The views of the surrounding mossy canyons are exceptional.

7.      Dynjandi, The Crowning Jewel of the Westfjords

Campervan travellers in the Westfjords should have this spectacular Icelandic waterfall on their bucket list. Dynjandi is the crowning jewel of the region, a breathtaking waterfall that crashes down over a series of tiered cliffs. The immense size and power of the waterfall is enough to keep you entranced for at least an hour; the views over the fjord as well are just as alluring.

Resembling somewhat of a giant’s staircase, this 100-metre-tall waterfall is extra special for one other reason: there’s hardly ever anyone here. The Westfjords is Iceland’s least visited region, with more people heading into the Highlands than making their way out here. For this fact alone, for those looking to get off the beaten track on their campervan trip in Iceland, the Westfjords is an excellent choice.

It’s easy to reach in summer and the area has good facilities like toilets, a large parking lot where you can leave your camper, and well-marked and maintained walkways up to the waterfall.

8.      Goðafoss, Waterfall of the Gods in North Iceland

Sheets of water cascade over a cliff, shaped into a half-crescent. The colourful waters rush away down through the canyon, passing basalt-grey columns along the edges. Located in the north between Akureyri and Lake Myvatn, you’ll easily see this waterfall from the ring road in your campervan. Legend has it that Thorgeir Ljósvetningagoði threw all his statues of the Pagan Gods into the waterfall after attending an Alþingi, in which it was decided that Iceland as a country would adopt Christianity as the official religion.

Dettifoss is one of Iceland’s must-see waterfalls, a powerful cascade in the northeast of the country. So powerful, in fact, that it’s considered the most powerful in all of Europe: 500 cubic metres of water plunges over the cliffs every second, plummeting into the canyon below and kicking up a whole lot of mist.

Dettifoss is situated on Jökulsá á Fjöllum river, in the northern part of Vatnajökull National Park. The stark and dramatic surroundings were chosen by Ridley Scott for the opening scenes of the film Prometheus. To reach Dettifoss we recommend taking road 862, a nicely paved road to a parking area. You’ll hear the waterfall long before you see it.

Another beautiful waterfall in Iceland, and one of the most overlooked, is Hraunfossar. Located in the western region, the name literally means “Lava Waterfall” because the water flows out from underneath an expansive lava field.

The colours of this waterfall alone make it unique in Iceland; flowing out from beneath a series of green bushes perched on the cliffside in multiple streams, it trickles down cliffs of grey and red into a rushing river of turquoise blue. The contrasts are beautiful. There’s also a bonus waterfall nearby called Barnafoss, just a few steps upriver.

East Iceland isn’t very known for its waterfalls, apart from the incredible Hengifoss. With a height of 119 metres, this is the 3rd tallest waterfall in the entire country, and a spectacular stop for campervan road trips through East Iceland. It’s located a short drive easy from Egilsstaðir, alongside the Lagarfljót lake.

The waterfall itself is not too strong, but what’s impressive here are the basalt walls and columns of red that make up the canyon. It takes about 45 minutes to hike up to the falls – not too difficult, but good shoes are recommended. On the way up you can also see the smaller waterfall Litlanesfoss.

Another one of Iceland’s most famous waterfalls must be Svartifoss, located in Skaftafell Nature Reserve, the southernmost part of the Vatnajökull National Park. Basalt columns of black around the waterfall make it one of Iceland’s most unique, providing a beautiful backdrop for the cascade as it charges out over the edge of the cliff.

To get here, you must undertake a small hike beginning from the Skaftafell campsite, which takes about 40 minutes. Once there, you can get very close to this waterfall which makes it even more special. The surroundings are equally as brilliant, with the magnificent canyon, mossy cliffs, and beautiful blue water of the river. This is one of our favourite waterfalls, and a definite must-see when travelling in Iceland with a campervan.

Another one of North Iceland’s most amazing and unique waterfalls is Aldeyjarfoss, located just south of the ring road. It’s another waterfall surrounded by basalt columns; a geological feature created by volcanic activity in the area.

This waterfall in Iceland is another one that many people overlook, mostly because they don’t know it’s there. To get there, the road turns into an F-Road for 6km (4WD cars only), but the track only gets rough if you go past the waterfall, so 2WD campers are OK.

14. Háifoss, One of the Tallest Waterfalls in Iceland

Campervan trips in Iceland don’t often head up into the region where Háifoss waterfall lies. Located in the Thjórsárdalur Valley, most people only travel here in a 4x4 campervan on their way to Landmannalaugar. However, this waterfall makes the trip well worth it, as does the complete lack of people.

Charging off the edge of a cliff and plummeting around 128 metres to the valley below, it’s a rather impressive sight. The viewing platform puts you directly across from the waterfall, giving you an amazing view of the entire cascade. To get there is quite difficult though, as it’s a 14km return hike from the road (while it’s not off-limits to drive a 2WD drive to Háifoss, it’s not recommended due to the very rough road).

15. Ófærufoss, A Stunning Waterfall in the Icelandic Highlands

A beautiful waterfall in the Icelandic Highlands is Ófærufoss, a stunning waterfall you won’t want to miss on a 4x4 campervan trip. Located in the fissure called Eldgjá, formed by a volcanic eruption, this waterfall is dramatic, impressive, and stunning.

Getting here is difficult though, as it’s in the Icelandic Highlands, which means you’ll need a 4x4 campervan. The Highlands are only open from June until September, as the plateau experiences Iceland’s most dreadful weather. To get there, it’s easiest to take road 208 north from Route 1, about 20 kilometres west of Kirkjubæjarklaustur. This road eventually turns into F203, leading to the waterfall.

From hot springs to whale watching, this article discovers the 10 best things to see and do in North Iceland.

Top 10 Things to See and Do in East Iceland

In this article, we’ve rounded up the 10 best things to see and do in East Iceland, one of the country’s least-visited regions.