Quite possibly the furthest you can get from Reykjavik in a campervan, this windswept peninsula in Iceland’s northeast provides a remote and adventurous detour away from the crowds of tourists in the country. It’s a great alternative destination in Iceland for those looking to explore somewhere different in their campervan that not many others visit.

Filled with abandoned farms and untouched nature, beaches filled with driftwood and some of the best birdwatching cliffs in the country, the Langanes Peninsula is an adventurous escape from the ring road. The landscape is mostly flat, filled with small lakes, large cliffs that dive into the water, and low-lying hills – but it all feels as if it’s at the end of the world. Few people make the detour towards this quiet part of the country, and a lot of those who do stick to the main roads and towns, missing this quiet peninsula altogether. It’s completely uninhabited save for a few farms just east of the nearest town, Thórshöfn.

How to get to the Langanes Peninsula

The access point to this peninsula is through the town Thórshöfn in northwest Iceland. To drive straight there from Reykjavik takes approximately 7 hours and 40 minutes, and from Akureyri it’s just under 3 hours.

From Thórshöfn, Road 869 leads you onto Langanes, a rough dirt track that meanders along the northern edge of the peninsula. It’s rough going, and narrow - you don’t need a 4x4 but be wary of your tires and windshield along the way. 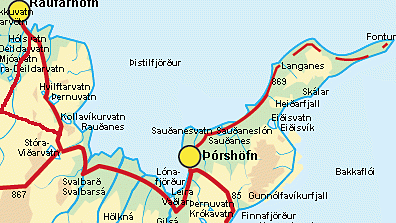 Can You Camp on the Langanes Peninsula?

There aren’t any campsites available on the peninsula – the closest is in Thórshöfn. There is also the Ytra Lón Farm Lodge on the peninsula, a working sheep farm that offers accommodation for travellers.

The main attraction on Langanes is the teeming birdlife. At the Skoruvík cliffs, locals have constructed the Stóri Karl Observation Deck, a viewing platform that teeters out ten metres over the edge of the cliffs, giving you unobstructed views of the bird colonies below. This is one of the best views you can get of a gannet nesting site in the country, and there are also guillemots, fulmars, kittiwake, razorbills, and more. The stormy waters here crash into the sharp cliffs below, giving the whole area a dramatic atmosphere with the wheeling birds.

Once you’ve made your way out further along the peninsula, you’ll find a lonely lighthouse. The point of the peninsula is called Fontur and is one of the most remote areas in all of Iceland. Lay down on your belly to peer over the edge of the cliffs where you’ll get even more views of nesting seabirds.

Backtrack from the lighthouse and you’ll reach a road that branches off towards the southeastern coast, which leads to the abandoned fishing village of Skálar. Once home to over a hundred people in the early years of the 20th century, it was a buzzing fishing hamlet thanks to its proximity to bountiful fish stocks just off the coast.

With the rise of engine-powered boats, the need to be so close to fishing grounds decreased and made the hard-to-dock-at Skálar fall out of favour. It slowly declined, with traders eventually passing it over altogether. During World War II, naval mines that had been placed in the ocean off the East Fjords broke free and washed ashore on the beach, detonating and destroying a few houses in the process. It wasn’t long after that those few that remained gave it all up and moved away, and the village was completely abandoned in 1946. Now, all that’s left are a few ghostly remains of houses, farms, a fishing warehouse and part of the stone pier that was built for the boats to dock at. It’s one of the most haunting locations in Iceland.

Before being abandoned, the town did have one last hurrah when during World War II the NATO allies built a radar station on top of the nearby mountain, Heiðarfjall. This base was manned by a small encampment of soldiers, which brought jobs and entertainment for the locals of the small, declining village, and even a cinema for entertainment. However, with the end of the war the base was abandoned, and along with it the last glimmer of hope for Skálar, which was completely abandoned one year after. A rough road climbs to the top of Heiðarfjall, where you can see some small radars and buildings left over from the NATO base.

There’re more ghost stories on this peninsula. As you drive along the coast you’ll find a lot of abandoned farms, slowly being reclaimed by the nature on this remote peninsula. Stopping to explore is fascinating, and downright spooky – this is one of the highest concentrations of abandoned farms in the country. The beaches along the coast are also worth a look, filled with driftwood that has floated across from Siberia. 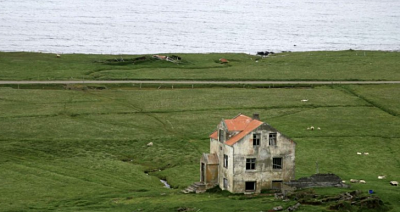 The 10 Best Campsites in Iceland

One of the best ways to soak up the stunning Icelandic nature is through a campervan trip. Here are the best campsites in Iceland.