Iceland’s south coast is an incredibly popular destination for people travelling in a campervan, and with good reason; this is where you can find most Iceland’s most famous sights. Pretty waterfalls, lush green fields (in the summer at least), epic glaciers and black sand beaches make up the breathtaking scenery along this stretch of coast line that is hemmed in on one side by the North Atlantic, and the precipice of the Icelandic highlands on the other. This guide will explore the best things to see and do along Iceland’s south coast for campervans. 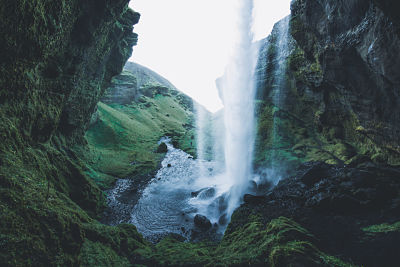 How Much Time Will You Need?

As stated in the introduction, the south coast is generally where you’ll find all the sights that have made Iceland famous. Iconic waterfalls and black sand beaches, rocky cliffs and of course the Jökulsárlón Glacier Lagoon all the way over in the south east are on nearly everybody’s Icelandic bucket lists.

The good news is that it’s all relatively straight forward along here – there’s barely any room for detours from the ring road, which is where you’ll find a lot of these sights. We recommend taking 2-3 days along the south coast if it’s part of your ring road journey. If you’re here for a shorter amount of time, a popular thing to do is to aim for Höfn before turning back to Reykjavik. This is again do-able in 2-3 days (perfect weekend itinerary), but make sure to leave some sights for the way back as there’s only one road. 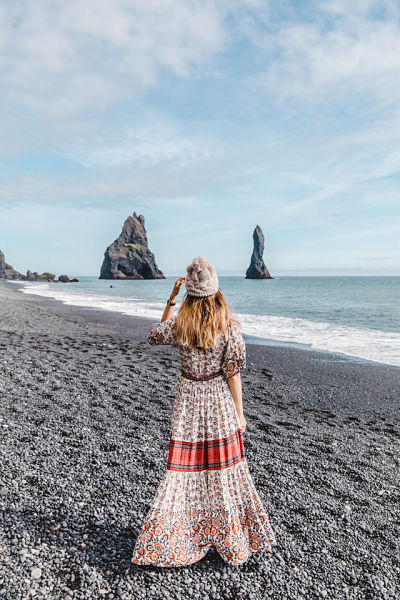 As its one of the busiest parts of Iceland, there’s no need to worry when it comes to finding gas stations, places to eat, and grocery stores along the south coast. The towns between Reykjavik and Vik all have their own little supermarkets, be it the big Bonus and Krónan in Selfoss or smaller stores in Hella or Hvolsvöllur. The service station in Vik must be one of the busiest in the country (outside of Reykjavik), and from here you’ve got stops in the unpronounceable Kirkjubæjarklaustur, outside Skaftafell Nature Reserve and finally in Höfn.

With so much to see and do along the south coast, in this text we’ll only cover the main sights and what to do there. Other lesser known and not as visited sights you can find on the map below.

Reykjadalur valley is home to a geothermally heated hot spring river, and now is one of the most popular things to do in the country. Out the back of the town of Hveragerði is where you’ll find the trail head, and you must hike for about an hour a little bit up into the mountains to find the spot where the river runs hot. It’s very busy during the summer, so either wake up early or stay up late and make use of the daylight – there’s a good campsite in Hveragerði.

Seljalandsfoss is the first waterfall many will see in Iceland, charging off the precipice of the highlands and sparking that sense of excitement and adventure that many coming to Iceland are seeking. It’s the waterfall that you can walk behind (not when it’s icy) and is deceptively powerful for such a small waterfall (yes, it’s small – wait until you see some of the others in the country). Parking is around 700 kroner. 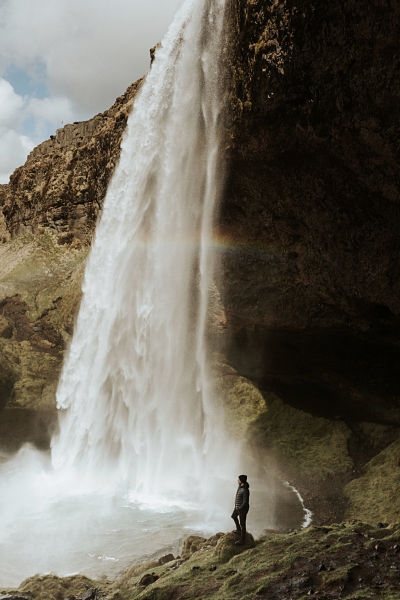 Eyjafjallajökull, the tongue-twisting ash-spewing volcano that caught the world’s attention in 2010 is right here. Although not much of an attraction (you can only really catch glimpses of the glacier on top when it’s a clear day) there is a great exhibition called Eyjafjallajökull Erupts right on the ring road that will teach you more about this epic eruption. 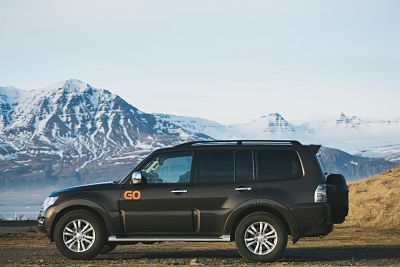 Seljavallalaug is Iceland’s oldest man-made swimming pool. Geothermally heated (only very slightly), this pool is more about the location rather than the quality of swimming you can find here. Take road 242 off the main route and follow the road to its end where there is a small area for parking. A 30-minute walk into the valley that cuts into the foothills of Eyjafjallajökull and you’ll find this pool hiding around a corner. 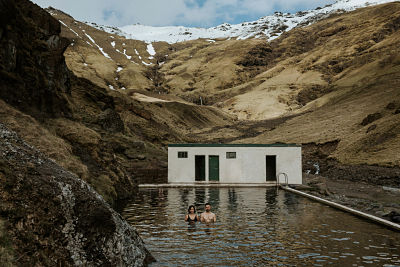 Skogafoss is perhaps Iceland’s most popular waterfall, this perfect sheet of water that crashes down over the cliffs is an incredible sight. Get here early before the tour buses start to arrive, or even better make use of the campsite here and wake up early to enjoy it with only a handful of other people.

Reynisfjara Black Sand Beach is another one of Iceland’s most popular sights. Made famous through TV series like Game of Thrones (read: Game of Thrones Shooting Locations in Iceland) and movies like Star Wars: The Force Awakens, this gorgeous strip of black sand beach is always busy. At one end of the beach is a cliff face made up of hexagonal basalt columns, formed from ancient lava flows. Stay far from the water as this is also one of the most dangerous beaches in the world. Unexpectedly large waves can sweep in, and powerful undercurrents have swept people out to sea before. 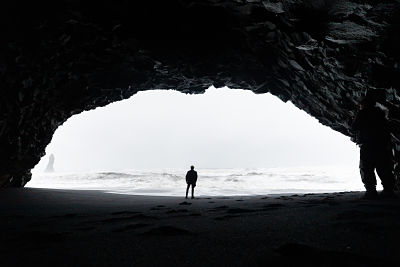 Fjaðrárgljúfur canyon seems to be a very fragile place. Justin Bieber used this to shoot a music video for I’ll Show You, where he jumped around where he wasn’t supposed to. Since then it has grown in popularity, the snaking canyon’s cliffs covered in the bright green Icelandic moss. It has been closed temporarily a bunch of times lately to try and restore damage done to the environment around here, so if it is open, tread carefully and responsibly, sticking to the designated paths. 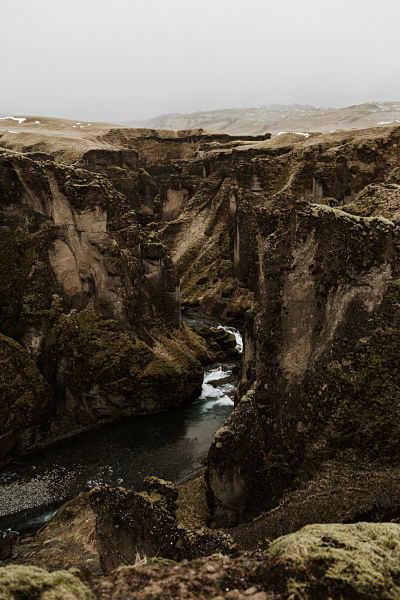 Skaftafell Nature Reserve boasts a lot of amazing hiking trails within its borders, nestled below the behemoth Vatnajökull Glacier and between two outlier glaciers. A short but sweet trail leads to the popular waterfall Svartifoss, but if you have the time it’s worth exploring some of the longer trails that give you great views and different perspectives of the glacier above. There’s a great campsite next to the visitors centre as well. 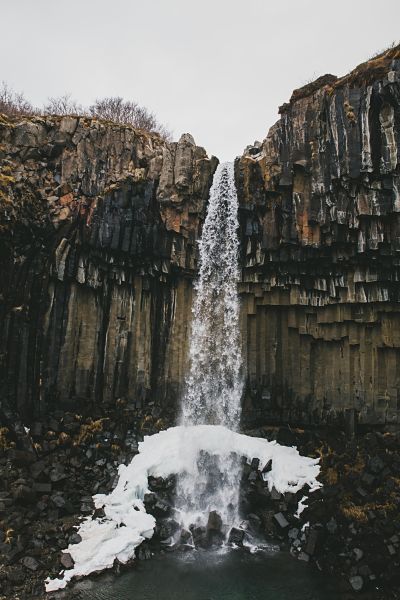 Jökulsárlón Glacier Lagoon and Diamond Beach are a pair of attractions that many will see on Instagram long before setting foot in Iceland. Both are an awesome show of nature. The lagoon is a large expanse of water full of floating chunks of glacier that have slowly broken off and crashed into the water. Currents pull the glaciers out into the sea via a small channel, where they then get pushed by the ocean tides back up onto the nearby black sand beach. These chunks of glacier in all stages of melting sit on the sandy shore, like nature’s very own sculpture museum.

Hveragerði is often the first town outside of Reykjavik that people will visit. This cute little town is built above a highly geothermal active area, meaning that at most times there will be steam billowing out of the ground at various points and in the mountains surrounding town. It’s a great little stop to explore, as there are a few great museums, places to eat, and some cool galleries as well, on top of the large greenhouses on the edge of town growing vegetables.

Next up is Selfoss, the largest town along the south coast. It’s your average country town, with places to eat, stock up on groceries, or visit a café or two. The highlight for many here will be the Bobby Fischer Museum, dedicated to the life and achievements of the world-renowned chess player who won the Chess World Championship in Reykjavik, 1972.

Many will drive straight through Hella and Hvolsvöllur, at the very most stopping for a hot dog at one of the service stations. However, both towns are along the bus route that goes up into Landmannalaugar, so the campsites offer a good spot to leave your campervan for a day or two if you do decide to get the bus to explore this magical part of the highlands.

Vik is perhaps one of Iceland’s most popular towns. This little spot is Iceland’s southernmost point (not counting the Westman Islands) and a very busy intersection and stopping point for travellers coming either way along the ring road. Three impressive sea stacks jut up out of the ocean just off the coast, which legend says are trolls that turned to stone after getting caught out by the rising sun. There are great views over the whole city and the coast line from above the church, where you’ll also find the town cemetery.

Kirkjubæjarklaustur is as underrated a town as they come in Iceland. Apart from its long and unpronounceable name, there are a few great waterfalls on the outskirts of the town, and one of the country’s most beautiful campsites. Also, of interest is the Kirkjugólf (Church floor) out the back of town, the tops of basalt columns emerging just above ground and looking like a man-made floor. 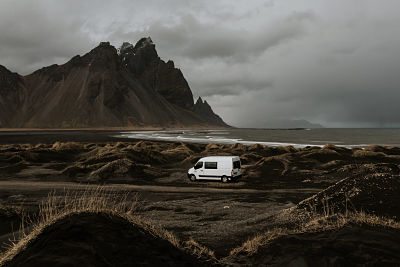