The beautiful region of South Iceland should be on the itinerary of anyone on a camping trip in Iceland. This region has become the go-to spot for tourists in Iceland thanks to its wealth of natural wonders, including the big-hitting names like Gullfoss, Skógafoss, Skaftafell Nature Reserve, Reynisfjara Beach, and plenty, plenty more.

For campervan travellers, there’s nowhere better for a great introduction to Iceland. The views along the south coast of Iceland are some of the most incredible in the entire country, and there’s plenty of diversions to keep you entertained as well, from super jeep tours on glaciers to paragliding over the rugged black sand beaches. For simple road trips in a campervan, the scenery is jaw-dropping. Glaciers, towering mountains and cliffs, cascading waterfalls, and fields of lava carpeted in moss, all of it combines to create one of Iceland’s most vivid regions to explore in a campervan. Here are 10 of the best things to see and do when visiting South Iceland.

1.    Visit the Waterfalls Seljalandsfoss and Skógafoss

The Seljalandsfoss and Skógafoss waterfalls are two of South Iceland’s most famous attractions. Seljalandsfoss falls from a height of 60 meters and is one of the most beautiful in South Iceland, and what you’ll come across first driving along Route 1 towards the south. One of the most distinctive features of this waterfall is that visitors can take a walk around it, admiring the sheer power of the water crashing into the pool below.

Only 30 kilometers further along the ring road in your campervan will bring you to the waterfall Skógafoss. Also crashing down from a height of 60 meters, this waterfall is one of Iceland’s most popular and largest waterfalls, as well as one of its most impressive. The perfect sheet of water adorns many a postcard and is an absolute must-see on a campervan road trip in Iceland. Above the waterfall is a hill with a stairway that takes you to the top, where spectacular views await. 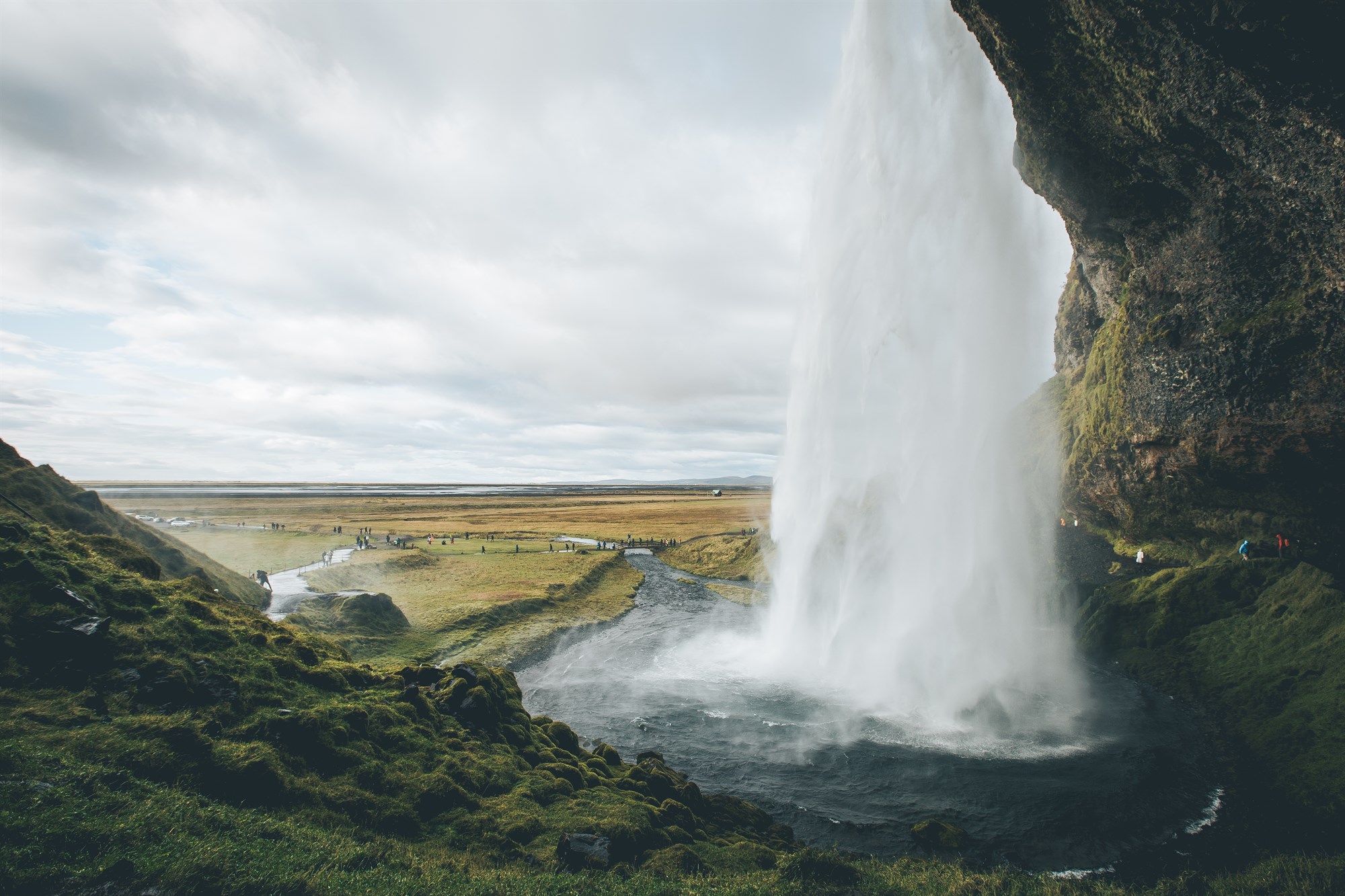 Read more: The Top 15 Most Beautiful Waterfalls in Iceland

2.    Trek to the Abandoned Plane Wreck on Solheimasandur

The Solheimasandur plane wreck has become another popular stop along the south coast of Iceland, known for its dramatic and post-apocalyptic atmosphere. In 1973, this US Navy plane went down onto the sand, thankfully without any casualties. Some reports indicate that the pilot switched to the wrong fuel tank mid-flight, resulting in a crash. Others believe that the plane flat out crashed after running completely out of fuel. Whatever the reason, we can all agree that the remains are spooky, cool, and well worth a visit.

After being stripped of all its useful components, all that remains of the plane is the fuselage. The scenery of the site, however, is breathtaking. Here, you can take amazing photos to preserve the memory of visiting this remarkable site, which has grown in popularity as a tourist destination in South Iceland. To get here, you’ll see a parking area right next to the ring road. After that, it’s about a 45-minute walk (one-way) across the black sand to reach the wreckage.

Seljavallalaug is a well-protected geothermal pool on the south coast of Iceland, and one of the only hot springs in the area. Built in 1923 so the locals could learn how to swim, it’s around 25 meters long and has a somewhat-mild temperature that ranges between 20 to 30°C. It’s not the warmest hot spring by any means, but it is one of the country’s most scenic, nestled in the middle of a remote valley in the foothills of the glaciers above.

In 2010, this hot spring was blanketed in ash from the eruption of the nearby Eyjafjallajökull volcano. A group of volunteers, however, cleaned up the pool and its surroundings using heavy equipment, before it was reopened the following year. Although the pool is located near the Ring Road, a dip here without anyone else makes you feel as if you’re in the most remote of areas. To get here, check out our handy map of attractions around the south coast of Iceland.

Reynisfjara is a famous black sand beach in South Iceland, located near the fishing village of Vík í Mýrdal. This beach is one of the most popular tourist destinations in the country and is commonly regarded as the most beautiful black sand beach in Iceland. Some unique natural features of this beach include the hexagonal-shaped basaltic pillars and the two spectacular sea stacks offshore known as Reynisdrangar, which combine to add an even more awe-inspiring natural beauty to the area.

This beach is perfect for anyone who enjoys birdwatching because of the vast number of seabirds that nest in the cliffs above (including puffin, guillemot, and fulmar colonies). Despite its natural beauty, be sure to maintain a safe distance from the waves when you visit as they can rise abruptly, posing significant risks if you get too close. It was also a popular shooting destination for Game of Thrones.

5.    Take in the View from the Dyrhólaey Peninsula

The Dyrhólaey Peninsula is another of the natural wonders on Iceland’s south coast, located near the village of Vík and previously mentioned Reynisfjara. Dyrhólaey is the name for the peninsula that juts out into the ocean, with paths wandering up the cliffs for commanding views over the entire area. The most prominent feature of this peninsula is a 120-meter-high rock arch which was formed because of centuries of erosion.

Getting to the top for the views can be tricky; you might need a 4x4 campervan, otherwise you can hike. The views are worth it though; from here you can enjoy the breathtaking views of the ocean, distant mountains and glaciers, and black sand beaches stretching away in either direction. For those who enjoy birdwatching, this is an excellent location to see Puffins and Elder ducks, two of the most common bird species found in this peninsula. But you may also find a variety of other species here.

The Westman Islands is an archipelago of about 15 islands 4 miles off the south coast of the country. These islands are truly spectacular, and some of the youngest landscapes in Iceland. The violent formations of lava, rocks, and cliffs are exciting, and are quite different to what you’ll find on the south coast itself.

To get here, the ferry leaves from the South Coast and takes you to Heimaey Island, the largest and only inhabited island in the archipelago. The ferry ride itself is also quite an attraction, as you’ll sail past incredible moss-covered cliffs upon entering the harbour to reveal the quaint town. Exploring the island lets you take in the eruption site, some awesome bird cliffs, and some incredible seascapes. The food in the restaurants is also fantastic. For more information, we go into far more detail about what to see and do in the Westman Islands in this handy guide.

7.    Hike the Fimmvörðuháls Pass into Thórsmörk

The Fimmvörðuháls pass is a popular hiking trail that lies between the Mýrdalsjökull and Eyjafjallajökull glaciers in South Iceland. The trail is approximately 1000 meters above sea level and has a total length of 25 kilometers, taking you from the waterfall Skogafoss into the amazing glacial valley, Thórsmörk.

The hike is challenging and takes generally between 8 to 12 hours from beginning to end. Most hikers take their time, staying overnight in the cabin in the middle of the pass before descending into Thórsmörk the next day. The scenery the entire way is incredible, taking you up close and personal with the glaciers and the Eyjafjallajökull eruption site. For hikers and nature enthusiasts on a camping trip in Iceland, the Fimmvörðuháls pass is a once-in-a-lifetime experience.

Fjaðrárgljúfur is a massive canyon located near the village of Kirkjubæjarklaustur in South Iceland. This vast chasm of up to 100 meters in depth and 2 kilometers in length was formed during the last ice age when a glacial torrent cut across the area. As a relatively new tourist destination, this canyon had just a few visitors; however, it experienced an incredible 80 percent rise in visits from 2016 to 2017, just a year after Justin Bieber’s “I’ll show you” video was shot here.

Thanks to its growing popularity during Iceland’s meteoric rise in the tourism world, certain times of the year the canyon is closed to visitors to let the ecosystem recover. To experience one of the most amazing natural attractions in the world, be sure to include a stop here to your itinerary when visiting South Iceland. 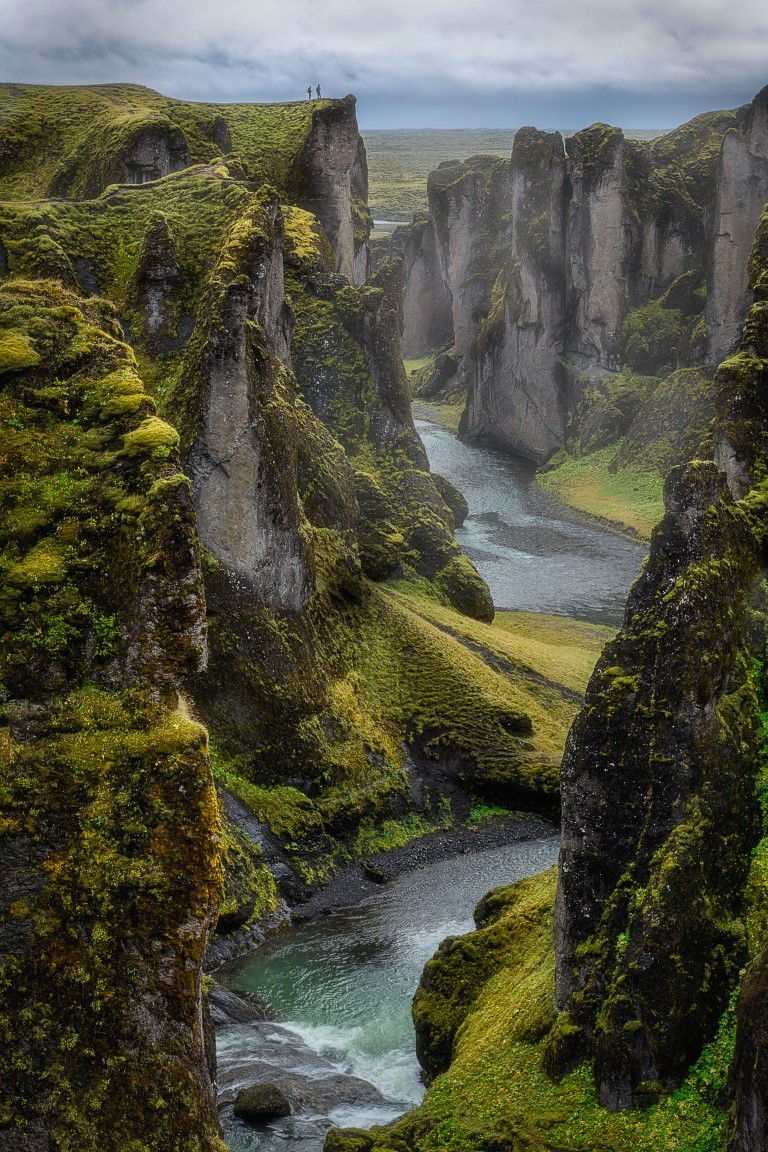 The Katla Ice Cave is situated underneath Mýrdalsjökull, a behemoth glacier that far outsizes its neighbour, Eyjafjallajökull. This spectacular ice cave is ideal for both summer and winter visitors (the only natural ice cave you can visit during summer) and is named after the explosive volcano that also resides underneath the ice: Katla.

The white and blue walls of this 800-year-old ice cave are stained with black volcanic ash from volcanic eruptions. Visiting the cave is an experience in and of itself, but the scenery along the route that leads up to the cave is also breathtaking. Before entering the cave, visitors are normally given crampons, a helmet, and a torch as safety precautions. If you’re planning a campervan trip in Iceland, visiting the cave is a terrific way to spice up your itinerary.

The Reykjadalur Hot Spring River is located out the back of the town Hveragerði and is one of the coolest natural attractions in the region. To get here for a soak, you’ll need to park your campervan at the trailhead and make your way into the mountains on foot. The gorgeous terrain is filled with several geothermal hot spots, where bubbling mud pops and pools of water glow bright blue.

Eventually, you’ll reach the area suitable for bathing, easily recognised thanks to the boardwalks running up and down the river and partitions to get changed behind.  The best time of the year to visit is in the summer. During this period, there is a larger possibility of good weather as well as an increase in the number of daylight hours. Winter periods, on the other hand, make the hike along this trail difficult and often impassable.

Iceland has enjoyed an integral role as a filming location thanks to its fantasy-like landscapes and epic glaciers.