The mind-blowing natural wonders of North Iceland are spread around a vast and sparsely inhabited landscape, located only a few hundred kilometres from the Arctic Circle. Some of the best things to see and do in North Iceland include rugged lava fields, breathtaking waterfalls, geothermal pools, snow-capped peaks, and several welcoming fishing villages.

In a campervan, you could drive along the Arctic Coast Way, unveiling some of the best sites to visit in North Iceland, or you could spend a couple of days exploring the popular Diamond Circle route. It’s here where, in Húsavík, you can go whale watching, hike up one of the country’s most spectacular glacial canyons or delve into the region’s museums to learn about the Icelandic history and culture.

Whether it’s the mind-blowing natural features or the friendly locals, there’s a lot to love about this region. Keep reading to discover the 10 best things to see and do in North Iceland.

Dettifoss is the most voluminous waterfall in Iceland and the second most powerful in Europe after Rhine Falls in Switzerland. It’s one of the sights that make up Iceland’s Diamond Circle and is an absolute must-see for anybody visiting North Iceland.

The waterfall is fed by the river Jökulsá á Fjöllum, which flows from the Vatnajökull glacier, the largest glacier in Europe. The waterfall drops about 45 metres (150 feet) over the edge, with an average of 193 cubic metres of water roaring over every second.

Dettifoss is accessible from the east through Route 864, however, this gravel road is only used during the summer and is suitable for only off-road vehicles. To the west of Dettifoss is Route 862, which is passable by all vehicles. Soon, this road will be paved all the way up to Ásbyrgi.

Lake Myvatn is a beautiful volcanic lake in Iceland’s north-western region and a stunning spot to experience some of Iceland’s volcanic power. The lake itself is extremely shallow, with an average depth of 2.5 metres, with the deepest point being just 4.5 metres. It’s located directly above an active volcanic zone (close to the Krafla volcano) and was formed by a huge basaltic lava eruption 2300 years ago. Hence, the reason why the area is dominated by volcanic formations such as lava pillars and pseudo craters.

The lake and adjoining marshes serve as a breeding ground for a variety of waterbirds, particularly ducks. It also has some of the most amazing geological features, diverse flora, and fauna, and is bordered by many spectacular sights. Spending a day or two in a campervan touring around the lake’s many sights is highly recommended.

There are campsites in the vicinity, as well as a variety of cafés and restaurants. The lake is also one of the main attractions of the Diamond Circle, making it a terrific spot to enjoy other sights and activities.

Tröllaskagi Peninsula is one of the country’s northernmost areas, a peninsula that juts out into the Greenland Sea between the fjords of Eyjafjörður and Skagafjörður. This dramatic peninsula is known for its massive mountains with peaks rising over 900 metres (2,953 feet), making it Iceland’s highest elevation outside of the central highlands. The numerous deep valleys on the peninsula were formed by the rivers that flowed down from these peaks, as well as the movement of glaciers during the last Ice Age’s glacial period. The result? A fantastic spot to spend some time exploring in your campervan.

Despite its high mountains, the lowlands of the area have a sizable population thanks to good fishing and surprisingly rich soil. Riding is a popular activity in the area, also known for large herds of Icelandic horses.

If you want to spend the night away from the other busy tourist regions, this area is the ideal place. The peninsula's main village, Siglufjörður, is located at the northern tip of the peninsula, but there are campsites in Dalvík and Olafsfjörður as well.

4. Visit Akureyri, Capital of the North

Akureyri is a city in northern Iceland, located at the base of Eyjafjörður and backed by gorgeous mountains. Despite its little population of around 20,000, there’s always something entertaining to do in this attractive town, no matter what time of year you visit.

The town is a wonderland during winters, with easy access to fantastic ice rinks and ski slopes, geothermal pools to warm up in, and views of the Northern Lights. During summers, outdoor sports, hiking routes, concerts, and festivals are all available. The best sight in town is probably the Akureyri Cathedral, established in 1940. Designed by the same architect behind Hallgrímskirkja in Reykjavik, it’s an icon of the city.

5. Hike the Rim of Ásbyrgi Canyon

Ásbyrgi canyon is a beautiful horseshoe-shaped depression in the northeast of Iceland, located at the northern tip of this part of Vatnajökull National Park. Spanning approximately 3.5km in length and 1.1km in width, this is a big canyon. From above, it looks as if it was carved into the earth – at the base of the horseshoe, the canyon walls stretch up over 100 metres high. It’s here where you’ll find a dense grove of birch and willow trees, alongside a scenic pond, Botnstjörn.

The canyon was likely formed by devastating glacial flooding of the Jökulsá á Fjöllum river, right after the last Ice Age, about 8 to 10 thousand years ago, then again around 3000 years ago. Icelandic legend, however, suggests that the canyon was formed when Odin’s eight-legged steed, Sleipnir, galloped through the sky and planted one of his feet on the earth here, creating the horseshoe shape.

Ásbyrgi has one of Iceland's best camping grounds and is an excellent place to stay for a few days if you're on a camping trip in Iceland. Hiking is the name of the game here, and there are plenty of fantastic trails to enjoy – including one that takes you to the top of the impressive rim.

6. Take a Dip in Iceland’s Most Scenic Infinity Pool at Hofsós

Hofsós is a small village on the banks of Skagafjörður in North Iceland that bustles with tourists and seasonal residents during the summers. Hofsós Swimming Pool is a stunning infinity pool built into a hillside with views over Skagafjörður toward Drangey Island. This is no doubt one of the best swimming pools in the country.

The design is fantastic, and swimming in the geothermal waters of the pool gives the sense of being extremely close to the sea. Despite its popularity with tourists, the Hofsós pool is quiet and mostly used by locals, giving it a distinct charm in contrast to other busier hot springs in Iceland. Visiting this pool will undoubtedly be a worthwhile experience.

Húsavík is one of the oldest settlements in Iceland, located on the eastern bank of Skjálfandi Bay. It has been dubbed the “Whale Watching Capital of Iceland” due to the different species of whales that frequently enter the bays.

As many as 23 whales of different species have been observed in or around Skjálfandi Bay, including the blue whale, humpback, minke whale, harbour porpoise, and white-beaked dolphin. Whales have been seen on 98 percent of all whale-watching tours in recent years, and the blue whale, the largest mammal ever known to have existed, is a frequent visitor to the bay. Humpbacks are also among the most interesting species to observe here because of their playful nature and fantastic acrobatic displays. Seeing all these animals in the wild is a truly breathtaking experience. 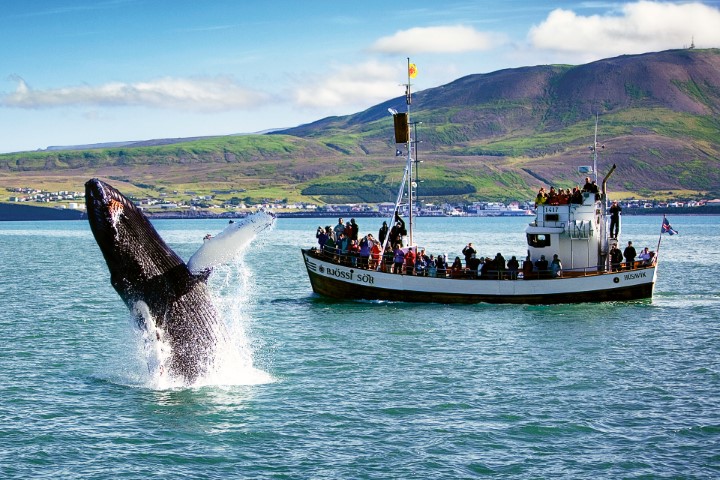 Goðafoss is one of Iceland’s most stunning waterfalls, located along the river Skjálfandafljót. The river flows from the Icelandic Highlands, through the Bárðardalur valley, before finally cascading down near the ring road as Goðafoss. The picturesque landscape around the waterfall is simply breathtaking, especially in the winter when the northern lights make an appearance at night.

According to the Sagas, the waterfall was named Goðafoss which translates to “the waterfall of the gods,” in the year 1000. This was when the law speaker, Þorgeir Ljósvetningagoði, threw his statues of pagan gods into the falls after making Christianity the official religion of Iceland.

Most visitors to Iceland usually look for its cultural and natural attractions along the Ring Road. However, the scenery along the less-travelled Arctic Coast Way is equally stunning and inspiring. The driving route, which was developed in 2019, connects existing roads in Iceland’s rugged north to make one epic road journey. Ideally, you can go on a campervan trip and spend several days on the road from May to September. Winter travels are also possible, but snowfall and harsh weather conditions may trouble you.

The Arctic Coast Way begins in the village of Hvammstangi, following the coastline of the northern peninsulas, passing through fishing villages along the way before ending at the far-flung hamlet of Bakkafjörður in the northeast. For easy navigation of the gravel roads, a 4x4 campervan would be ideal, although not necessary.

10. Bathe in the Grettislaug Hot Pot

Grettislaug is a hot geothermal pool in northern Iceland on the shores of Skagafjörður. It offers breathtaking views of the surrounding mountains and sea, as well as Drangey Island. The pool got its name from Grettir Ásmundarson, the strongest man in the Icelandic Sagas who is reported to have swum 7.5-km from the island of Drangey just to warm up in the pool.

Although it looks natural enough, Grettislaug is a man-made pool. There used to be another hot pool called Reykjalaug as well, but both were destroyed in a storm in 1934. The pools were rebuilt in 1992 by a farmer named Jon Eiriksson along with a group of locals. Reykjalaug did not retain its name; it was instead called Jarl’s pool (Jarlslaug) after Jon, who was nicknamed “the Jarl of Drangey.” There are dressing rooms on-site, and because the pool is on private land, you will have to pay a small entrance fee. In the area surrounding the hot springs is a guesthouse, café, and campground. The area offers gorgeous scenery and is an ideal spot for a campervan trip in Iceland. 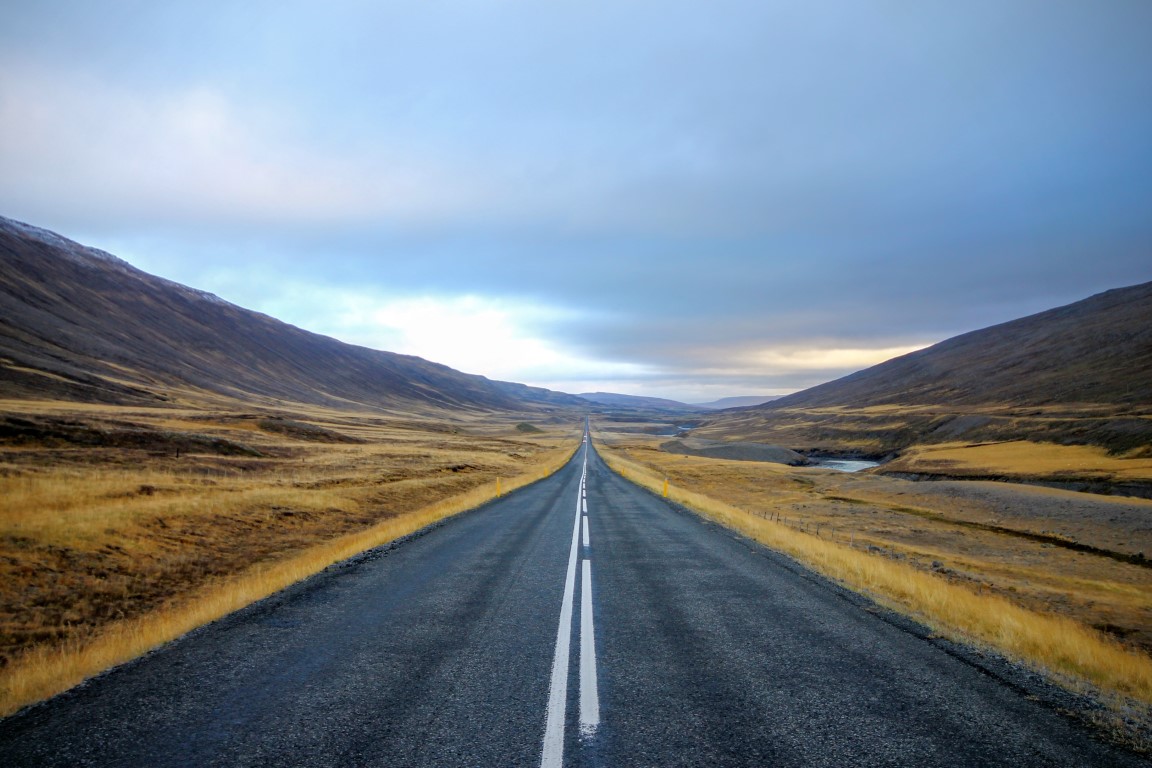 The 10 Best Campsites in Iceland

One of the best ways to soak up the stunning Icelandic nature is through a campervan trip. Here are the best campsites in Iceland.

Black sand beaches in Iceland are dramatic locations to experience Iceland’s beautiful nature – find out everything you need to know.