The Northern Lights in Iceland

Dancing across the Icelandic sky in the wintertime are the northern lights, also known as the aurora borealis, one of the biggest attractions of the season and a bucket-list item for many a traveller on their trip to Iceland. This natural phenomenon should be seen at least once in your lifetime because it’s always going to be an unforgettable experience, and Iceland is one of the best places to do it.

We get many questions from campervan travellers who wonder when the best time and place is to see the northern lights. We’ve created this guide to give you all the useful information to give you the best chance while you’re travelling in Iceland in the wintertime. So let's jump right in!

When Are the Northern Lights in Iceland?

The season in Iceland generally runs from mid-September until mid-April. This is the best time to visit Iceland to see the aurora borealis. However, every year can be different than the other because the sun's activity can change; sometimes the lights can be seen as early as August and as late as May if there is enough solar activity.

Generally, there’s a chance to see the lights in the wintertime between 9pm and 5am. But from my own experience, they’ll appear even earlier – I’ve seen them at 8pm, 7pm and even 6pm!

My tip: Be prepared from 6 pm to 1 am, as they can appear at any time between these hours! But most of the time I’ll see them between 9pm and 1 am. 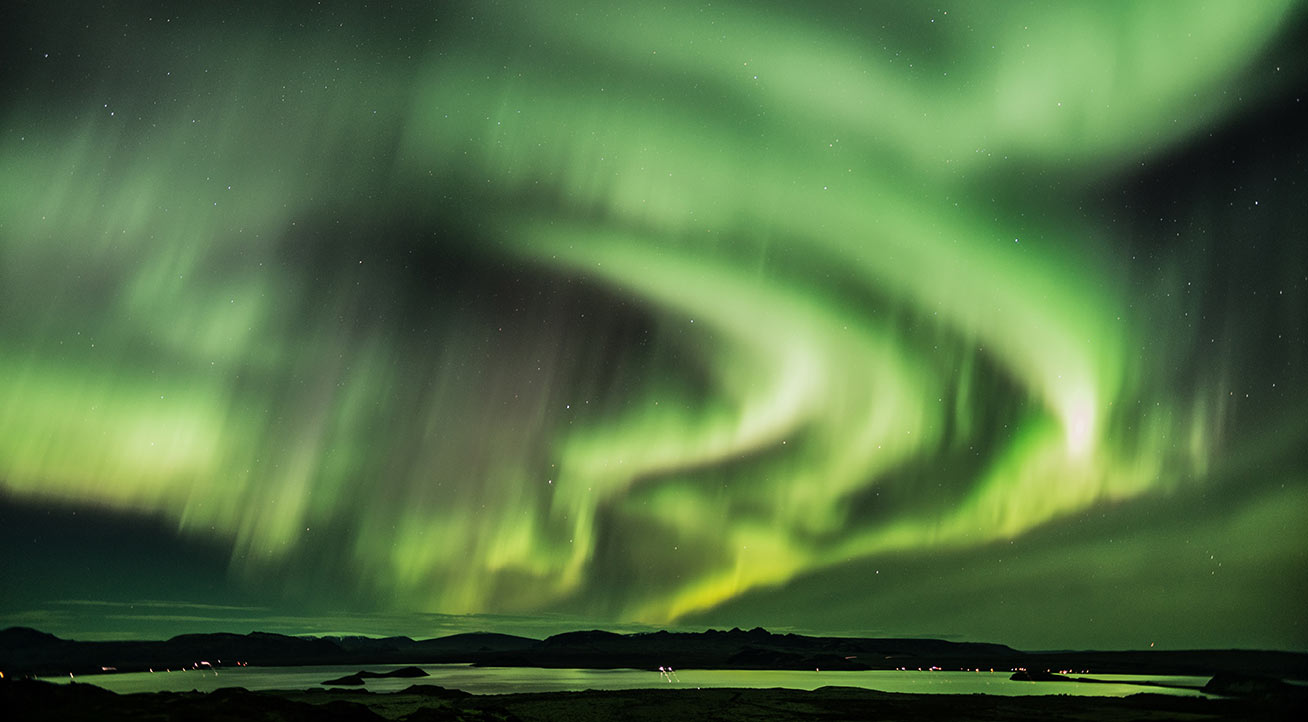 What Are the Northern Lights?

Streaking across the winter nights, the northern lights in Iceland are a sight to behold. But what exactly is happening when we see the aurora borealis in Iceland?

As the sun shoots out solar particles toward the earth, they enter the atmosphere around the magnetic poles. Once they've entered the atmosphere, the particles are ionized, most often turning them green, but sometimes pink, purple, red, orange, or blue.

It's important to note that the particles that cause the northern lights in Iceland are the result of solar flares on the sun. These don't always happen - which is why even during a clear night, you might not get to see the lights. It also means that the aurora could be happening in the middle of the day, but invisible to the human eye.

Where is the Best Place to See the Northern Lights?

People often ask us at Go Campers if the northern lights are visible in Reykjavik. And while it’s the one location with the most light pollution in the country, there are often times when they are completely visible dancing across the sky over Reykjavik. For this to happen, the activity of the sun needs to be very high, the solar winds extremely fast, and the sky relatively clear. If all these things align, then you can see them in the city.

But for the best experience with the northern lights, it’s always better to see them streaking across the sky over one of Iceland’s incredible landscapes – away from the city and the lights. We've rounded up the 10 best viewing locations for the northern lights in Iceland.

It’s important to remember that there’s no need to be up on a high point to improve your chances of a sighting. You should remember that during the Icelandic winter, weather can be difficult and walking up the hill or hiking up mountains just for a chance to see the northern lights is too risky. You can still see them from the ground, and even from inside your cosy campervan.

Our top tip: Find a good spot on the map during the day and try to get there on time. Driving a camper during the night and trying to find a good spot can be stressful if the lights are already out overhead – you don’t want to be in a rush!

You never know when the aurora borealis will show up, so plan your trip earlier, go to your location, and wait. And remember that Iceland's aurora season is also when the weather can be at its most dramatic.

Here we present a very well-worked video explaining where and when to see the best northern lights close to Reykjavik.

Watching the Northern Lights From the Blue Lagoon

Of course, there are some extra special locations to watch the northern lights from. The Blue Lagoon is one of the most popular - booking your entrance for the night during winter gives you a good chance.

This is also the case for other luxurious hot springs around the country, such as the Sky Lagoon in Reykjavik, the Myvatn Nature Baths, or the new Forest Lagoon in Akureyri.

Another option to try and catch the aurora borealis in Iceland is to join a small group tour. These leave from Reykjavik, driving you out to locations where there is a good chance you might see them. If you have a couple of days in the city before or after your campervan trip in Iceland, this might be a good option.

How to Tell if the Northern Lights Will be Out

For the aurora forecast in Iceland, you can head to the Icelandic meteorological office website: https://en.vedur.is/weather/forecasts/aurora/. On the bottom of the map you have the hours of the night – move the slider from 8pm onwards, taking note of the level of the ‘Aurora forecast’ on the right-hand side. The Icelandic meteorological office uses the kp index forecast as a simple scale for Aurora activity.

The higher the number the better, but you can see the lights even from level 2. You can also view the cloud cover in more detail on this website. To maximize your chances to see Iceland's northern lights, clear skies are best.

If there’s a good level of activity, the next thing you need to take note of is your chosen area to view the lights. If there is green colour over that part of the country, unfortunately, this means that the sky will be covered with clouds. You won’t be able to see them, so you should change your destination. If you’re changing destination at the last minute, remember to check the condition of the roads you’ll be taking: www.road.is

Don’t go in expecting enormous dancing green auroras, as they only come around every so often (if you don’t go in expecting that, you’ll never be disappointed!) A lot of the time they’ll just be bright-looking clouds with a green sheen. But if there has been a solar storm and the forecast is strong, huge streaks can appear out of nowhere, shimmering across the sky in huge waves. If you are lucky enough to see a real active light show, they can turn white, pink, and sometimes even purple.

Everything depends on solar activity and cloud cover. We can’t turn them on and off (we wish we could😊).

Universal things for everyone looking to catch the northern lights in Iceland? Warm clothes, and most importantly, thermal layers! You’ll also need good winter shoes, hand warmers, a charged phone with service, and hot tea or coffee to pass the time. You'll want to be as bundled up as possible to stave off the cold weather conditions while waiting for the aurora activity.

Take camping chairs, hot tea or coffee, and enjoy the night sky. Other things that are important are service on your phone, good winter tires, and being aware of where you park your camper – you don’t want to get stuck in the snow (keep up to date on the road conditions at www.road.is).

While you might not necessarily need a 4x4 campervan to get to most locations, we do have them in our fleet of campers if you want to feel more secure in your excursions.

How to Photograph the Northern Lights

If the lights are strong enough, you’ll be able to capture photos of them with just your smartphone (although it’s likely to just be a green blur). For more professional photos, you’ll need a tripod for long exposure shots, a good camera that has the option for adjusting the settings manually, a wide bright lens, charged battery, memory cards, and good gloves that both keep your hands warm and let you operate the camera.

For more information about photographing the aurora borealis in Iceland, we’ve written a detailed article on the subject.

To give you the absolute best chance of seeing the northern lights in Iceland on your campervan trip, we recommend a minimum of 7-10 days. 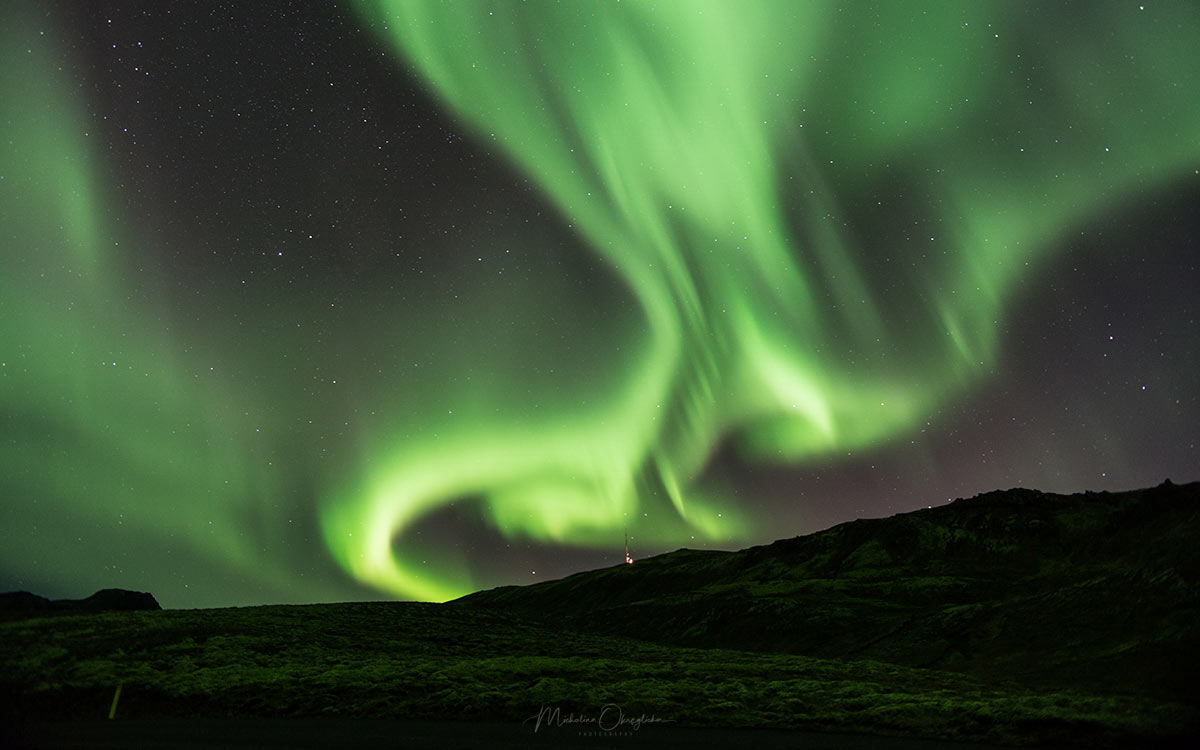 This guide will explore the best things to see and do along Iceland’s south coast for campervans.