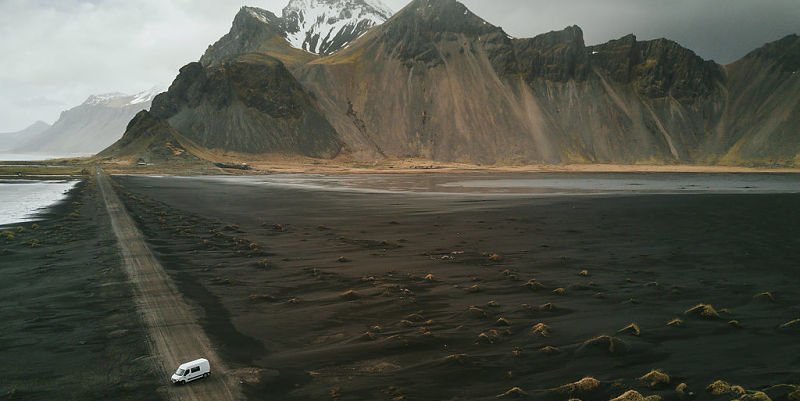 Untouched and wild, it’s all about slow travel and good weather in Iceland’s most underrated region: The East Fjords. Most travelers will pass this by on their ring road camper trips, keen to make their way from Jökulsárlón in the south to Myvatn in the north. But if you’re looking to leave the crowds behind and discover your own adventures, the East is the place to do it.

This is the first sighting that the Vikings had of Iceland – the impressive mountains that come down right to the coast are some of the biggest in the country, the fjords some of the steepest. The ring road here snakes its way through the deeply-cut and narrow fjords, taking you through forgotten fishing villages and past valleys leadings towards the bleak interior and the behemoth Vatnajökull glacier. And thanks to its distance from Reykjavik, you’ll find it all pleasantly empty.

How Much Time Will You Need?

Putting aside 3-4 days to travel through this region will give you plenty of time to visit some waterfalls, traditional farms, the small fishing villages strung along the coast and undertake some interesting hikes as well. The more time people spend here, the more they tend to fall in love with the quiet area.

You’ll find some semblance of a supermarket in most towns, although if they’re small and local they’re likely to be a bit more expensive than usual. You’ll find the cheap Bonus Supermarket in the unofficial capital of the region, Egilsstaðir, and a Kronan supermarket in Reyðarfjörður just 30 minutes’ drive south.

One of the best things to do in the East is just drive through the fjords. Only recently did the route 1 change to help you do this, as it used to cut inland and go up to Egilsstaðir and missed a lot of the impressive coast line (now marked as road 95). In most towns you’ll find walking trails with varying degrees of difficulty,

Hengifoss is Iceland’s third tallest waterfall, famed for its red and black basalt rock that you can see behind the water. At the end of a long valley, the steep hike up to the falls is 2.5km, taking around 45 minutes. On the way you’ll be able to see Litlanesfoss as well, a smaller waterfall surrounded by the distinctly Icelandic basalt columns that you can find at other locations around the country, like Reynisfjara beach in the south or Svartifoss waterfall in Skaftafell Nature Reserve.

Fardagafoss can be found just off the road on the way from Egilsstaðir towards Seyðisfjörður. It’s about a 30-minute walk from the parking lot to the thundering falls. Keep an eye out for fresh berries growing along the way.

Lagarfljót is Iceland’s answer to Loch Lomond in Scotland; this mysterious lake just next to Egilsstadir is said to have a monster lurking in its depth, akin to the Lochness Monster. Various eyewitness accounts over the years have shaped the image of the monster, a supposed worm-like beast that sometimes likes to sunbathe on the sand of the lake.

Hallormsstaðaskógur is Iceland’s largest forest, and an important and precious area for a country that’s devoid of trees in most other places. Beautiful walking trails, picnic areas and campsites can be found all through the forest. In the summertime, it’s obviously one of the most popular spots with Icelanders who like to get outdoors in the good weather that East Iceland sees.

Vestrahorn just outside of Höfn is one of the most photographed mountains in Iceland. Take the road marked to Stokksnes to find a beautiful black sand beach with tufts of grass growing on it, in the background the majestic mountains.

Stórurð is one of the more well-known spots in the East. Also referred to as ‘The Giant Boulders’, Stórurð isn’t any one thing; it’s the area. Just to the west of a small glacier along the Dyrfjoll Mountains, the hike from the parking spot on the road to Borgarfjörður Eystri will take you about 2.5 hours. Along the way you’ll pass by some beautiful meadows, gushing streams and intimidating mountain peaks; two of which once represented the gateway to Hell for local Icelanders in the area. The final destination of the hike is an area of large rocks strewn about glittering glacial pools of teal.

Papey Island is just off the coast of Djúpivogur and could quite well be the very first place in Iceland that was inhabited by humans. Named after the Irish Monks (papar) who were the first to settle here, possibly in the 8th or 9th Century, on this small island you’ll find Iceland’s smallest church and a large colony of puffins and guillemots. To get here you can catch a ferry across from Djúpivogur, which will also come with a tour guide who takes you around the island.

Borgarfjörður Eystri is another spot where you’ll be able to get up close and personal with Icelandic puffins. The viewing point is one of the best in Iceland, with an inside part to keep you warm on those extremely windy days.

For the avid hikers, this is also one of the best spots to base yourself. Hiking over the peninsula into the abandoned bays to the east will provide you with some much-needed solitude, and there are multiple trails. For something more long-distance, you can attempt the 3-day hike all the way down to Seyðisfjörður.

The wildlife in the region is rich and varied. On the coast you can often find seals, particularly on the boat out to Papey Island. Hikers often report seeing whales splashing in the waters off the coast, traversing their way up and down the fjords. Of course, there are the two big puffin colonies in Borgarfjörður Eystri and on Papey Island. East Iceland is also the only place in the country where you can see reindeer. Norwegians originally brought them over to farm, an industry that never took hold with Icelanders. Now, the population of about 3000 reindeer is strictly controlled, but mostly left to roam throughout the East. They’ll come down closer to the coast in the winter time and head back up to the desolate plains of the highlands near Mt Snæfell in the summer.

As mentioned above, Egilsstaðir is the unofficial capital of the Eastern region. Built as a service and supply point for the main route 1, life here moves quite slowly. It can feel busy at times, as it’s the main intersecting point for people catching/departing the ferry that arrives in Seyðisfjörður, just over the mountain pass to the east. The campsite is right next to the tourist centre in town, which could be possible the busiest in the entire country during the summer months.

Seyðisfjörður itself is a great little town, deserving much more than a passing glance. Its here where the ferry from Denmark docks, unloading travel-hungry tourists into the small town of just under 1000. Founded by Norwegian fisherman in the late 1800s, the town’s buildings are all very colourful and prefabricated, all of them with an interesting history. The beautiful pale-blue church is very photogenic with a rainbow road leading to the front door, and there’s an amazing sushi restaurant that uses the fresh ingredients brought in by the fishing boats called Norð Austur.

The small towns along the fjords south of here are all very old fishing villages with a lot of history. There’s Fáskrúðsfjörður, originally built in the mid-1800s by French fisherman, and Djúpivogur has committed to the slow-lifestyle and slow-travel way of life. In Breiðdalsvík you can find the Beljandi Brewery, a local pub that serves beer to the reindeer hunters and locals from neighbouring fjords.

Höfn is at the very bottom of the East, with commanding views of the spectacular Vatnajökull glacier. The town is famed for its lobster, so make sure to get some or sample the local lobster soup before you move on - it’s considered some of the best in Iceland.