Music has always been an important part of the culture in Iceland, and the quality and number of local bands and artists that emerge into the international spotlight is incredible for the country’s small population. Music festivals in Iceland always showcase the best of the country’s artists and have more recently been attracting bigger international acts. Here are the top 10 music festivals to attend in Iceland.

Every November Reykjavik transforms into a city that lives and breathes music for the annual Iceland Airwaves music festival. The incredible event takes place over four days, with hundreds of bands and artists descending on the city from abroad and around Iceland for the biggest festival on the Icelandic calendar. Established Icelandic artists such as Björk, Sigur Rós, and Of Monsters and Men have all played the festival, as well as international acts such as the Flaming Lips and Mumford and Sons. Bars, restaurants and public spaces across the city play host to the eclectic mix of artists that come together, meaning that you’ll see these artists play in a venue you’d never think of. For those who miss out on a ticket, there are plenty of ‘off-venue’ places where gigs are held with no entry fee.

Held over three of the longest days in the year at the end of June, Secret Solstice is Reykjavik’s ‘midnight sun’ festival. Drawing both big name international artists as well as the up-and-coming local acts, this is Iceland’s biggest summer festival. Held in the spacious Laugardalur valley recreation area right, the festival has seen some of the most memorable performances in Iceland over the past years, such as sets from the Foo Fighters, and Black Eyed Peas. Punters can choose to camp on site for the full-on experience but be warned: it will be loud and busy.

Every year as winter fades into spring, Harpa Concert Hall plays host to Sónar Reykjavik, a mind-bending festival of electronica, techno hip hop and dance music. The festival provides a breath of fresh air into the capital during the long and dark winter, and usually features a star-studded list of both local and international electronic artists and DJs, focusing on getting people dancing to heavy and avant-garde beats. The 2019 edition of the music festival was cancelled after WOW Air went bankrupt, meaning that almost half the guests and artists attending weren’t able to get to the country, but it will be back for 2020.

It wouldn’t be a Scandinavian country without at least one music festival dedicated to heavy metal, thrash and hardcore punk, and Eistnaflug is just that. Taking place over four days in the town of Neskaupstaður in the East Fjords, there couldn’t be a more remote and beautiful location for this mix of incredible and heavy music. Featuring international acts as well as Iceland’s most famous metal bands, a genre that thrives in the dark sub-arctic region of Scandinavia, those that go to the festival are treated to some intense head-banging sets and memorable moments. It’s not as scary as it sounds though; good behaviour is one of the main focuses of the festival, and the town loves hosting the audience and artists every year.

Not one that many foreigners go to, but one of the most memorable festivals in the country is the Westman Islands’ National Festival, also known as Þjóðhátíð. Every year in August thousands of Icelanders descend on the campground on the Westman Islands, the natural amphitheatre serving as the site of a raucous music and culture festival. Hundreds of tents spring up in every open spot, and the best of Iceland’s artists play on the stage. Every year there’s a song that is written for the festival, which is played long before and after the actual weekend takes place. Another highlight is the singing along to the Icelandic folk songs, as an artist with an acoustic guitar plays them out from the stage, and the lighting of huge bonfires that can be felt all the way from the campsite.

Translating to ‘I never went south’, the Aldrei fór ég Suður festival takes place each year over the Easter weekend in Isafjordur, the capital of the Westfjords. Started in 2004, the festival is one of the biggest on the annual calendar of events in the region, and routinely attracts some of the best local acts from around the country who take to the stage over two days. The best thing of all is that it’s completely free. The idea was born from the artist Mugison, a Isafjordur local who was in London with his father when they decided to try and create a music festival in their home town.

Another big music festival held in a tiny East Iceland fishing town, Bræðslan is held every July in an old fishing factory in Borgarfjörður Eystri. Icelanders from across the country road trip to the small remote town in the east, which has a population of only around 100 people. The line-up might be small, but it usually packs a punch with some of the most popular Icelandic artists of the year choosing to take part. If you’re after a truly Icelandic music festival experience, then this one is for you. Just be careful on the drive over; the roads are still gravel.

A relatively new music festival on the Icelandic circuit, Dark Music Days is all about showcasing new and contemporary music in the depths of the Icelandic winter. The main venue is in the Harpa Concert Hall, but there are also performances at select venues scattered around downtown. It started in 1980 as a platform for Icelandic composers to present their work but has evolved into a festival that pushes the boundaries of experimental sounds and composing. Artists and composers come from both sides of the Atlantic to perform, and it’s an incredible mix of digital, experimental and classical sounds.

Held the weekend before Easter, the Reykjavik Blues Festival is exactly what it sounds like: the best blues artists from both sides of the Atlantic coming together to perform over three days. With both up and coming artists as well as legends in the genre, this festival is filled with twanging guitars, foot-thumping beats and groovy tunes. Improvised sets and spontaneous performances are the norm and after the concerts are over for the night, there’s usually an after party at a bar for some late-night whiskey-swilling blues action.

For a taste of traditional folk music, get yourself over to Siglufjörður in July. Taking place over four to five days are performances from Iceland and Scandinavia, you’ll see harp concerts, jazz quartets, choirs and traditional Icelandic folk songs performed in various locations across the pretty town, like in the famous pale-blue church (at the end of the rainbow road). Also on the program are exhibitions and cultural performances. 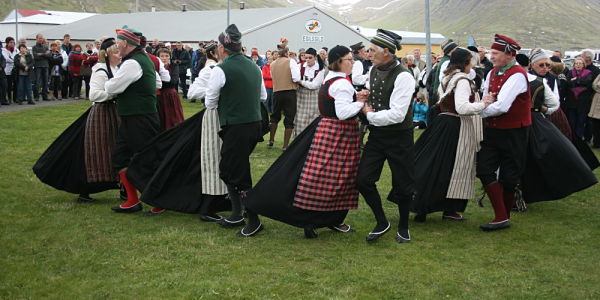 What to See, Do and Eat in Akureyri: Iceland’s Capital of the North

Visiting Akureyri whilst on a campervan trip around Iceland is a special treat for many. With plenty to see, do, eat and drink, it’s a city that deserves some exploration.