Lake Myvatn is one of those special places in Iceland that demands you stop, get out and have a look around on foot. Located in North Iceland, the volcanic oasis is full of contrasts and fascinating landscapes, with plenty of great hiking trails throughout it all. From lava fields to hot springs, calm lakeside trails and epic mountain climbs, Myvatn has it all.

One of the easiest trails you’ll want to do at Lake Mývatn is to weave between the Skútustaðagígar craters. Located on the southern side of the lake, this strange collection of craters juts up from the ground like an alien formation. In reality, they’re the last remnants of a different lake that was here before Mývatn was created through an eruption. As lava flowed over the water of the former lake, pockets of steam formed and subsequently burst, forming the craters you see today.

Hiking around the craters will take maximum 1 hour. There’s a short trail that circles the pond in the centre, and you can climb up to the top of some craters to get views over the landscape and lake.

Expansive, chaotic, and spectacular, Dimmuborgir (dark towers) is a lava field like no other in Iceland. Named for the tall pillars of lava that soar over you, it’s one of the popular stops around Lake Mývatn. These pillars were created about 2000 years ago, when lava flowed over what was here before – commonly believed to be either a lake or a marsh. As the water below started to boil, jets of stream shot up through the lava, which cooled into the lava formations.

There’s a map at the Dimmuborgir parking area that details the hiking routes through this spectacular lava field. A quick loop takes only 30 minutes, but we recommend taking the longer 1-hour loop to see the well-known ‘church’ formation: an opening through a large chunk of lava, with a tall dome-shaped roof inside. A trail also links Dimmuborgir with Hverfjall (next on the list) and Höfði, a quiet area on the shores of then lake perfect for bird watching.

The tall crater that dominates the eastern side of the lake is Hverfjall, a 2700-year-old relic from a huge eruption in the area. It rises 452m from the ground, and at its widest is 1040m across; it’s the biggest highlight in the area aside from the lake itself. It’s steely grey-black sand begs to be climbed, even if you’re just going to take in the view from the top.

An easy trail ascends to the top of the crater from its northwest corner – follow the signs from the main road that leads around the lake. Once you’re there, if you want to loop around the entire crater it will take you about an hour. If you want to string it together with some more hikes, there are also trails that lead to the crater from Dimmuborgir lava field (mentioned above) or Mývatn Nature Baths, which leads you past the Grjótagjá hot spring cave from Game of Thrones.

If you’re looking for more hot springs like the Myvatn Nature Baths, check out this article.

For even more great views over the lake and surrounding area, Mt. Hlíðarfjall just north of Reykjahlíð is a great option. The trail leads from the village straight up the mountain. It’s steep, but after about 30–40 minutes’ of trekking you’ll be at the top. From here, you get views over the lake, and towards the northeast where the Krafla fissure lies.

For an even longer hike, the mountain peak can act as a detour on your way further north to the Leirhnjúkur lava field. Trekking one way will take you anywhere between 3–5 hours, depending on your pace. The lava fields you’ll be passing through were formed in eruptions between 1724 and 1729, a particularly explosive period in Krafla’s life and known as the Mývatn Fires.

There’s no better place to experience the Krafla area than at Leirhnjúkur. A perfect storm of steaming vents, craters, geothermal springs, and ancient lava, it’s easy to feel the elemental power of the area. It all appeared in the early 18th century, as lava spewed out of the nearby fissures for about 2 years. This is also the same spot where the Krafla fires started,

If you’ve driven to Leirhnjúkur (and not walked up from Reykjahlíð, as mentioned above) there’s an easy trail leads you from the parking area around the area. You’ll pass the craters, steam billowing out of vents, and several beautiful hot spring areas before you enter the most recent craters. This is one of Iceland’s most dangerous areas, so always stick to the paths – the general loop will take around an hour. On the northern side of the area, an added trail loops out towards the Hófur crater (1 hour extra), created during the Mývatn fires. 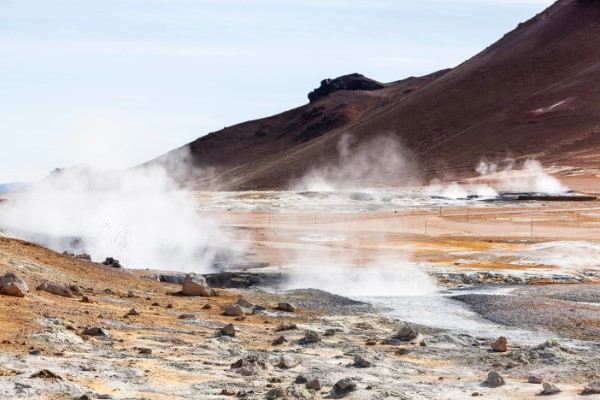 Just to the east of Leirhnjúkur is the Víti volcanic crater. A beautiful pool of sapphire water fills this crater, a remnant from the 1724 volcanic eruptions. A trail loops around the entire rim of the crater, giving hikers great views down towards its base. There’s also a path that gives you access to the bottom – be careful though, as the water is near-boiling. There’s also another nice little detour along the way that leads to the base of Krafla volcano itself, past even more boiling mud pools and steaming hot springs. Stick to the paths.

Located between Leirhnjúkur (above) and the Hverir geothermal area (below), the Dalfjall Mountain route is another longer option in the area. The path begins just south of Leirhnjúkur, and heads through the interesting mountains to the west of the road (Route 863). It takes between 3–5 hours to hike one way, but along the way hikers enjoy amazing views of the volcanic area. One of the more challenging routes in the area that will take up most of a day, but well worth the effort.

One of the most exciting things that you’ll see as you drive around the Ring Road is the Hverir geothermal area. Out of nowhere the landscape suddenly turns a bright orange, scarred with grey mud pots, billowing steam, and bright, contrasting colours. This is one of the highest temperature areas in the whole country, so stick to the paths. A short trail tours through the area, which should take between 30–45 minutes all up.

There’s a little-visited trail that loops from Reykjahlíð, along the northern shore of the lake, and then back to the village. It’s a relaxing walk through lava fields and along the shores of the lake, taking between 2–3 hours. Perfect if you’re short on time but still want to get out and appreciate this beautiful part of Iceland. 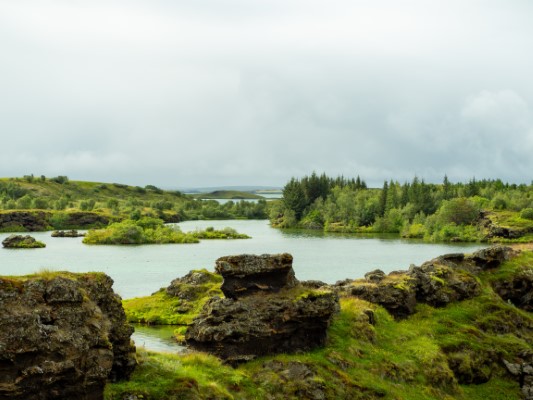