The Golden Circle in Iceland: What You Need to Know

Driving the Golden Circle in a campervan is one of the most popular things to do here in Iceland. With a series of wonderful natural sights all within easy driving distance of Reykjavik, it’s a perfect option for a day trip from the city or to start off a campervan trip in Iceland.

We often get asked if it’s worth doing the Golden Circle, and the answer is a resounding yes! It’s busy, but having your own campervan allows you to spend as long as you like at each stop, and to take a few interesting detours that the tour buses skip over in their rush to return to Reykjavik on time. With a campervan, there are no such stresses. As opposed to renting a car, a campervan can also become your accommodation for the night if you wish.

The entire circle can be completed in one day, making it the perfect route to tackle at the beginning or end of your campervan trip in Iceland. Here's everything you need to know about driving the Golden Circle in your campervan.

What is Included in the Golden Circle Iceland?

Not to be mistaken for the Ring Road, which goes around the whole country, the Golden Circle is smaller and mostly made up of these main sites:

Some other popular stops on the Golden Circle are: 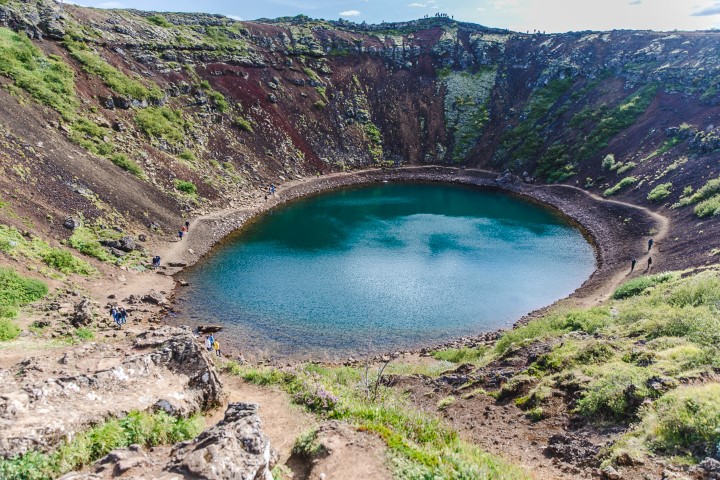 How Long Does It Take to Drive the Golden Circle in Iceland?

The entire Golden Circle Route can be done in one day. In general, a return trip from Reykjavik will take anywhere between 6 to 8 hours. If you’re adding in a few detours, it can take anywhere from 8 – 10 hours to get back into the city.

However, if you’re in a campervan, you’re likely going to be camping outside of Reykjavik after doing the Golden Circle. This dramatically cuts down on the time it will take you to do the entire route, since you won’t have to drive back to Reykjavik at the end of your day.

There are a whole lot of campsites within the Golden Circle area, as well as a few down south on the Ring Road where you emerge after completing it. For more information on campgrounds in Iceland, we’ve created a detailed page about campsites and included a map.

When is the Best Time to Drive the Golden Circle

Day tours of the Golden Circle in Iceland are available year-round, and each season comes with different conditions for the trip.

The Golden Circle in Summer

But with a campervan in Iceland, you’ll be free to come and go to the sights as you please. And with the nearly 24 hours of sunlight in the Icelandic summer, staying out late to explore after the tour buses have left - a tempting idea if ever there was one.

The Golden Circle in Winter

Come winter, the snowy, frozen landscapes of Iceland are like a completely different world. The Golden Circle area is still accessible thanks to some great roads and regular clearing of snow.

It’s important to note that in winter the conditions are very different from summer. Thingvellir National Park might be blanketed in snow. The Geysir still erupts in winter, and parts of the waterfall Gullfoss will be frozen.

The Golden Circle in the Shoulder Seasons: Spring and Autumn

In general, the shoulder seasons of Spring and Autumn are fantastic times to drive Iceland's Golden Circle in a campervan. The crowds aren't as busy as they are in summer, and there's a lower chance of storms, snow, and ice than in winter.

Depending on which shoulder season you choose, the days will either be getting longer (in Spring) or shorter (in Autumn). However, both seasons enjoy dark skies at night, which means there's always a chance to see the northern lights. This would make a fantastic addition to any campervan tour of the Golden Circle. 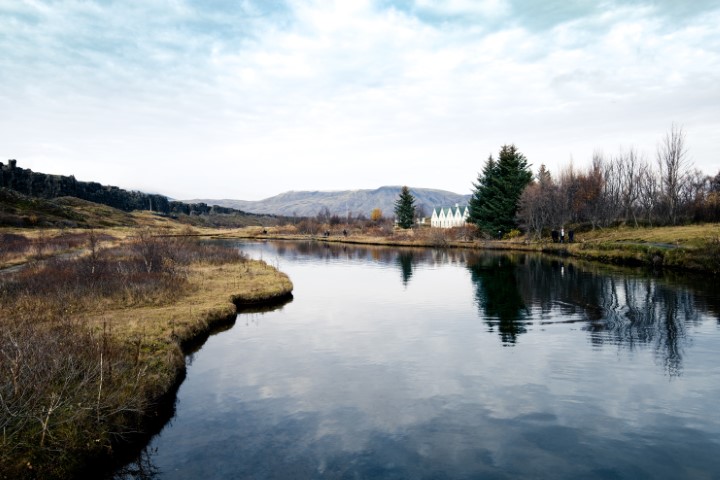 The first stop, Þingvellir National Park, a UNESCO World Heritage Site, is only 40 minutes from Reykjavik. This beautiful area is the historic heart of the country; it was here where the Icelandic Vikings established the world’s first democratic parliament, the Alþingi.

At Þingvellir, there's a beautiful viewpoint to check out before following the path down between the North American and Eurasian tectonic plates. From here, there are several areas to visit. There's the Law Rock, the exact site of Iceland's first Parliament; a cascading waterfall called Öxarárfoss, and several more fissures and historic sites. This isn't a hiking trail, but rather an easy path to follow around for about an hour.

Stops Between Reykjavik and Thingvellir: A not-so-known sight on the way towards the National Park is Gljúfrasteinn. This is the museum of Halldór Laxness (1902-1998) who stands head and shoulders above other Icelandic writers of the 20th century.

If you arrived late and are just looking to beat the Reykjavik traffic in the morning, you can stop at Mosskogar Camping for the night, which is a nice campsite just outside Reykjavik on the way to Thingvellir on the Golden Circle.

A short detour north along Road 48 takes you to the waterfall Þórufoss. It’s a little-visited spot that’s worth a stop.

Diving at Silfra in Thingvellir National Park: The national park is also the location where you can scuba dive between the two tectonic plates. The fissure is called Silfra, and it’s a very popular additional tour to do while exploring the Golden Circle. You can reserve a ticket here.

After Thingvellir, the next stop on the Golden Circle route is the great Geysir in Haukadalur valley, one of Iceland’s famous geothermal areas. The main attraction is the Geysir itself, called Strokkur. Every 4–5 minutes, it will erupt in a plume of hot water, shooting up between 15–20 meters.

There's also plenty more boiling water here, with several pools of various colours giving off steam and bubbles. We recommend making your way to the top of the hill, passing pools along the way, to enjoy a view over the entire geothermal area.

Stops Between Thingvellir and Geysir: If you’re not pressed for time, in Laugarvatn you can soak in the geothermal waters at Laugarvatn Fontana Spa.

Another stop on the way to Geysir is the charming dairy farm Efsti Dalur. This will be fun for children and curious adults. They have a barn and farm animals, plus you can taste their delicious homemade products – including some fabulous Icelandic ice cream.

And just past Efsti Dalur, a small parking area acts as the trailhead to the waterfall Brúarfoss. A muddy trail leads you along the river toward this stunning and secret waterfall, a small but powerful cascade that is a stunning blue colour.

The final main stop on the Golden Circle route is Gullfoss waterfall. This thundering cascade is a sight to behold, crashing over several cliffs into a deep valley that winds its way to the south. In the distance on a clear day, you can spy the highland glaciers, while the mist from the water in the late afternoon sun sends a golden hue over the surrounding countryside. This is why it's called Gullfoss, which translates to 'Golden Falls'.

The Final Stages of the Golden Circle

Gullfoss marks the end of the main attractions along the Golden Circle route in Iceland. Afterward, you’ll want to head south towards the ring road (Route 1) to either head back into Reykjavik or continue along the south coast.

There are two options to get back to Route 1 from Gullfoss. The first option is to take Road 30 towards Flúðir, where you can stop in for a swim at The Secret Lagoon in Flúðir. This is a more low-key alternative to the famous Blue Lagoon, the steamy hot spring on the Reykjanes Peninsula near the capital.

The second option is to take Road 35 in the direction of Selfoss. Along this route you'll pass Friðheimar, a geothermal tomato farm with a restaurant, and closer down to Route 1, the colourful volcanic crater Kerið.

If you are planning to stay overnight in your campervan at the Golden Circle area, there are plenty of campsites. You can see them on the map below.

Iceland is a country that loves a good holiday, and across the year there are plenty of public holidays in the calendar that give Icelanders a chance to take a long weekend camping or visiting their families in other towns.

There are plenty of things to see and do in South Iceland on a campervan trip, one of the most exciting regions in the country.