Iceland is filled with otherworldly sights and landscapes. From volcanoes and lava fields to dramatic gorges and glittering ice caps, there’s a lot to see and do while on a campervan trip around the country. But one of the most popular sights for travellers are the black sand beaches in Iceland.

Fine black sand backdropped by mossy green cliffs and a powerful surf – there’s something that’s magical about these spectral landscapes that can be found on the coast of Iceland. Containing all the drama and beauty you’re coming to Iceland to see, visiting a black sand beach in Iceland on your campervan trip should be on your bucket list.

Here’s everything you need to know about Black Sand Beaches in Iceland, why they exist, and where to find them.

Why Are There Black Sand Beaches in Iceland?

We’ll start off by looking into how these black sand beaches exist. They’re quite a rare phenomenon around the world, but not unheard of. The places where they exist all have one thing in common: volcanic activity.

As you might have heard, Iceland has a lot of volcanic activity going on underground. To begin with, Iceland is set above the Mid-Atlantic Ridge; that means that the western part of the country is above the North American plate, while the eastern end is above the Eurasian plate. These two tectonic plates are drifting apart at a rate of around 2cm each year, causing earthquakes that can often jumpstart eruptions.

Another factor that makes Iceland an especially volcanic place is the fact that it’s positioned over a hot spot in the earth’s mantle. Deep beneath the country, powerful swells in this hot spot send heat and magma rising toward the surface, pushing Iceland’s crust above sea level, and feeding the volcanic systems even more.

The result of both factors makes Iceland one of the most volcanically active places on earth. On average, Iceland experiences a volcanic eruption once every four years. But how does this tie into the black sand beaches in Iceland?

When Lava Meets the Ocean

The answer to that is the lava flows from eruptions. When lava meets the ocean and sizzles into the water, it cools and solidifies into the black lava rocks you’re familiar with. Then, battered by the tides and fierce winds over millions of years, these large lava rocks slowly break down into finer sand; the black sand beaches that exist today.

Where in Iceland is the Black Sand Beach?

The Most Popular Black Sand Beaches in Iceland

Read on to discover the most popular black sand beaches in Iceland and how you can visit them on your campervan trip.

By far the most popular black sand beach in Iceland is Reynisfjara. This beach is located on the south coast near Vik and is a fantastic stop to make as you travel through the area in your campervan. The dramatic scenery is made even more impressive thanks to a huge cliff face of basalt columns and sea caves to explore, although you will have to be incredibly careful of the waves – this is the most dangerous location in the country due to powerful tides, undercurrents, and sneaker waves. 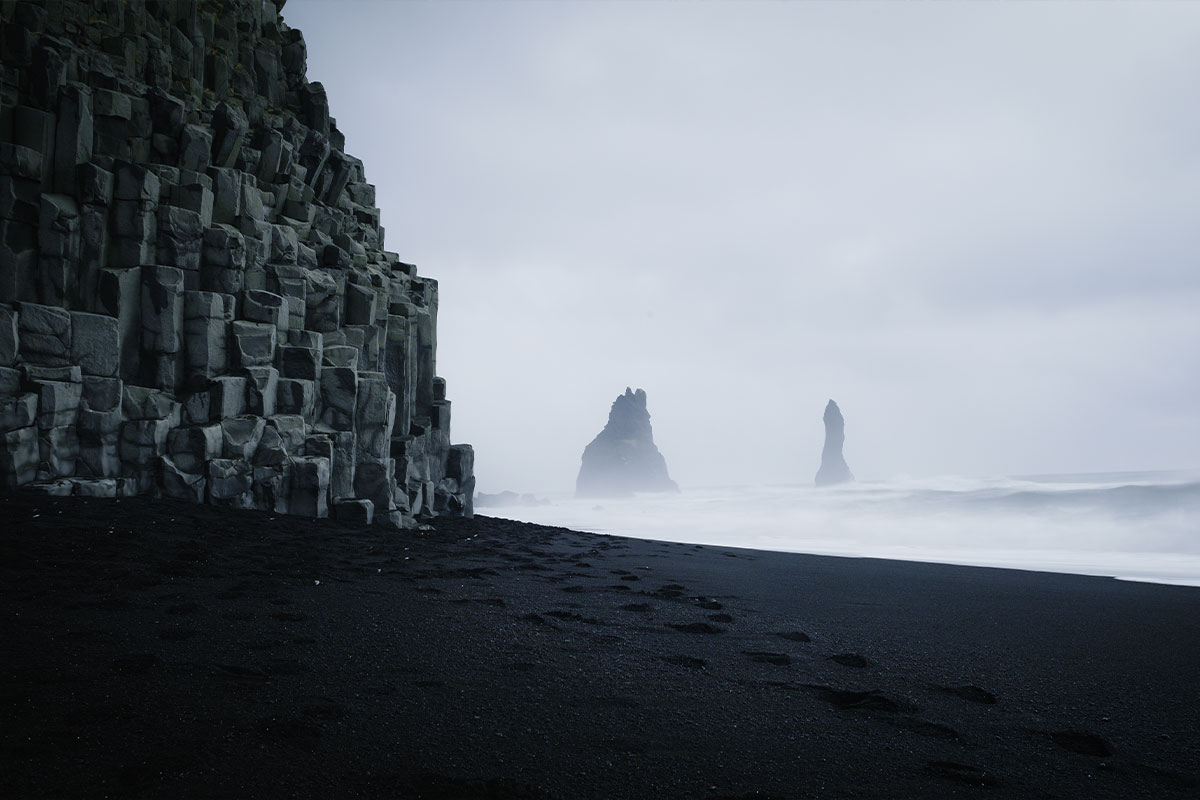 The other famous black sand beach in Iceland that might pop up in a Google search is Diamond Beach. It’s right on the coast opposite Jökulsárlón Glacier Lagoon, another of the most popular sights in the country and a part of the enormous Vatnajökull National Park. This beach is famous because of the large icebergs that are dotted across the shoreline, slowly melting away into the sand.

How Far is Diamond Beach from Reykjavik?
If you were to drive there directly, Diamond Beach is 4 hours and 40 minutes from Reykjavik. The distance is 378km (235 miles). Although we definitely recommend making a few stops along the way – especially as Iceland’s south coast is filled with some of the country’s most fantastic sights.
Does Diamond Beach in Iceland Have Real Diamonds?
There are no real diamonds at Diamond Beach in Iceland. The reason this black sand beach in Iceland gets its name is because of all the icebergs that have washed up onto the shore. Stranded on the black sand, the ice often glints in the Icelandic sunlight, glowing colors of blue, white, and black, resembling a field of diamonds.
Can You Swim at Diamond Beach?
No, you shouldn’t go swimming at this beach either. The water is freezing cold, and like Reynisfjara, the tides and undercurrents can be immensely powerful, making it a bad idea. Stick to the shore and admire the icebergs 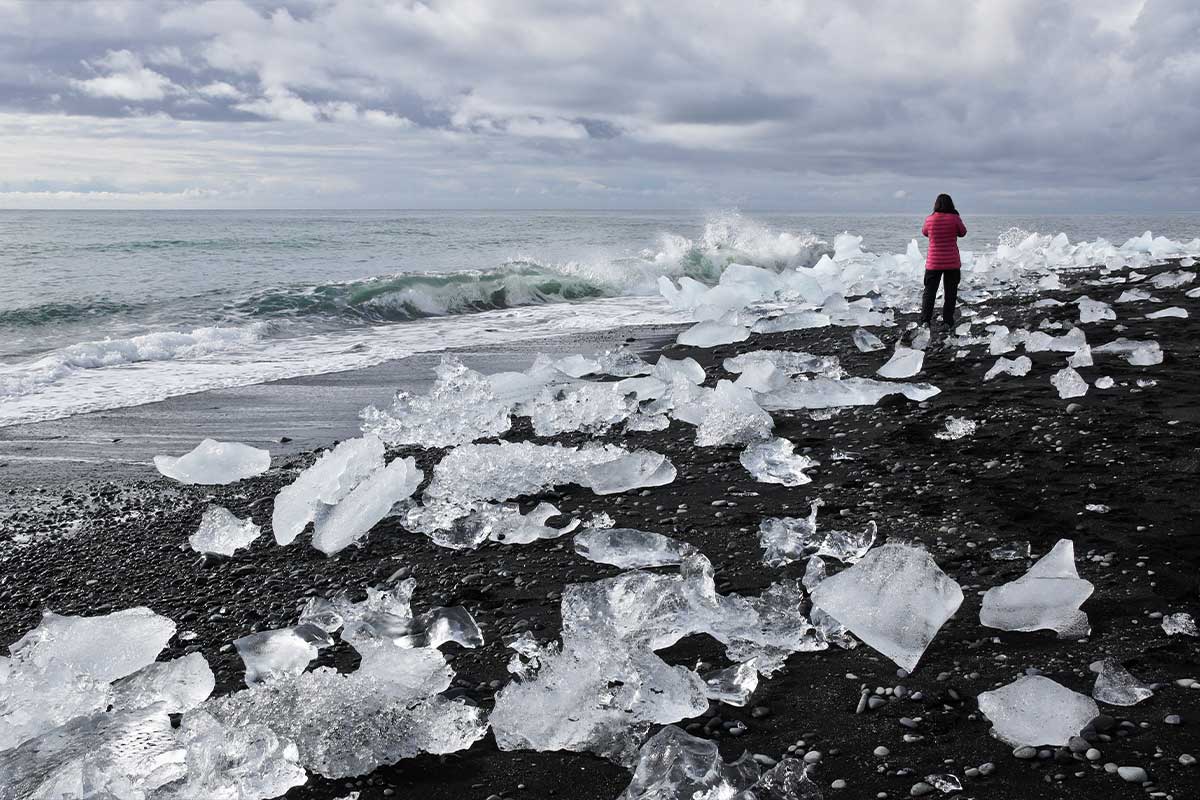 Photographers will immediately fall in love with this black sand beach located in the far southeast corner of Iceland. This peninsula outside of Höfn features a beautiful black sand beach sweeping toward Vestrahorn Mountain, a gorgeous mountain range rising at the edge of Iceland. On the black sand, bright tufts of green grass also add some contrast to the various shades of grey and black. 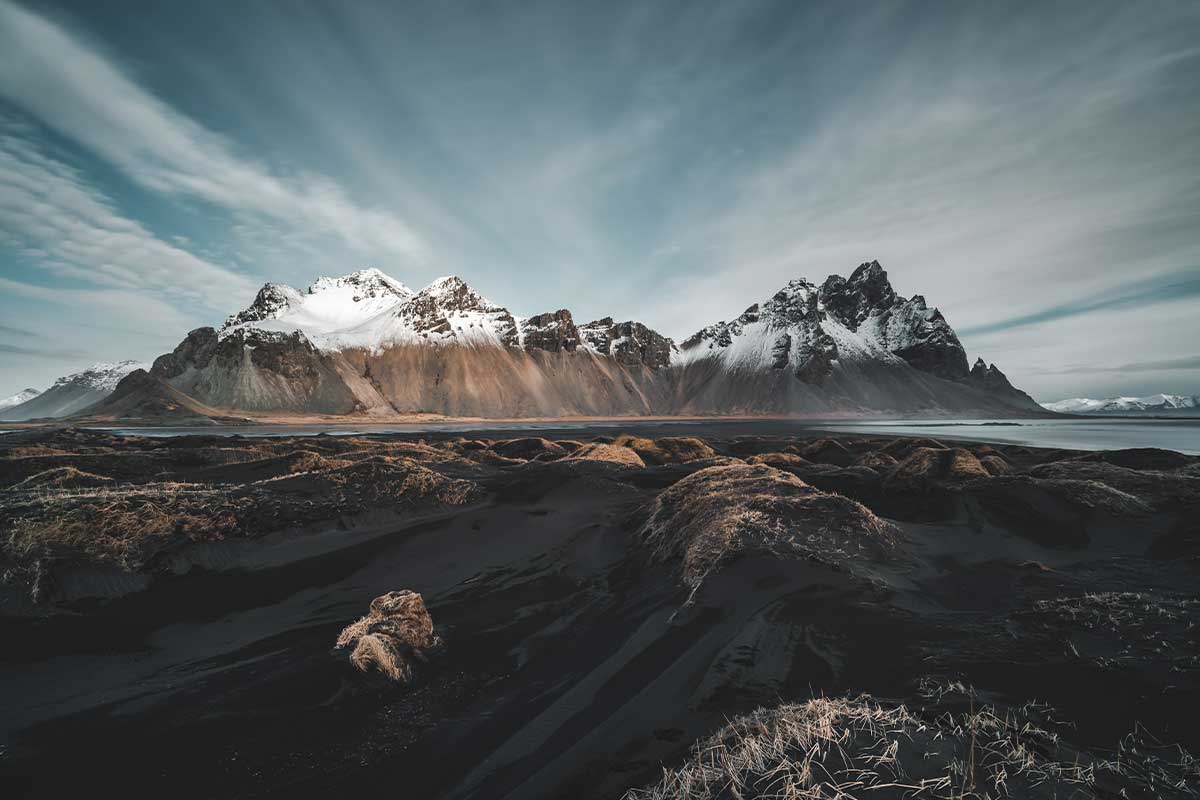 Now onto some of the other black sand beaches that you might visit on a campervan trip in Iceland. In Vik, a popular spot to stay over in a campervan, there’s a beautiful black sand beach. It’s easily reachable from the campsite on foot, or you could park at one of the gas stations and walk down.

Also on the south coast is the stunning location of the Dyrhólaey Peninsula. This is a fantastic stop to make if you’d like one of the best views in the country. Up on the cliff near the lighthouse, the cliffs overlook the long black sand beach stretching away back up the coast.

Another popular Iceland black sand beach is also nearby on the south coast: Solheimasandur. This is the location where you can visit the wreckage of a US Navy airplane that crashed here in 1973 on its way from Höfn to the airbase in Keflavik. To visit the DC3 plane wreckage on Solheimasandur, there’s a parking area directly on the ring road (it’s extremely hard to miss!). From here, it’s around a 45- to 1-hour walk to reach the plane. It’s important to dress for all kinds of weather on this walk, as it’s a desolate place. The apocalyptic-like wreckage of the plane is eerie and perfectly backdropped by the vast expanse of black sand. 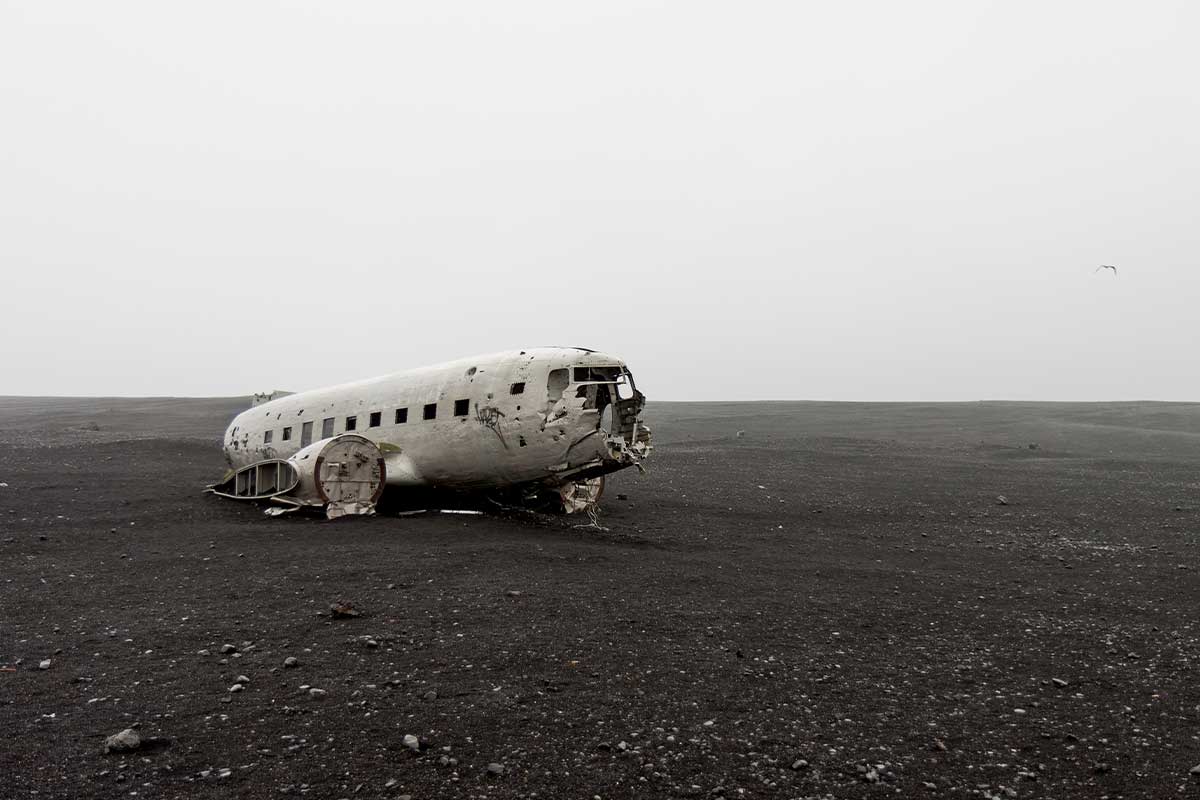 On the Snæfellsnes Peninsula north of Reykjavik is another beautiful black sand beach that’s worth a visit: Djúpalónssandur. This black sand beach in Iceland is backdropped by twisted cliffs of lava rock, and there are pieces of an old British trawler strewn across the sand after the ship was wrecked offshore in 1948. The scenery is beautiful, and the lava rocks are some of the most impressive in the country. 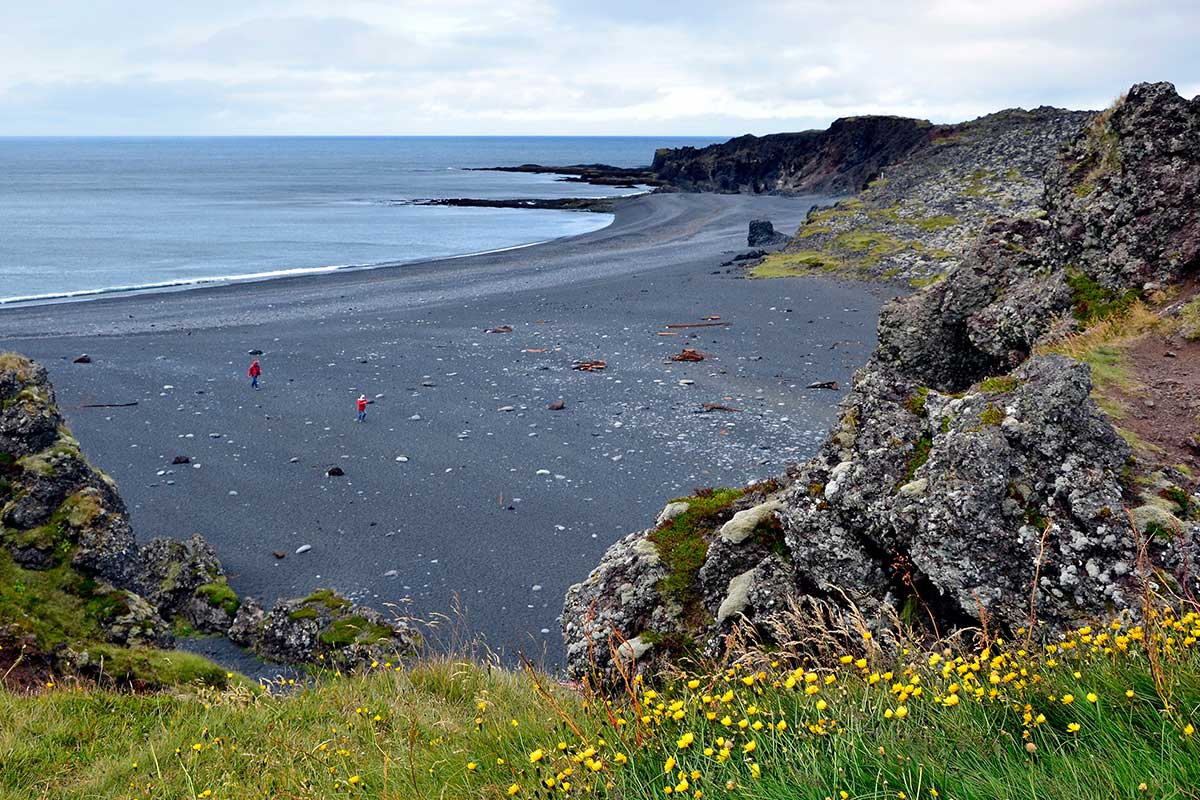 If you’re only in Iceland for a short trip with a campervan but still want to see a black sand beach, then the closest black sand beach to Reykjavik is Sandvík on the Reykjanes Peninsula. This quiet and out-of-the-way area is not visited by a lot of tourists, so it’s also a great option if you’re looking to have a black sand beach all to yourself. It takes only 45 minutes to drive there from our office in Hafnarfjörður.

Other Black Sand Beaches Around Iceland

We’ve covered off the most popular black sand beaches, but there are plenty more you can discover on your campervan trip through Iceland. Some other popular spots are the beaches around Djúpivogur and Breiðdalsvík in the East, the shore at Sauðárkrókur in North Iceland as well as nearby at Hvitserkur, or Ytri-Tunga on the Snæfellsnes Peninsula.

There are plenty of other black sand beaches in Iceland – you can check them out on the map below to start putting them on your campervan itinerary!

This windswept peninsula in Iceland’s northeast provides a remote and adventurous detour away from the crowds of tourists in the country. It’s a great alternative destination in Iceland for those looking to explore somewhere different in their campervan that not many others visit.

The 5 Best Places to Visit in the Icelandic Highlands

There are plenty of great places to visit in the highlands, but we’ve narrowed it down to the 5 best locations in the region.