Winter in Iceland is a wonderful time to visit the country, and there’s one natural experience that makes it extra special. During the chilly season, the ice caves in Iceland once again become accessible, letting visitors explore (with a guide, of course) the natural caves that appear underneath the country’s glaciers.

These tours into the ice caves are the most unforgettable experiences you can have in Iceland. The electric-blue ice is scarred with ash from ancient eruptions, reflecting the soft winter light, and casting a blue glow over the entire cave.

If visiting an ice cave in Iceland is on your bucket-list of things to do during your campervan trip, keep on reading to find out exactly what you need to know before heading out.

What Should I Expect on an Ice Cave Tour in Iceland?

For most ice cave tours in Iceland, you’ll start off with a drive in either a super jeep or a tour bus, depending on the group size. Along the way, usually your ice cave tour guide will explain how the tour will go, and what you can expect.

Depending on the cave you’re visiting, you might be able to drive right up close to the entrance. Other tours will require a bit of a hike across the glacier to reach. In either case, after arriving your guide will kit you out with any gear you’ll need. These include crampons, ice axes, and head torches.

After this, you’ll hike across the glacier to get to the cave. Following your guide is important, as they’re the ones who have explored the area and know the safest way. Patches of snow can hide crevasses in the ice, which can be very dangerous.

Inside the cave, the guide will also let you know of any safety precautions, such as never lingering in the entrance. Inside, you’ll be free to roam the cave, touch the walls, and take as many pictures as you want.

Can I Visit an Ice Cave on my Own?

In short, the answer to this question is no. By their nature, ice caves can be quite dangerous if you don’t know what you’re doing. Make sure to join a tour with a guide, who can also provide you with all the equipment you’ll need for the excursion (crampons, headlamps, etc.) 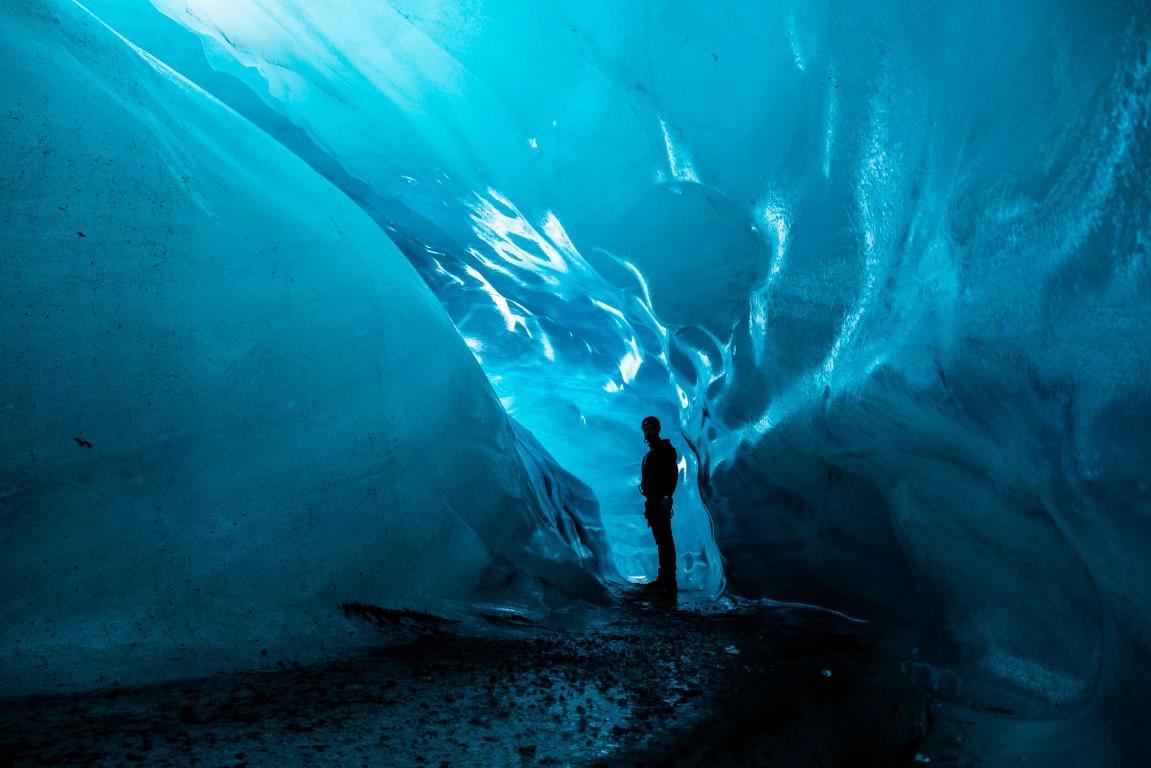 When is The Best Time to See the Icelandic Ice Caves?

The best time to see the Icelandic ice caves is during the winter. For the ice caves underneath Vatnajökull, it’s during this time when the cold stabilizes the caves enough for visits.

Can I Visit Icelandic Ice Caves in Summer?

Yes, you can visit some of the ice caves in summer. Well, you can visit one, which is the Katla ice cave underneath Mýrdalsjökull. This is one of the latest ice caves to be discovered in Iceland, and is easily accessible from Reykjavik. It takes half the amount of time to get here than it does to reach the glacier Vatnajökull.

This cave is known as the Katla ice cave because of its proximity to the Katla volcano, which also sits underneath Mýrdalsjökull. This is Iceland’s most dangerous volcano. However, the biggest part of the cave recently collapsed, meaning that there’s

Another cave was recently discovered in 2021 underneath Langjökull, which will also be accessible year-round

The Most Popular Ice Caves in Iceland

For many, the ice caves underneath Vatnajökull are the most ideal to visit. These are the ones you’ll see in photos, with pock-marked blue walls, swirls of black ash, and dramatic shards of basalt trapped in the ice. 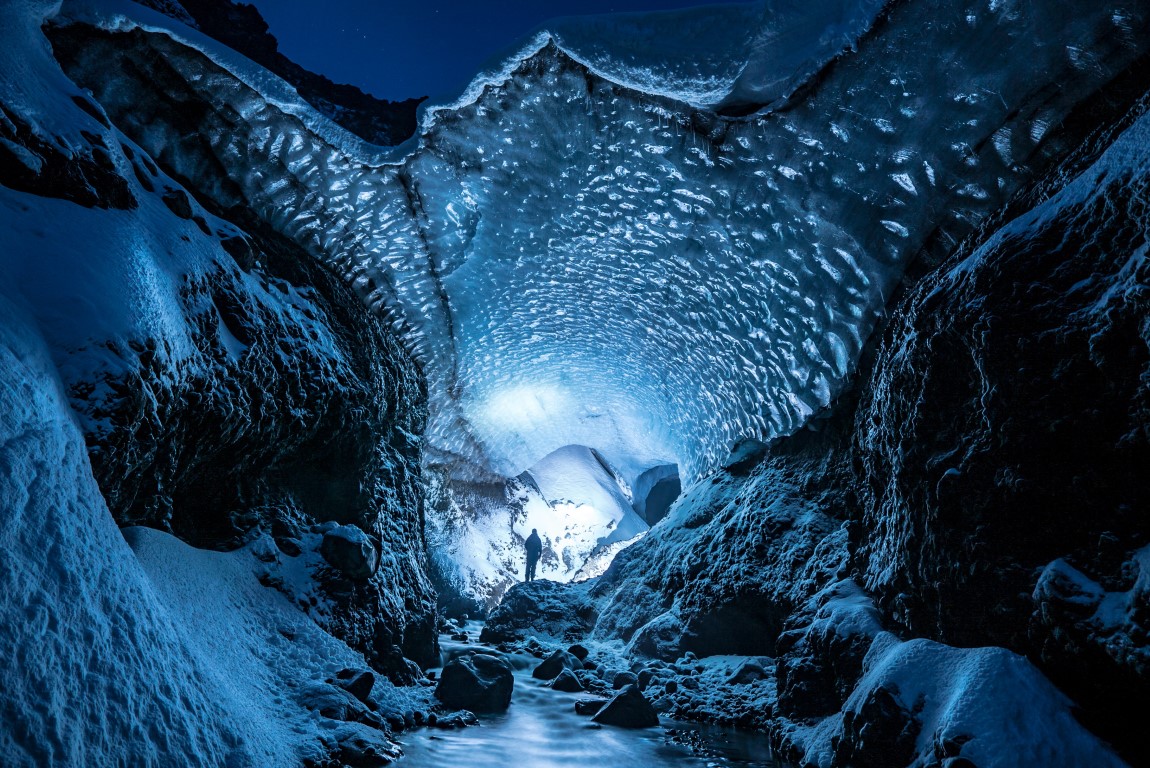 This is one of the most popular ice caves in Iceland. Ever since it wase discovered in the winter of 2011–2012, it has appeared every year in roughly the same area of Vatnajökull Glacier.

Each year a glacial river carves this cave out, leaving a large, electric-blue chamber over the winter. It’s spacious enough for multiple tour groups at one time and is located to the west of the Jökulsárlón Glacier Lagoon.

The Katla Ice Cave underneath Mýrdalsjökull Glacier is very different from the Crystal Ice Cave. The ice is darker, scarred with ash, while rushing glacial rivers are dark as if lifted straight out of Mordor. Grey snow melt rushes out of the ice, and there’s a brooding feeling thanks to the muddy, black landscapes.

A part of the cave recently collapsed, leaving a much smaller ice cave in its place. Something to be aware of if you’re joining a tour to the Katla Ice Cave.

The Langjökull Ice Cave – Into The Glacier

Another ice cave is underneath the Langjökull Glacier, known as the ‘Into the Glacier’ tour. This is a man-made cave where you’ll spend a lot of time learning about Iceland’s glaciers and its ice caves. Although very cool, it’s not a natural

Recently another natural ice cave has been discovered underneath Langjökull Glacier, which has been nicknamed the Amazing Ice Cave. This is one of the largest ice caves the guides have ever discovered, and there’s quite a bit of excitement about this new ice cave. Tours have already begun, and it’s looking like it will be open year-round as well. The meeting point for these tours are also very close to Reykjavik, near Gullfoss on the Golden Circle.

The Glacier Cave at Perlan in Reykjavik

If you’re here for a short trip and don’t have enough extra time to visit one of the ice caves, there is another man-made ice cave inside the Perlan Museum in Reykjavik. It also gives you a great look at what it’s like inside these caves under the glaciers, and the museum goes into detail about the glaciers and volcanoes in general.

What Should I Wear to Visit the Ice Caves?

This is probably the most important point to get right on your visit to the ice caves in Iceland. You don’t want to be distracted from the stunning natural ice formations thanks to cold toes or not having a waterproof jacket.

The most important pieces of clothing to remember are waterproof pants and a jacket. You’ll potentially be trekking across the glacier in rain, sleet, or snow, depending on the weather that day. It’s important that you stay dry.

After that, to stay warm you’ll want to layer up. Two thin layers is always warmer than one thick layer, as air gets trapped between the two layers and acts as insulation.

Beyond that, you’ll want to bring a warm hat, gloves, thick (woolen) socks, and potentially a scarf as well. For shoes, a good pair of hiking boots is required. And again, waterproof is key.

How Are Ice Caves Formed?

During the warmer summer months, water releases from the ice and pours through the glaciers. As this meltwater runs through the glacier, it carves out passageways within the glacier. At first, the water rushes down vertical gulleys, but it eventually reaches the base of the glacier and rushes out to its edge, carving out the caves. When winter hits, the water freezes again, leaving the ice caves frozen solid and safe to explore.

In Iceland, some ice caves are also formed by sub-glacial flows caused by the geothermal energy in the country. 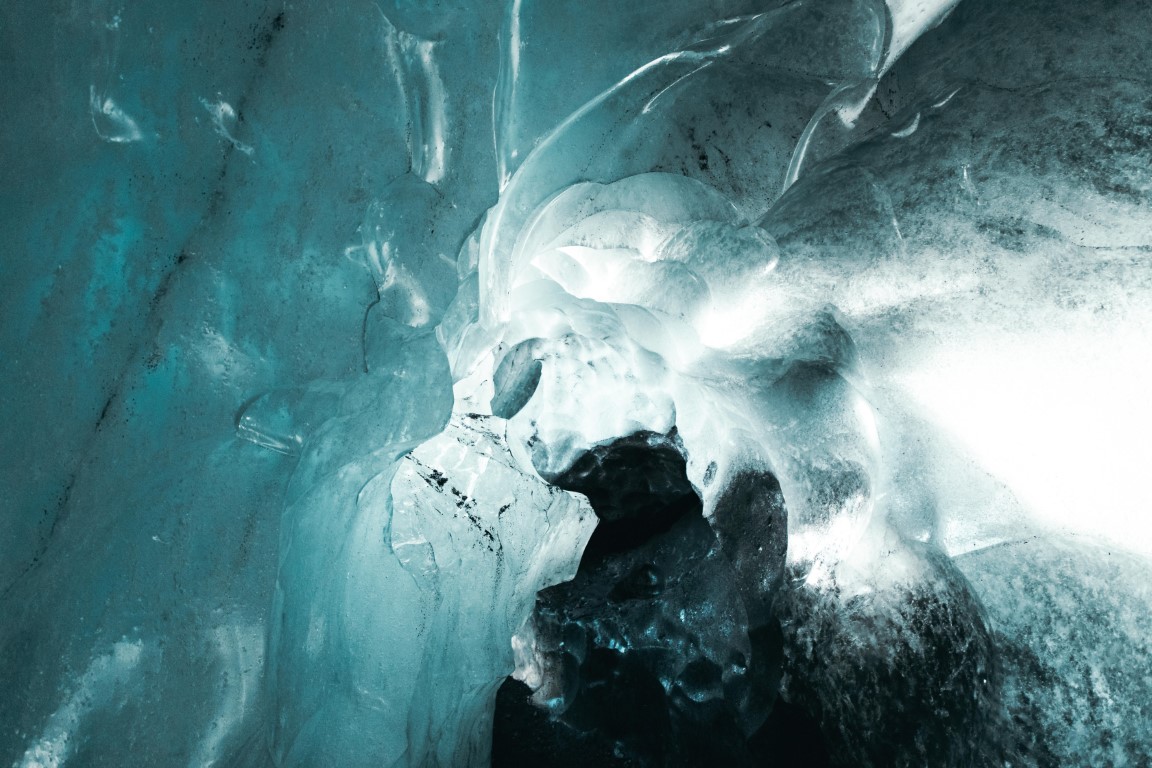 Iceland money: Everything You Need to Know

Notoriously expensive, more zeroes than you’re used to, an almost cashless society. So just how does money work in Iceland? And how expensive is Iceland, really?

Icelandic Horses: Everything You Need to Know

Icelandic Horses are one of the country's most famous attractions. Find out why everyone loves them so much inside.

This guide will explore the best things to see and do along Iceland’s south coast for campervans.