Drones in Iceland have taken off in a big way in recent years. Providing a top-down perspective of the incredible nature on show in the country, it’s no wonder – the photographs you can get are incredible. In this guide, we’ll go over everything you need to know if you’re planning to bring a drone to Iceland for some aerial shots.

From black lava fields covered in moss to crashing waterfalls, there are a lot of fantastic opportunities for photography lovers in Iceland. And that goes double for drone enthusiasts; from above, Iceland is like no other place on earth. Geothermal colours mix with sulphurous steam, mountains and canyons take on a whole other perspective, and the glacial rivers provide a wealth of opportunities for abstract photographs. It’s no wonder that Iceland has become a favorite destination with drone pilots over the last decade. 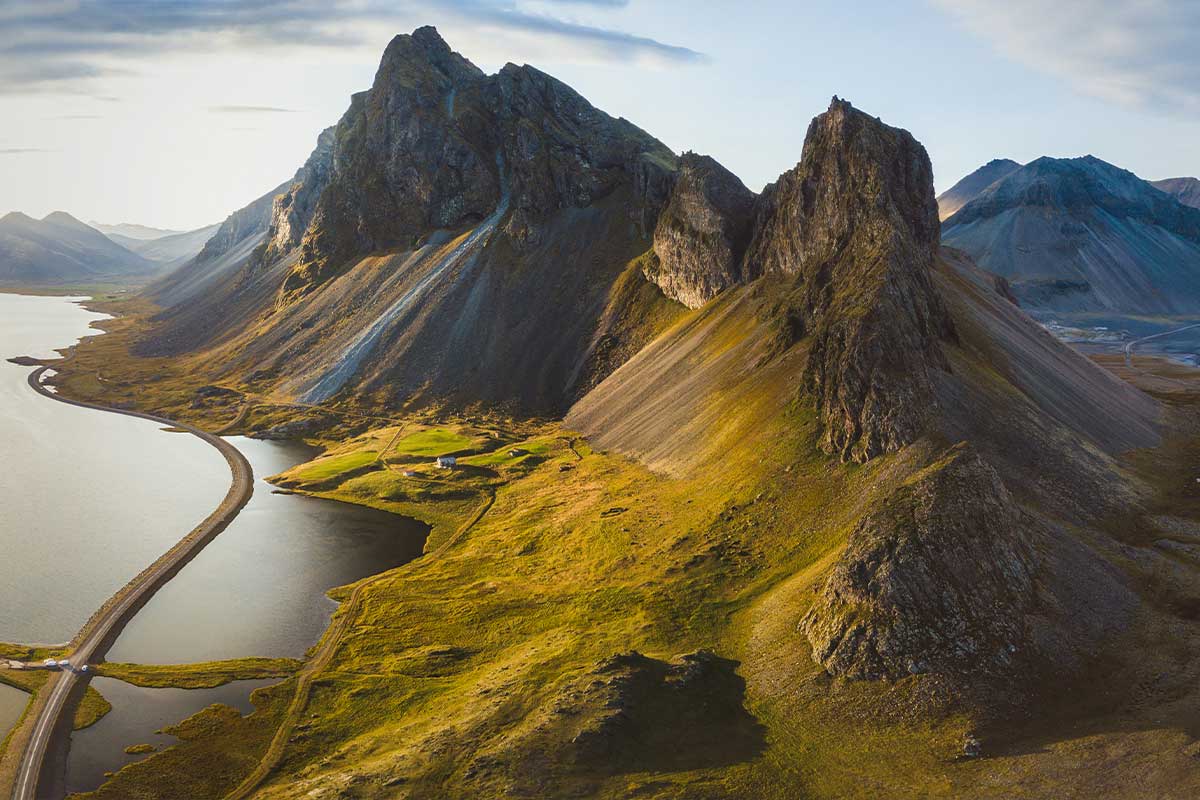 Can I Fly My Drone in Iceland?

Yes, you can fly your drone in Iceland, although you will need to follow a set of rules (more on that in a little bit). But in general, the wide-open spaces make for some excellent drone flying, with plenty of room so that you won’t bother other travellers.

However, it’s forbidden to fly your drone in some areas and in certain situations. To work out whether you can fly in a location or not, you’ll first need to look at the official rules for flying your drone in Iceland.

What Are the Rules for Flying a Drone in Iceland?

As with all new developments in technology, it does take a little while before the rules catch up. However, since drones have been around for a while now, the Icelandic Government has created a set of rules for drone pilots to follow while in the country.

The rules for flying a drone in Iceland are as follows:

You can find the full list of rules with all the legal jargon included at this link.

Places Where You’re Not Allowed to Fly a Drone

Now, onto the places where you’re not allowed to fly your drone in Iceland.

The first major areas that flying drones is illegal are the national parks. The reason is to protect the wildlife contained within the parks, visitor safety, and to maintain a quality experience for other visitors. Iceland’s national parks are Thingvellir National Park, Snæfellsnes National Park, and Vatnajökull National Park

However, the rangers in each park can grant permits to fly drones. You can find more information regarding flying drones in Iceland’s national parks at the following links:

It’s also prohibited to fly your drone in Iceland’s protected areas, nature reserves, and wilderness regions, including popular places such as:

Map of Protected Areas in Iceland 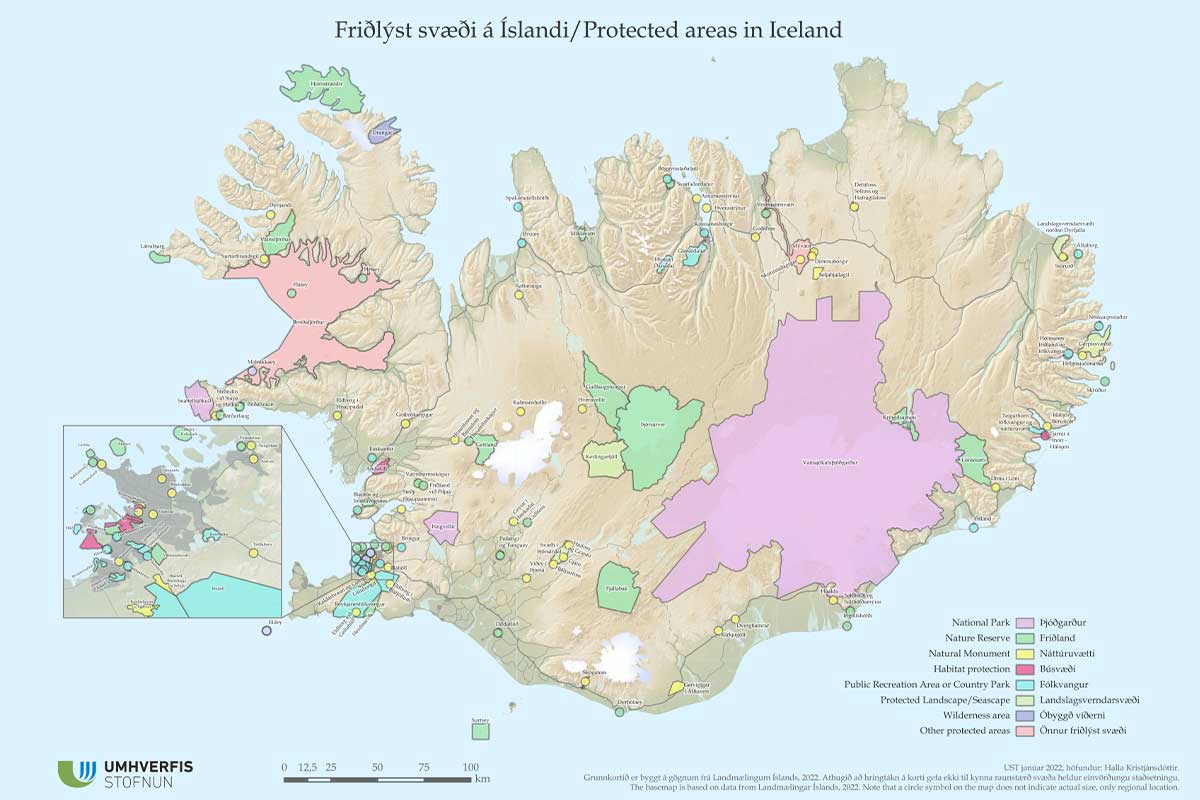 Do I Need to Register My Drone in Iceland?

Bringing Your Drone on the Airplane

So, you’ve gone over the rules and restrictions, have lined up some locations to fly, now what? Time to fly to Iceland with your drone. But this also poses a few questions – checked luggage or carry-on? Are drone batteries allowed in the cabin?

It’s recommended to take your drone with you as cabin baggage rather than checking it in. Drones are fragile machines, and you don’t want to arrive in Iceland to find that a heavy suitcase accidentally squished your drone.

The one essential question about taking your drone on a flight is regarding the battery. It’s important to check the regulations of the airline you’re flying with, but for most, you’ll need to keep the drone batteries separate from the body. Many airlines require you to do this in case of the batteries catch fire.

It’s also recommended to use a hard-shell case for your drone to avoid any damage.

The Best Places for Drone Photography in Iceland

The vast and empty Westfjords are Iceland’s least-visited region, and are perfect for flying your drone. Looking at the map above, you’ll be able to see the protected areas – note the large area on the southern coast where it’s not allowed to fly, as well as a few other sports like Látrabjarg cliffs and Dynjandi waterfall.

That leaves a whole lot of areas where you can safely fly your drone, and the scenery is spectacular. The vast fjords in this corner of Iceland are perfect for photography, and in summer, you might even be able to see whales swimming in the water.

For a great spot to take out your drone close to Reykjavik, the Reykjanes Peninsula is perfect. This volcanic area of the country is filled with spectral lava fields, jagged coastlines, and geothermal activity, making for some exciting and dramatic drone photography.

Apart from the large, protected area of Reykjanesfólkvangur, the peninsula offers plenty of coastline and volcanic landscapes to fly your drone. Just be sure to stay away from the international airport.

In the last Iceland volcano eruption 2022, many fans have flown their drones over the Geldingadalir volcano.

One of the best things about drone photography in Iceland is the incredible glacial rivers. From above, capturing these provides some of the most incredible – and abstract – drone photos. The south coast is filled with opportunities to shoot the glacial rivers with your drone. Head down to the coast from Selfoss to explore along the shoreline, where the large rivers drain into the ocean in spectacular fashion.

Further east, turning down dirt roads near to Kirkjubæjarklaustur also brings you to several areas where you can fly your drone over glacial rivers.

Studying the map above, you can see the vast expanse of country where there aren’t any protected areas on the northeast coast. This is one of the remotest areas in Iceland, with hardly any visitors – and the perfect spot for some drone photography.

There are black sand beaches, mountains rolling into the sea, and even an abandoned village on the Langanes Peninsula, the far northeast corner of Iceland.

Tips For Flying a Drone in Iceland

You’ve landed, picked up your camper, and are hitting the road. The idea of flying your drone above these gorgeous landscapes is starting to make your mouth water – but hold your horses there! First, let’s go over some flying tips so you can capture the best photos possible without losing your drone or breaking any rules.

You get it by now – Iceland has a lot of dramatic weather. From the near-constant winds to dust storms to blizzards, anything and everything can happen. Before flying a drone, it pays to check out the weather forecast, paying particular attention to the wind speeds. 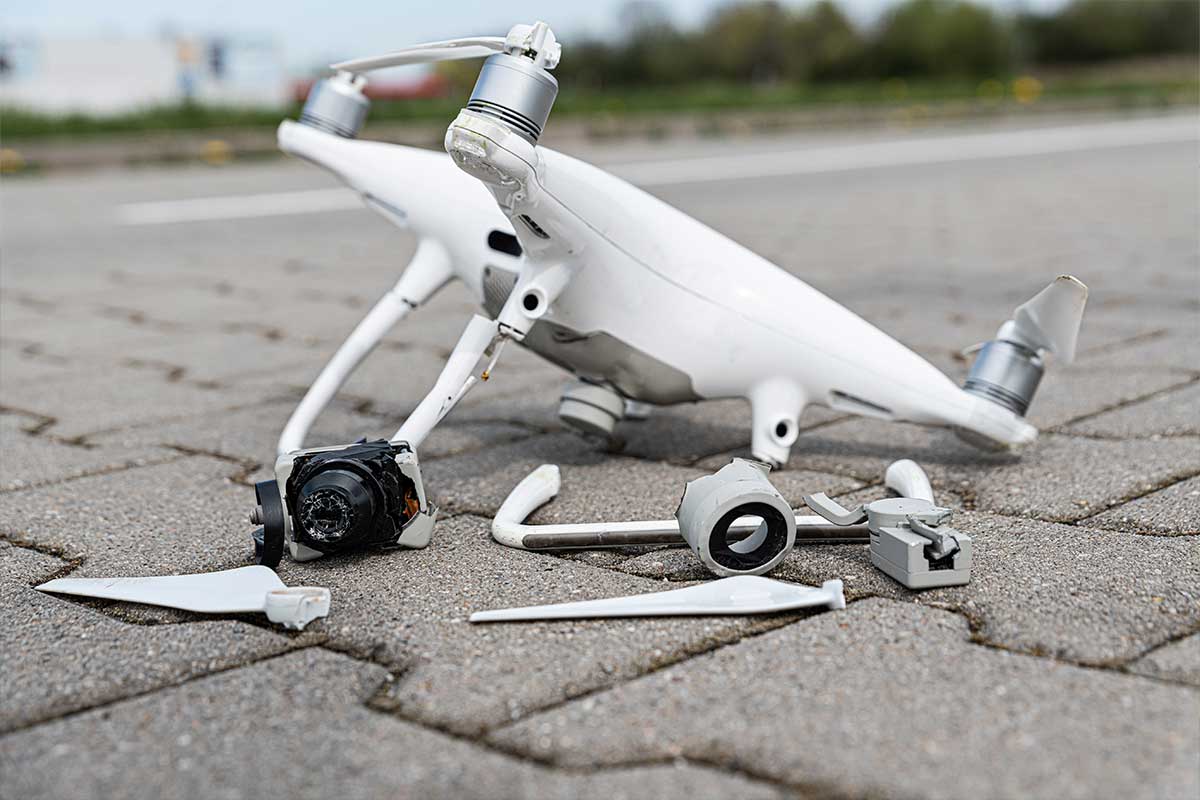 Pay Attention to your Surroundings

The weather is good, so what’s next? It’s a clever idea to pay attention to your surroundings – what might have looked like the perfect spot to fly on Google Maps might not be a great idea. Are there a lot of people about? Best not to fly. What about the wildlife? Are birds getting agitated by you simply standing nearby? Maybe find another spot where you’re not going to disturb them.

It’s important when flying a drone in Iceland to recognize that a lot of distinct factors come into play when finding the best spot to take off.

We didn’t go over all the rules above just so you can ignore them! Make sure to double-check them before flying, and make sure your drone connects to satellites which will also tell you if there are any airports or such nearby that make flying illegal. 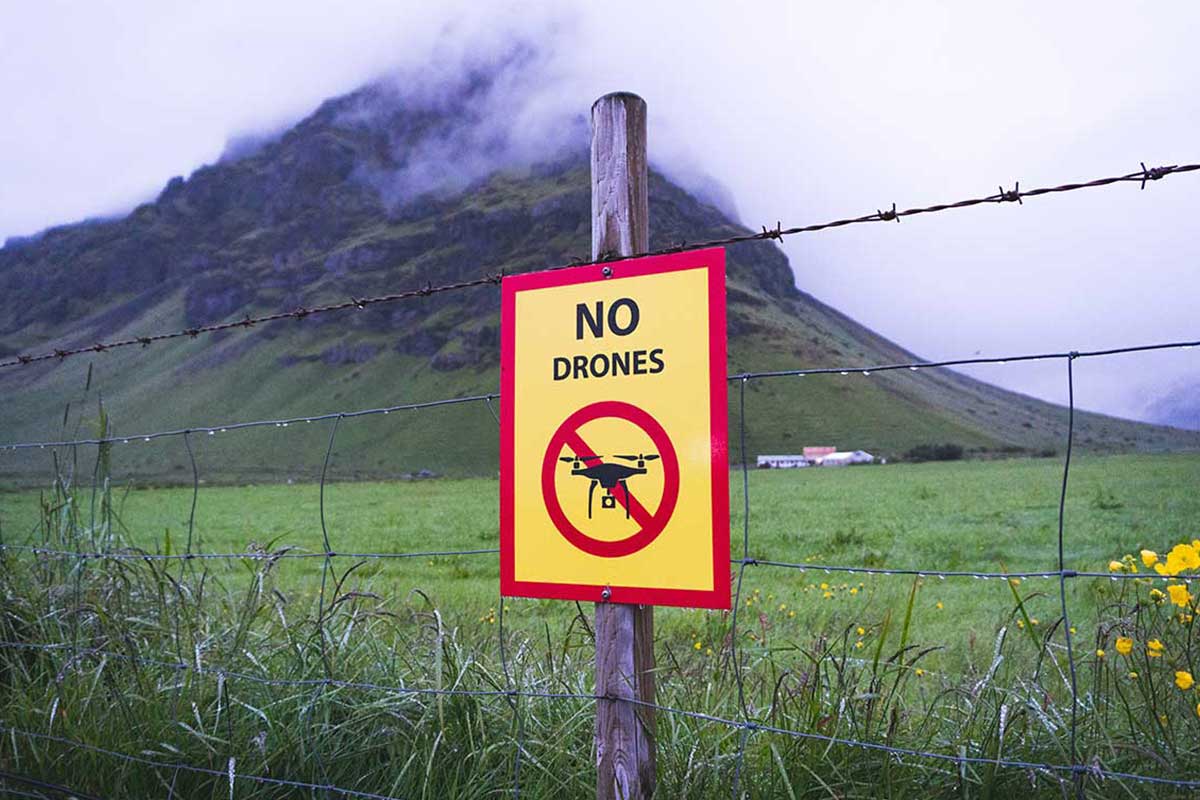 Iceland is so beautiful you’re sure to take a lot of photos while flying your drone. That’s why it’s a great idea to bring some spare batteries and storage capabilities. You’ll be kicking yourself if your SD card runs out of space when you’ve just discovered another fantastic spot to capture some aerial photos.

Backup Your Videos and Photos at the End of Each Day

Tying in with the whole topic surrounding storage, it’s a good idea to back up your photos and video footage each evening – or as regularly as you can afford to. That way if something happens to your drone on the next flight, you won’t lose out on a whole trip’s worth of photos.

Practice Flying Your Drone Before Arriving in Iceland

It goes without saying, that you will want to practice flying your drone before arriving in Iceland. It can be nerve-wracking flying a drone over a glacial river or into a mountainous valley, so having a bit of experience under your belt will go a long way to making sure your flights are incident-free.

Iceland money: Everything You Need to Know

Notoriously expensive, more zeroes than you’re used to, an almost cashless society. So just how does money work in Iceland? And how expensive is Iceland, really?

Hiking Fimmvörðuháls With a Campervan

Discover how you can hike the famous Fimmvörðuháls Pass in South Iceland if you've rented a campervan.

The Best Day Hikes in Iceland