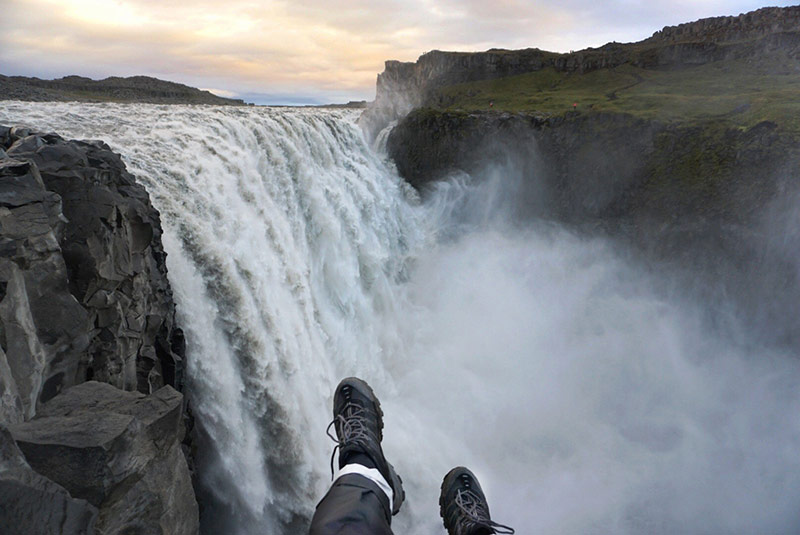 In a country where hundreds of waterfalls thunder out over cliffs and down mountains, we at Go Campers have compiled a list of the 15 most beautiful ones that you absolutely must see on a campervan trip around Iceland. 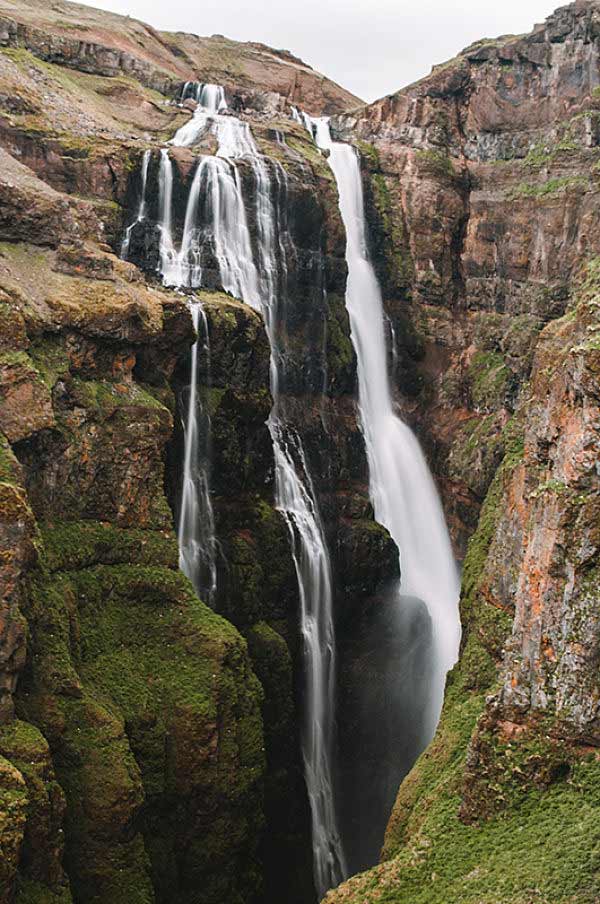 Glymur is in Hvalfjörður, only 1-hours’ drive north from Reykjavik. At 198 meters, it’s one of the tallest waterfalls in Iceland, and thanks to its location, one of the most stunning. To get to this waterfall, you need to hike up the side of a deep valley for about 2 hours. The hike itself is amazing, as you need to cross a river on a log, and the views back out towards Hvalfjörður on your way up to the falls are amazing. The canyon itself is covered in a beautiful green moss, and the sound of the churning water in the canyon floor below mixes with the cries of nesting birds on the cliffs.

Hraunfossar is one of the most beautiful waterfalls in Iceland, and one of the most overlooked. The name literally means Lava Waterfall, because the water flows out from underneath an expansive lava field. The colours of this waterfall alone make it unique in Iceland; flowing out from beneath a series of green bushes perched on the cliffside in multiple streams, it trickles down cliffs of grey and red into a rushing river of turquoise blue. 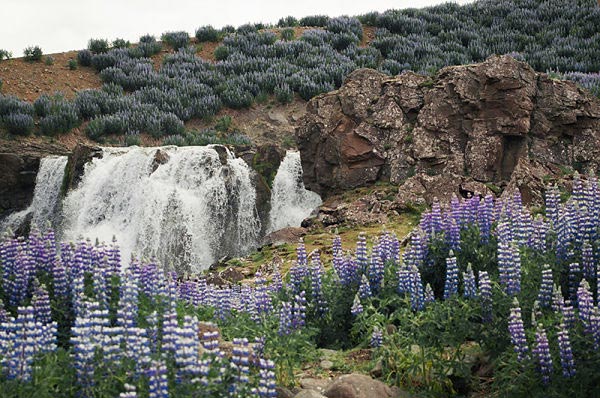 Sjavarfoss is another waterfall found near the bottom of Hvalfjörður and makes for a good pit stop if you’re on your way to Glymur you can find this small waterfall literally next to the road. This is a great spot to park your camper, relax and enjoy the nature. Not far from the parking lot you can visit a grassy area with a maze of rocks strewn about, and in June and July the surrounding fields are full of the beautiful lavender lupine plants, making the place even more magical. 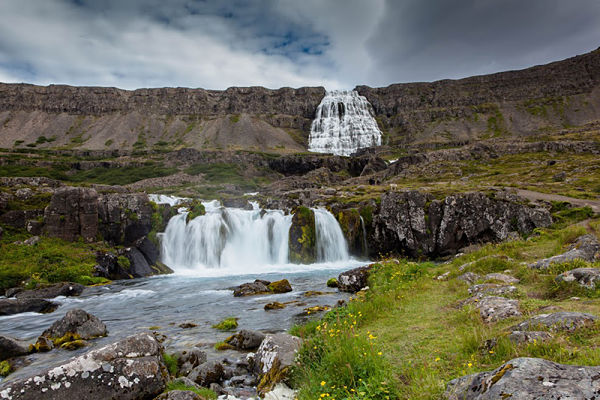 Dynjandi, also known as Fjallfoss, is the crowning jewel of the Westfjords region in Iceland. Crashing down over a series of tiered cliffs and getting wider at the bottom, it looks like a giant’s staircase. What makes this 100-metre-tall waterfall special is the fact that there’s hardly anyone ever here (the Westfjords region is Iceland’s least visited), and the fact that you can hike right up to the base of the roaring cascade. It’s easy to reach in summer time and the area has good facilities like toilets, a large parking lot where you can leave your camper and well-marked and maintained walkways up to the falls. 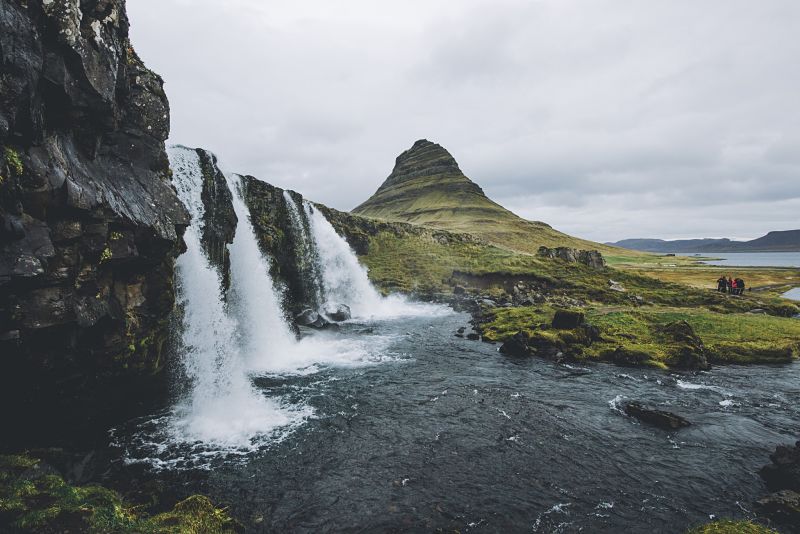 Kirkjufellsfoss is probably one of Iceland’s most photographed waterfalls, considering it’s in front of Iceland’s most photographed mountain; Kirkjufell. Translating to ‘Church mountain waterfall’, it’s obviously in a very photogenic location, and you can walk around the entire thing to get different views of it and the mountain beyond (not recommended in the winter time) Up from the waterfall you can find a very scenic bridge which was an old road back in the olden days as well. 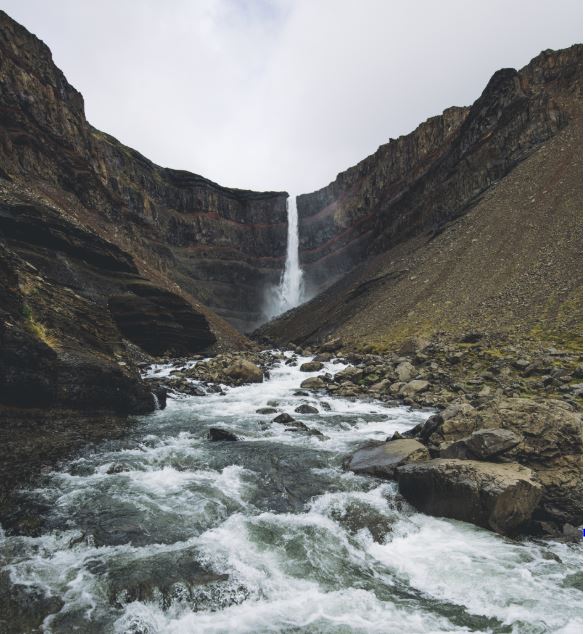 Hengifoss is East Iceland’s most famous waterfall, and an incredible one at that. With a height of 119 metres, this is the 3rd tallest waterfall in the entire country. It’s located a short drive easy from Egilsstaðir, alongside the Lagarfljót lake. The stream is not too strong, but what’s impressive here are the basalt walls and columns of red that make up the canyon. It takes about 45 minutes to hike up to the falls – not too difficult, but good shoes are recommended. On the way up you can also see the smaller waterfall Litlanesfoss. 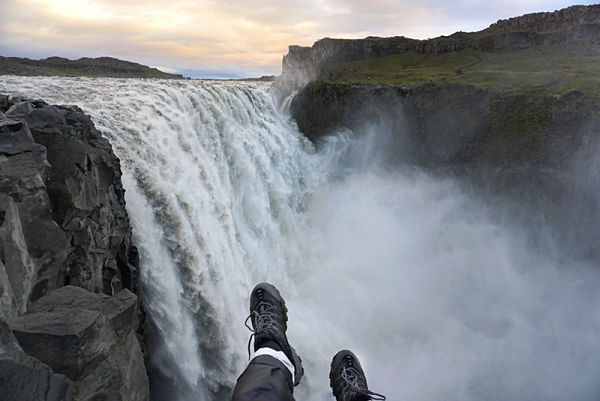 Dettifoss is famous for being the most powerful waterfall in all of Europe – 500 cubic metres of water plunges over the cliffs every second. It’s situated on Jökulsá á Fjöllum river in the northern part of Vatnajökull National Park. The stark and dramatic surroundings were chosen by Ridley Scott for the opening scenes of the film Prometheus. To reach Dettifoss we recommend taking road 862, a nicely paved road. 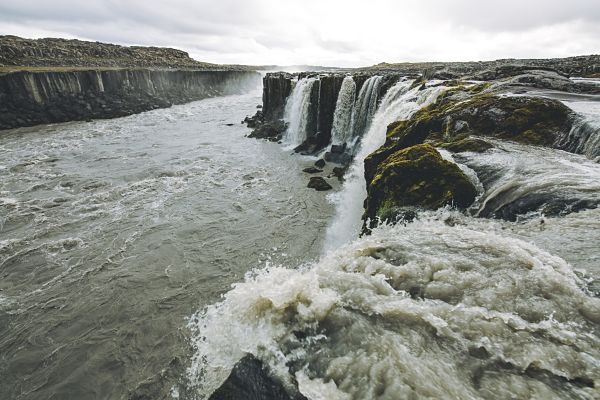 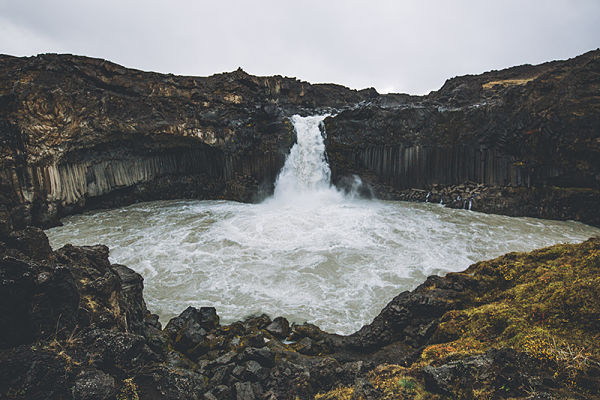 Aldeyjarfoss in North Iceland is an amazing and unique waterfall located just south off route 1. Surrounding by straight basalt columns thanks to past volcanic activity in the area, it’s an interesting sight that many travellers overlook. To get there, the road actually turns into an F-Road for 6km (4WD cars only), but the track really only gets rough if you go past the waterfall, so 2WD campers are OK. 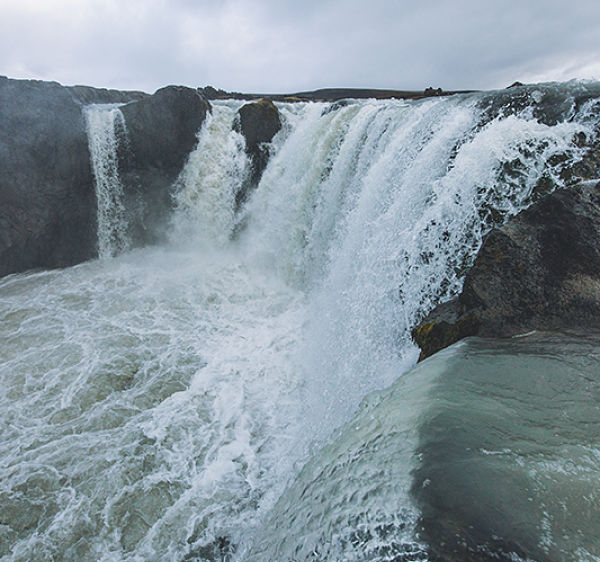 Goðafoss translates into “Waterfall of the Gods”, and even though it’s not one of Iceland’s biggest, it is one of the most mesmerising. Located in the north between Akureyri and Lake Myvatn, you’ll easily see it from the ring road. Legend has it that Þorgeir Ljósvetningagoði threw all of his statues of the Pagan Gods into the waterfall after attending an Alþingi in which it was decided that Iceland as a country would adopt Christianity as the official religion, hence the name Goðafoss. 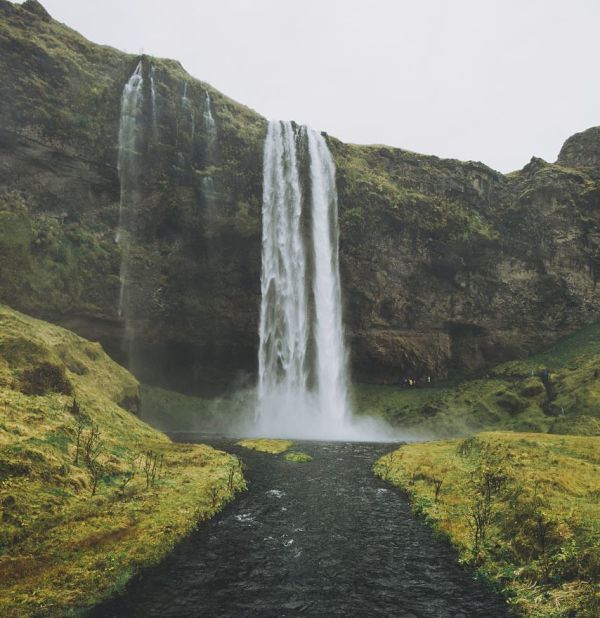 Seljalandsfoss is a waterfall located on the south coast of Iceland, around 1.5 hour driving from Reykjavik and on the road that leads to Þórsmörk. It is one of the most popular attractions of the south, thanks to it being the first waterfall many see and the fact that you can walk around behind it. Recently, a 700 kroner parking fee has been implemented, but there are good facilities available. 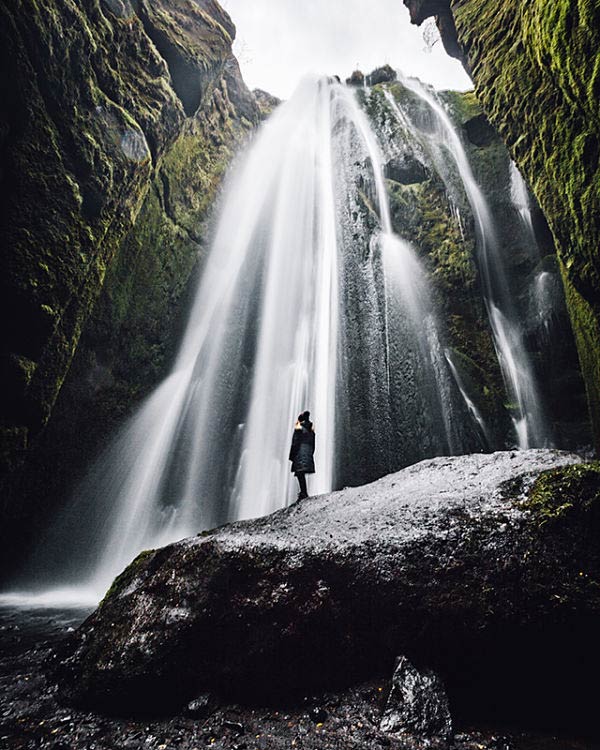 Gljúfrabúi is a smaller waterfall right next to Seljalandsfoss, but one that many people miss. Walk north along the cliffs from Seljalandsfoss to discover a canyon which you can walk into to. Inside is the waterfall, and you can walk right up to the base of the falls. Be very careful, as the ground and rocks are slippery even in the summer time. 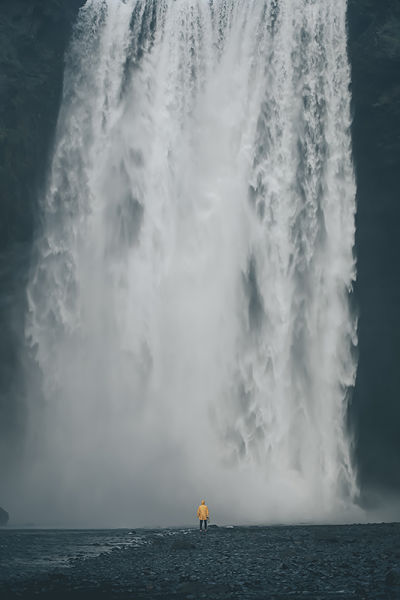 Skógafoss is the largest and most popular waterfall along the south coast. Situated on Skógar river, the waterfall spectacularly crashes down between mossy cliffs in a perfect sheet of water. There is a stair case that leads up the side of the waterfall, giving you a commanding view out over the entire landscape towards the ocean. This is also the starting or ending point for the famous Landmannalaugar 5-day trek, taking you up between the two glaciers into Thórsmörk and beyond to Landmannalaugar. The waterfall was a filming location for Marvel Studio’s Thor: The Dark World, as well as The Secret Life of Walter Mitty. The parking lot doubles as a campsite for campers, letting you wake up in the morning right next to the waterfall. 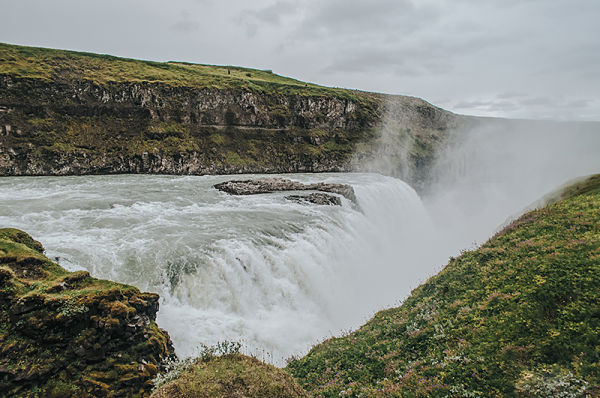 Gullfoss is perhaps Iceland’s most well-known waterfall, as the third stop along the wildly popular Golden Circle route. At just 1.5 hours from Reykjavik, it’s easily accessible and thus is also one of the most crowded waterfalls, but that doesn’t make it any less impressive. Cascading down over two sets of cliffs, the roar of the falls can be appreciated from numerous viewing points, and in the summer time you can get right up close to where the water starts to flow over the cliff. If you’re visiting in the Winter, pay attention as it’s very icy and slippery; the authorities have closed off viewing points for a reason. There are very good facilities available like cafes, a large parking lot, and toilets. 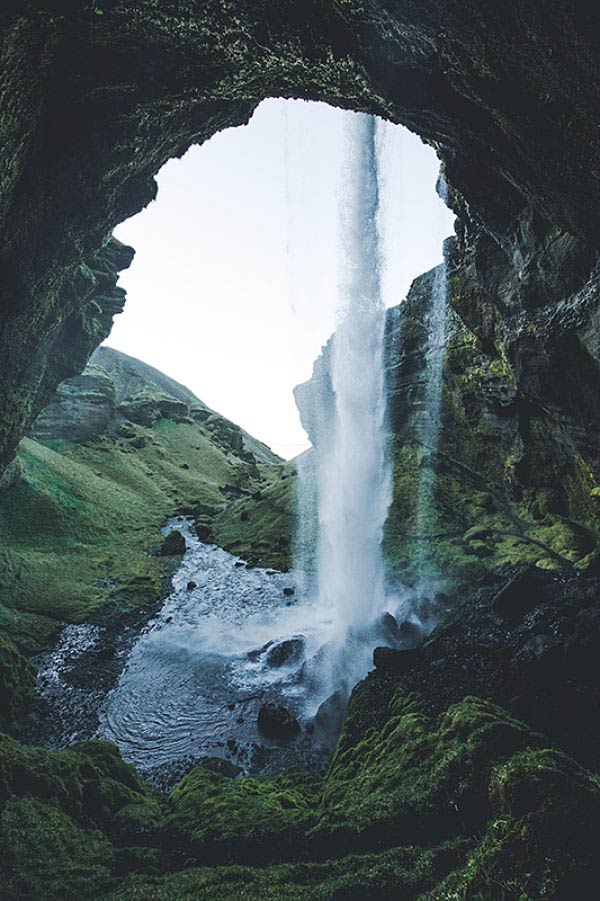 Kvernufoss is one of the south coast’s best kept secrets, thanks to its location near to the wildly popular Skogafoss. Hidden in a canyon just east of Skogafoss, to get here you have to park near to the museum, clamber over a fence to walk through a paddock into the canyon. A muddy trail leads you to the base of the canyon where this 30 meter high waterfall crashes loudly into the rocks below. You can also walk around behind this waterfall, and the views of the surrounding mossy canyon are exceptional. 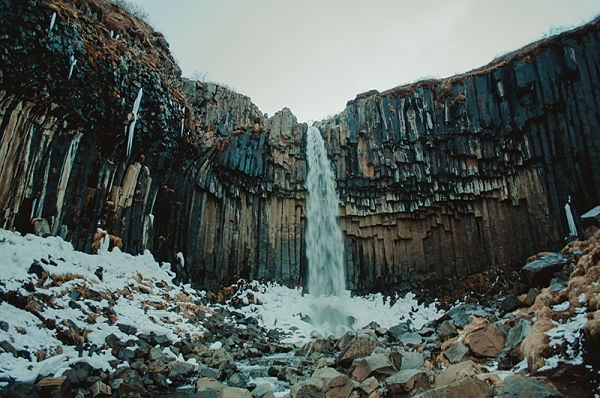 Svartifoss can be found in Skaftafell Nature Reserve, the southernmost part of the Vatnajökull National Park. Basalt columns of black around the waterfall make it one of Iceland’s most unique and beautiful. To get here, you must undertake a small hike beginning from the Skaftafell campsite, which takes about 40 minutes. Once there, you can get very close to this waterfall which makes it even more special. The surroundings are equally as brilliant, with the magnificent canyon, mossy cliffs and beautiful blue water of the river. This is one of our favourite waterfalls, and a definite must see when travelling in Iceland.