The Best Time to Travel to Iceland and rent a campervan 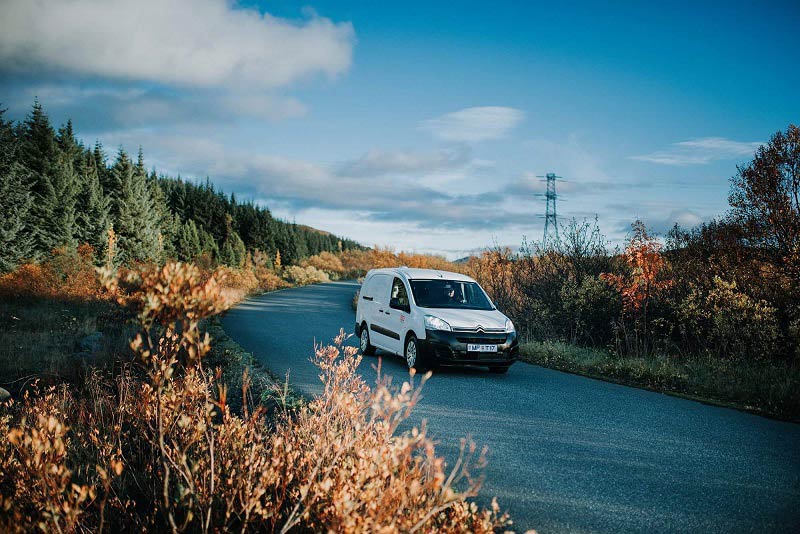 Many people might be wondering when the best time to travel to Iceland is. Weather plays a big part in Icelander‘s lives, and over a lifetime the population here has learnt to live with the extreme weather conditions that the small island experiences, so when planning a trip it‘s important to know what you‘re in for at any given time of year. Each of the four seasons have their own pros and cons, so in truth there is no ´best´ time to travel in Iceland. But read on to discover the Icelandic seasons and to decide which time is best for you.

From the end of August as the Summer fades in Autumn, a riot of colour explodes across the entire country, the landscapes transforming as they‘re enveloped in rusty hues of red, yellow and orange. The weather can be quite unpredictable at this time of year; the roads glisten under frequent showers, cleared away into sunshine by strong winds that can also whip up fierce storms. But don‘t let that put you off - the weather changes so rapidly in Iceland that you‘ll likely see a lot of good days as well.

The onset of Autumn also means that you can go picking wild berries in the countryside, and you‘ll be able to find blueberries and crowberries in many locations across Iceland. It‘s also the time when the Northern Lights make their spectacular return to the skies over Iceland, and it‘s one of the best opportunites to spot them as even though the winter nights are darker for longer, it‘s during September and October when the skies are at their clearest. The beautiful combination of autumn colours in the day mixed with rain and dark nights gives you a well rounded experience of Icelandic weather.

The dramatic snow-covered scenery in Iceland‘s winter time is like nowehere else – darkness sweeps across the country, the sun only hanging in the sky for 3-4 hours before dipping back beneath the horizon. And while many might be daunted by the Icelandic winter, there is absolutely nothing like checking out the behemoth glaciers of the south in their element, and exploring the ice caves beneath Vatnajokull is a once in a lifetime experience. The longer hours of darkness also means that there is a lot more time to see the northern lights, and while they‘re amazing in the autumn and spring, there‘s nothing quite like seeing them shimmer and dance over a tranquil snow-covered lava field or a waterfall encased in ice. Driving the camper through the magical snow-covered landscapes is an inspiring adventure in itself. And yes we do fit all our campers with studded winter tires during the winter season.

During the winter is when the weather is at it‘s most volatile; blizzards and fierce winds can overwhelm the country, hiding roads beneath snow and sheets of ice. But despite what many think, there isn‘t usually snow cover for the whole season. Rain can sweep in and melt away the snow, revealing a stark contrast of colours throughout the landscapes. Nature is right at the forefront during this time, and even the best of plans can get thrown out the window when the weather turns, so it‘s very important to stay flexible and have a backup. The good news is that it isn‘t all dark – Reykjavik during the Christmas period is a treat, and the locals enjoy the city underneath thousands of twinkling christmas lights, the cosy bars downtown spilling over with mulled wine and specialty Christmas beers. New Years Eve in Reykjavik is also amazing, the entire population getting their hands on some fireworks to let off all at once over the city when the clock strikes midnight.

For more tips and information about renting a camper in the winter, check out this article.

During the short Spring that Iceland experiences, the sun starts to linger for longer in the sky, warming the country and helping to melt the snow that covered Iceland in the winter. As the green slowly creeps back across the land and flowers begin to return, so too do the sea birds (including the puffins), flocking to the country in droves to nest on the cliffs along the coast line. Fields of lavender-coloured lupine burst across the fields, injecting colour back into the world and framing iceland‘s mountainous landscapes beautifully. Those snow-capped peaks help highlight and contrast the countryside as it approaches the summer.

However as always, the weather can be unpredictable, and there is always the possibility of snow even as late as May. Despite that, Spring is a great time to travel to Iceland; the longer days mean more daylight to explore, and when it does get dark there is still a good chance to see the northern lights until late April. Also during the spring months there is a great atmosphere about the country, with the whole population waking up after the long winter and getting excited for the oncoming summer and return of the sun.

·         Good for: 4x4 Highland Adventures, Puffins, The Laugavegur Trail, Festivals, the Midnight Sun, All campsites are open in Iceland

Summer time in Iceland is without a doubt the most popular time to visit the country. The long days means that there is endless time for exploring, and the golden light that falls across the country highlights incredible details in the mountains, glaciers and lava fields. The midnight sun can be seen around the Summer Solstice, which falls somewhere close to the 21st of June. The summer is also when the highland roads slowly open, allowing access to the wildly inhospitable interior of the country. It‘s here where you will truly find some of the most volatile and raw nature that Iceland has on offer, and renting a 4x4 camper to tackle some of the challenging F-Roads is a trip you will never forget.

Even though the country is more crowded during the summer, it never really gets dark meaning that you can reverse your clock and opt to visit the big attractions early in the morning or late at night, avoiding the crowds. But this is Iceland, so don‘t expect beautiful sunny days for your entire trip. Warm and sunny days can reach up to 25°C, but there are still days of rain and also intense winds. However, there are barely any road closures during this season and access to the entire country is readily available. Reykjavik also comes alive during these months, turning into a bustling cosmpolitan city that never sleeps, and you can find a number of great festivals and cultural events to attend during your time here.