The Icelandic Highlands are a desolate place. Dramatic landscapes are cut with icy glaciers, windswept arctic desert, vast lava fields and pockets of lush oasis. Completely uninhibited and only accessible in the summer with 4x4s, many consider it Iceland’s last frontier. Incessant winds blow across the plateau, and it can snow at any time; to travel here is to leave the crowds behind and adventure into one of the least hospitable areas in Europe.

This 9-day Iceland Highlands self-drive itinerary takes in the best of this wonderful area, designed for those with 4x4 campervans. You can make the itinerary shorter by cutting back on time in the north or excluding a trip to Askja. These roads are also only open in the very height of summer, usually between June and August. Check out the road openings on the Icelandic Road Association website, and make sure to read our detailed guide about driving on the F-roads.

After picking up your 4x4 campervan and stocking up on some essentials, it’s time to hit the road. The first stop on this Iceland Highlands self-drive itinerary is Landmannalaugar, which would take about 3.5 hours to get to without any stops. But the Thjórsárdalur Valley has a few great sights, giving you a taste of what’s to come. The first is Gjáin, a beautiful oasis of waterfalls, streams, and lush greenery. The second is the incredible waterfall Háifoss, the road to which is easily handled by a 4x4 camper.

F26 and F208 are the best roads to get to Landmannalaugar, and a good introduction into driving Icelandic mountain roads. From Thjórsárdalur, simply follow Route 32 to its end, when it turns into F26. Stop off at the Hrauneyjar Highland Centre, as this is the closest place to get petrol near Landmannalaugar. Afterwards, continue along F26 and then turn right onto F208, which approaches Landmannalaugar from the north.

The Landmannalaugar river crossing comes at the very end of F208, just before you reach the campsite. It’s a good spot to practice driving across rivers, as there are plenty of people around who you can watch. On the other side is the expansive campsite, the Landmannalaugar hot springs, and access to all the best trails in the area.

We highly recommend spending a whole day hiking the trails in Landmannalaugar. Made up of colorful rhyolite mountains, ancient volcanoes, and bubbling hot springs, it’s one of Iceland’s prettiest areas. It’s also one of the busiest spots in the Icelandic Highlands. 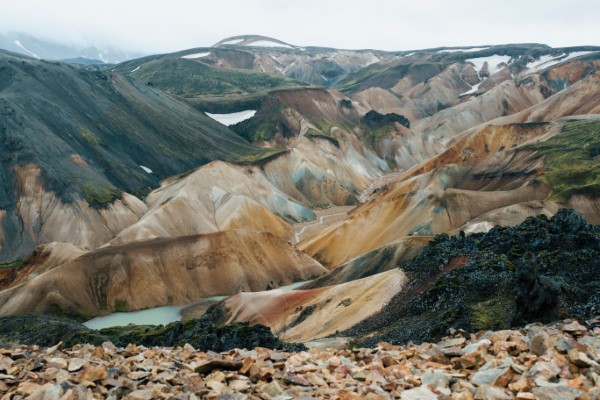 Leaving the crowds behind, the Sprengisandur Route (F26) is the longest F-road in Iceland, stretching for about 200km through the most desolate area of the entire country. This bleak desert of shifting black sands, huge boulders and distant mountains feel apocalyptic. Conspiracy theorists believe this is where the US government staged their moon-landing; Icelanders of old believed that the entire route was haunted by the supernatural. It’s not for the faint of heart.

Sprengisandur is mostly about the epic drive through the heart of the country. If you’re looking to break up the drive, roughly halfway at the base of Tungnafellsjökull is the highland outpost Nýidalur. Campers spend the night here to tackle the 10-hour return hike to Vonarskarð, the mountain pass between Tungnafellsjökull and Vatnajökull. Check in with the Nýidalur warden before any attempt.

Route F26 emerges out the back of the pretty waterfall Goðafoss. Make sure to fill up with petrol again here before making your way to your chosen campsite for the night. There are plenty of options around Mývatn and Húsavík.

It’s time to take a break from those teeth-rattling F-roads and enjoy the sights of North Iceland. There’s a lot to see and do, from whale-watching in Húsavík to exploring the volcanic oasis of Lake Mývatn. Whenever you’re ready to tackle the route to Askja, make sure to stay overnight at Reykjahlíð and fill up with petrol there in the morning. 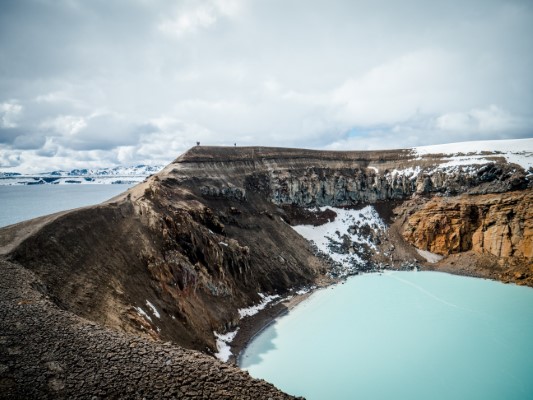 Mt. Askja is a volcano that rises out of Ódáðahraun, Iceland’s largest lava field, in the north-eastern highlands. This impressive caldera was created when, during an eruption, the volcano collapsed into the magma chamber beneath. The giant crater that formed filled with water, and is now Öskjuvatn, the deepest lake in Iceland. This massive body of water and its surrounding craters (one called Víti which is filled with hot blue water) are on a giant scale not seen elsewhere in Iceland; the raw volcanic power of the location is unforgettable.

For those who are short of time, this is a trip that you can cut from your own Iceland Highlands self-drive itinerary.

Set out early from Reykjahlíð, because it takes about 3–4 hours of careful driving to get to Askja. Turn south off Route 1 onto 901, and then take a right onto F905. You’ll eventually come across F910 – veer right and keep heading south. There are three river crossings to tackle here, so make sure it’s safe to cross before diving in. Both warmer weather and heavy rains can make these rivers flow swift and deep.

Follow F910 until you reach the Dreki mountain hut. There’s a ranger stationed here who can let you know the condition of the trail (F894) that continues to the parking area of Askja. Once there, hiking to the volcano takes about 45 minutes’ one way. Once you’ve had your fill of the magnificent scenery and had a dip in the crater’s hot spring, make the long journey back towards Lake Mývatn along the route you took in. We don’t recommend driving F88.

Optional loop: For those who are making good time and keen for more, instead of taking F905 north back to Route 1, follow F910 towards the east. You’ll be able to make a stop at Stuðlagil Canyon, a spot that’s growing in popularity.

Once you’re back in the North after Askja, it’s time for another break from the F-Roads. Luckily, there’s plenty to see and do on the way to the next F-Road on this self-drive itinerary, the famous Kjölur Route that traverses between the north and south between the two glaciers Hofsjökull and Langjökull. Akureyri is the biggest slice of civilization in the country outside of Reykjavík, and well worth a visit. If you’re not in a rush, it’s also nice to loop around the Tröllaskagi Peninsula, now a part of the Arctic Coast Way. When you’re ready to continue the Iceland Highland self-drive itinerary, spend the night at Varmahlíð campsite so you can fill up with petrol before tackling the Kjölur Route. 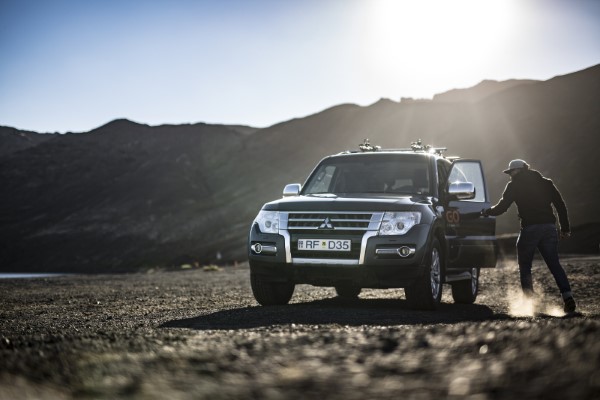 Kjölur, or F35, is Iceland’s most accessible highland road. This historic trail through the Iceland Highlands has been in use since settlement, formerly the quickest route for northerners travelling to and from the Althing in Thingvellir. From the top of the pass, you’ll be treated to grand views of the glaciers, great expanses of volcanic deserts, and awesome valleys, lakes, and glacial rivers; the Iceland Highlands at its best. This is also the easiest highland road in the country, as there are no longer any river crossings. However, it remains an F-road; regular vehicles aren’t allowed.

Splitting up the whole route into a couple of days is extremely rewarding. It takes about 2 hours of driving from Varmahlíð to reach the area called Hveravellir, the perfect spot to spend a night. This highland oasis is a bubbling and active geothermal area that extends west into the foothills of the Langjökull glacier. Cracked earth, steaming fissures, and boiling hot springs all make for some great scenery on the many hikes in the area. During the summer, a small restaurant operates that serves up warm meals in the evening.

A short drive from Hveravellir is the mountainous area of Kerlingarfjöll, one of the least visited areas in the Highlands. With orange-hued peaks covered with the remnants of glaciers and valleys filled with steaming hot springs, it’s another great spot for hiking. There are a variety of trails of varying difficulty, all revealing wonderful views of the area.

To get there, keep heading south along with F35, and then turn off onto F347. There are a few river crossings to make along this route before arriving at the main base of operations, Kerlingarfjöll Mountain Resort. This sprawling complex is made up of a variety of accommodation options, but campervans are welcome at the campsite. There’s a restaurant on-site that serves breakfast, lunch, and dinner.

Once you’ve had your fill of hiking in Kerlingarfjöll, head back to F35, which emerges at the top of the Golden Circle. The nearest petrol station is just down the road at Geysir, a good spot to fill up for your return to Reykjavík or any further adventures. This is the end of this Iceland Highlands self-drive itinerary, but not the end to the F-roads. There are plenty more mountainous adventures to be had in the Iceland Highlands; you can’t see it all in just one trip. 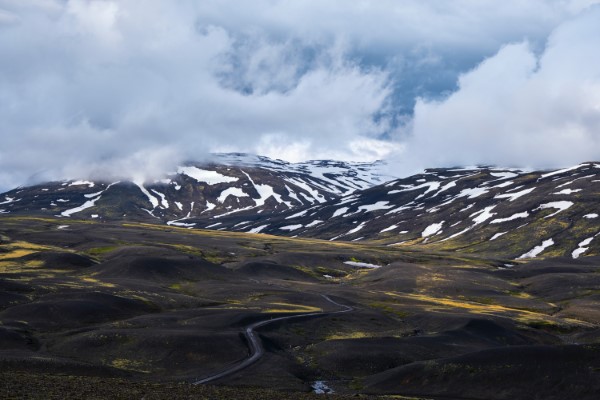 Not everyone has a whole lot of time to spare on vacation. If you want to do Iceland’s ring road in 5 days without missing the highlights, this itinerary is for you. Includes Thingvellir National Park and Gullfoss waterfall.