On March 19, 2021, after weeks of rumbling earthquakes around southwest Iceland, the Geldingadalir eruption began. This marked the first eruption on the Reykjanes Peninsula in 800 years, and a once-in-a-lifetime opportunity for visitors to see a real-life lava flow changing the face of the country.

Iceland is, after all, the land of fire and ice; and it’s finally living up to its name again with this new attraction. It started slowly, with lava seeping out of a fissure in the earth, spreading out through the surrounding valleys Geldingadalir and Meradalir. Since it’s a relatively small eruption, with the lava moving slowly, nature-lovers in Iceland made the trek out to the volcano to watch it in action.

Since then, the eruption has changed several times. More fissures have opened, and the lava field is continuing to grow as the flow increases. The latest change has meant that one of the fissures is spewing forth lava over 300 meters into the air, like a sort of fire geysir.

As a once-in-a-lifetime chance at seeing a volcano in action, campers this summer will want to mark this down on their itineraries. Below, we’ve rounded up everything you need to know about visiting the new volcano in Iceland.

Where is the Volcanic Eruption in Iceland?

The volcano is currently erupting in the Reykjanes Peninsula, southwest Iceland. This is the area where the Keflavik International Airport is located, as well as several of the larger towns in the country.

Although it’s in the region of the airport, the volcano is in quite a remote area of the Reykjanes Peninsula, about halfway between the town Grindavík on the coast and the volcanic lake Kleifarvatn.

Although it’s close to the volcanic mountain Fagradalsfjall, the eruption is coming out of fissures in the earth just to the south of this, in the valley called Geldingadalir.

The best part about the eruption’s location is just how accessible it is from Reykjavik. It’s estimated that now over a quarter of the Icelandic population have visited the volcano, taking their opportunity to see an event that’s usually reserved for the volcanoes in the remote Highlands region. 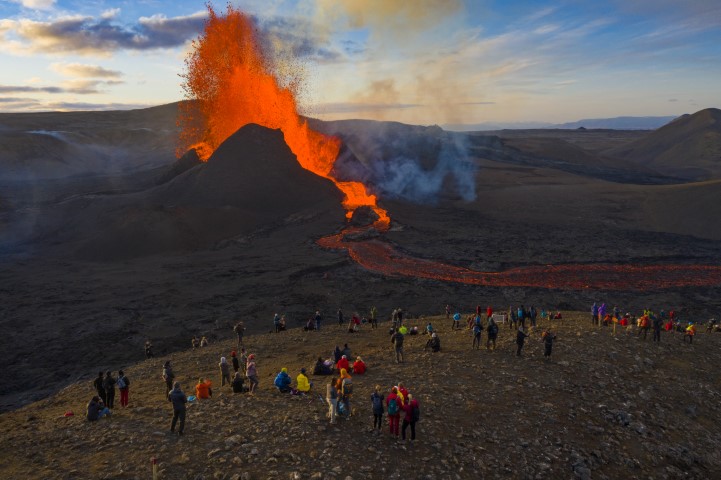 Can You See the Volcano from Reykjavik?

At first, the volcanic eruption in Iceland could be seen from Reykjavik only as an orange glow behind the mountains.

However, since May, the eruption has turned into a sort of geysir, spurting lava 300 metres into the air. Now, it has become much more visible from the Icelandic capital.

The eruption is continuing to change and evolve, every week bringing something new to marvel at. Nobody is quite sure people could see the actual eruption all the way from Reykjavik.

How Long Will the Eruption in Iceland Last?

Due to the constancy of the lava flow and the first analyses of the magma, scientists studying the volcano have come out and said that the eruption could continue for a long time. However, it’s hard to say just how long.

Due to the remote location, an extended eruption doesn’t pose any threat to towns on the Reykjanes Peninsula.

How Do I Get to the Iceland Volcano?

Please note that as of May you now have to pay for parking at the volcano trailhead. The cost is 1,000 ISK, and payment is done online. Proceeds go toward improving the infrastructure in the area for visitors.

Getting to the volcano requires a long hike through rough terrain on the Reykjanes Peninsula. The Icelandic Search and Rescue Team (ICE-SAR) have recently improved the path dramatically, cutting the walking time down.

Thanks to the predictability of the lava flow, the Geldingadalir eruption is very visitor-friendly. A growing number of tour companies are making the most of the eruption, offering guided hikes out to the location with transport to and from your accommodation. However, if you’ve rented one of our campers you can simply drive to the trail.

The hike begins from road 427, about 10-minutes east of Grindavík. However, the parking area is not located directly next to the trailhead – once you’ve parked your car, you’ll have a short walk before you reach the beginning of the hike itself.

How long is the hike to the Geldingadalir Volcano?

The trail is quite challenging, leading over uneven ground, lava fields, and steep hills you must climb (with a rope to hang on to).

There are two different paths you can take. The easier of the two is the lower trail (Trail A), which is about 4km each way. Experienced hikers should be able to make the return trip in around 2–3 hours. For those who aren’t used to such rough terrain, the return trip is usually between 4–6 hours. The upper trail (Trail B) is just a bit longer.

You can download a free copy of the hiking trail to your mobile here.

For a photo version, follow this link. Also please be aware that the trails can change at a moment’s notice, so please check Safe Travel before embarking on your hike.

The volcano is in a remote location on the Reykjanes Peninsula. The landscapes here is incredible, often compared to as a moonscape. From crater rows to lava stacks, it’s a challenging, desolate, area – hikers must come prepared.

Since it’s a long hike to the volcano, and a once-in-a-lifetime opportunity as well, you’ll likely be spending an entire day out there. As such, you’ll need a few other essentials in your backpack. 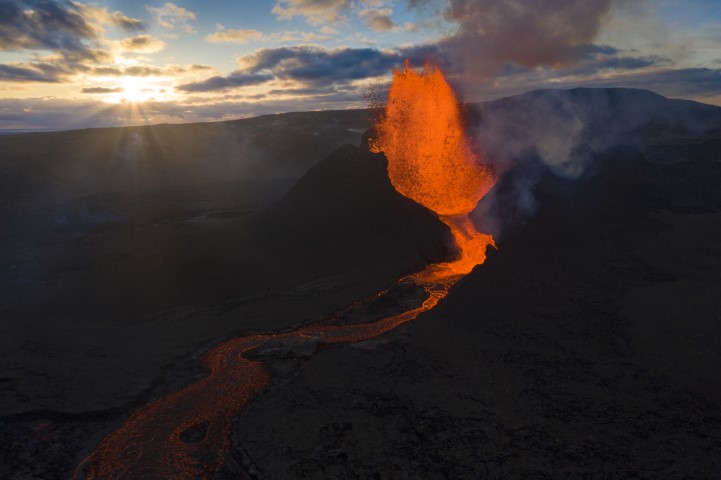 Safety at the Volcano

It’s important to stay safe at the volcano. Gas pollution is the biggest problem – currently, the ICE-SAR team are on-site from midday until midnight, measuring the levels for safety.

If the volcano site has too much gas at any time, it will be closed to visitors with alerts sent out through the media and Safe Travel.

Some important safety tips and guidance from the professionals:

Unlike those pesky northern lights, photographing the volcano is quite easy – any old camera phone should produce some stunning shots for you to take home with you.

Professional photographers will want to take a drone to the eruption site, which will produce the most spectacular shots. However, there are some rules to follow if you’re going to do this.

But follow these rules and you’ll return with some spectacular shots of the volcano and lava flow.

The land of fire and ice is one of the most volcanically active countries on earth. Read on to discover the best volcanic experiences you can have in Iceland.