If you’re looking at travelling to Iceland and renting a campervan for 7 days, we’ve done all the hard work for you and plotted out the ideal itinerary for you that takes in all the main sights around the ring road. But first, a bit of information about the ring road.

The ring road is Iceland’s longest road, circling the entire country and taking you through most of the awesome landscapes found here. It circles the outside of the country as this is where you’ll find majority of the towns and population. You can generally say that it skirts the inhospitable highlands, the desert-like plateau in the centre of the country dominated by volcanoes, expansive lava fields and epic glaciers.

The total length of the road is 1,332 kilometres (828 miles) long. For most of it, it’s a paved, two-lane road, but you’ll come across a fair share of bridges that are single-lane only. Speed limit is 90km/h. We suggest driving it anti-clockwise and heading to the south first, as it’s a lot busier down there and we think it’s a good idea to get the crowds out of the way first. You might also let the weather forcast decide.

Can You Drive the Ring Road During Winter?

While it can be possible to drive around the ring road with a campervan during the winter time, we recommend that you are well prepaired. Read our in-depth guide - Winter Camper rental: The Essentials

After picking up your Go Camper in the morning from our office in Hafnarfjörður and stocking up on supplies from one of the nearby supermarkets, it’s time to hit the road! First day itinerary will take you through the Golden Circle and then out towards the popular south coast, which is packed with amazing sights.

The Golden Circle is one of Iceland’s most popular tourist routes; day tours leave from Reykjavik at many hours, so expect it to be busy. Thingvellir National Park is the first stop, the site of two tectonic plates slowly tearing apart. It’s also here where you can go diving between the plates at Silfra if you’ve booked ahead. Next up is Geysir, the water erupting in a plume every 4-5 minutes. Final stop on the Golden Circle is the thundering waterfall Gullfoss, one of Iceland’s largest and most impressive waterfalls.

Read our in-depth guide to the Golden Circle here.

Next up is the South Coast. First stop is Seljalandsfoss waterfall, which is about an hour and a half away from Gullfoss. Parking here costs 700kr, but there are toilets on site and another waterfall just north of Seljalandsfoss called Gljúfrabúi, making the cost worth it. After that is the waterfall Skogafoss, another 20 minutes along the road. Just before Vik is where you’ll find Reynisfjara, the famous black sand beach used as a shooting location for Game of Thrones.

Finally, you can finish the long day of driving in Vik, a pretty coastal hamlet and Iceland’s southernmost point.

Depending on how you go for time, or if you’ve got a few extra days, there are a few other sights around this area that you could you might want to check out. Seljavallalaug is Iceland’s oldest outdoor swimming pool, situated between Seljalandsfoss and Skogafoss on road 242. It’s not the warmest water, but the surroundings are well worth the 30-minute trek it takes to get there. Another popular attraction is the Solheimasandur plane wreck on the black sand beach. To get here, look out for the parking area on the right-hand side of the road shortly after you leave Skogafoss. You will have to park your camper there and it takes about 40-minutes to walk out to the plane. Finally, the Dyrhólaey Peninsula gives you a magnificent view out over the entire area, and there are puffins there to boot.

Waking up at the campsite in Vik, it’s time to get another early start. Driving towards the East will take you past changing and diverse landscapes as the enormous Vatnajökull gets closer, dominating the south-east region of the country. Make sure to stop off at the impressive Fjaðrárgljúfur Canyon just before the town of Kirkjubæjarklaustur, a winding canyon created an age ago by a powerful glacial flood.

Make your way into Skaftafell National Park, a great place for hiking and taking in views of the massive Vatnajökull. There are several different trails that you can tackle of all difficulties, but make sure to talk to the park rangers inside the information centre first to get an idea of the conditions. Generally, you can expect the most popular trail that leads to the impressive waterfall Svartifoss to be open.

Next up is one of the biggest attractions in Iceland; the Jökulsárlón Glacier Lagoon. It’s easy to spend a couple of hours here, wandering the shores of the lagoon and marvelling at the large chunks of glaciers floating out to sea. Make sure to head to the coast where you’ll find Diamond Beach, washed up glaciers resting on the black sand. This is also a meeting point for many tours onto the glacier; hiking, snowmobiling, and ice cave tours from many different companies all leave from here. Afterwards, make the short drive from the lagoon into the town of Höfn, known around Iceland for it’s langoustine.

Day 3 will take us up the eastern coast of the country, but the first stop should be Vestrahorn mountain just outside of Höfn. This mountain can be seen from the ring road, but you’ll get a far better perspective of the interesting form if you head down the road Stokksnes.

After that, it’s a lazy day of driving through the eastern fjords. There are attractions, museums, and small restaurants to be found in any of the villages along the way, so make sure to stop often and admire the way of life in this quiet part of the country. Egilsstaðir is the capital of the eastern region, serving as a great place to stock up on more supplies, but it’s over the high mountain pass to Seyðisfjörður for the evening campsite. Those who have seen The Secret Life of Walter Mitty might recognize the road leading down towards the village; it’s the same road that Ben Stiller skateboarded down in the film.

The town is an artist’s hub, so you can expect to find lots of arts and crafts stores selling unique souvenirs. The rainbow-colored pavement leading towards the pretty church in town is also worth making the trip out here.

While it’s a relatively short distance between the East and Lake Myvatn, day 4 is stretched out once more with a lengthy detour off the ring road to visit Dettifoss, Europe’s most powerful waterfall.

Study any map and you’ll see that there are two different roads that lead to Dettifoss; 862 and 864. Both lead towards different views of the waterfall, both with pros and cons. 864 is on the eastern side of the canyon, so naturally you’ll come across this first. Beware: the road is a rough gravel track and can lead to some flat tires so we do not recommend this one. Road 862 was recently paved though, so makes for a much smoother drive on your campervan.

After taking in your fill at Dettifoss, head back down towards the ring road to continue towards Lake Myvatn. This is one of the most beautiful areas of Iceland and filled with different and interesting sights, including a couple of Game of Throne shooting locations. Before you reach it though, you’ll come across Hverir, a mars-like geothermal wasteland, and the popular Myvatn Nature Baths hot spring – we strongly suggest some recovery time spent in the warm waters here overlooking the volcanic landscape. Find campervan friendly campsite in the nearby town of Reykjahlíð, at the edge of the lake. 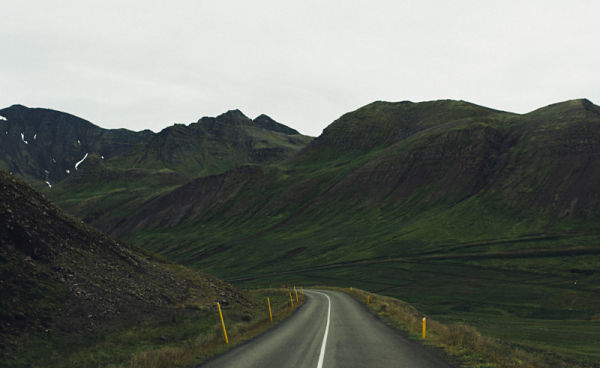 Wake up early to spend the morning touring around Lake Myvatn, heading down along the eastern side and then back up the western shore again. Then, make the 50-minute drive from Myvatn to the northern fishing village of Húsavík, Iceland’s whale-watching capital. The combination of shallow coastal waters combined with long days of sunlight makes Iceland a hotspot for all kinds of whales, and tours boast a very high success rate for sightings.

After whale-watching, it’s time to head into Akureyri to explore Iceland’s second largest city and get a taste of civilization after so long in the countryside. Stop off at Goðafoss along the way before entering Eyjafjörður, Iceland’s longest fjord, where Akureyri is nestled on the western coast. There’s plenty to see and do in the city, so leave the camper at the campsite and head downtown to find a nice restaurant or bar.

Day 6: The Tröllaskagi Peninsula and the North

With time quickly running out, it’s time to say farewell to Akureyri and head delve into the mystical Tröllaskagi Peninsula. This beautiful stretch of road loops around the mountainous peninsula, providing breathtaking vistas of the wild coastline and taking you through the forgotten fishing villages of the north.

Stop off at Hofsós to take a dip in their gorgeous swimming pool, commanding a prime position by the coast line and offering amazing views over the fjord. Continue down through the north towards Hvammstangi, a surprisingly beautiful town that’s a stone’s throw away from Iceland’s largest seal colony and camping destination for the evening.

The last day with the campervan will be spent slowly making your way back into Reykjavik as your trip winds down. If you haven’t had your fill of waterfalls just yet, head a little bit inland to visit Hraunfossar, a beautiful and unique waterfall that often goes overlooked. Afterwards, instead of taking the tunnel underneath Hvalfjörður opt to head down towards the bottom of the fjord where you can find the trailhead to Glymur, one of Iceland’s tallest waterfalls. The hike, which takes about 3 hours return, will lead you up one side of a gorge, with the impressive Glymur hiding at the top.

As the afternoon comes, it’s time to drive back into Reykjavik. The capital city is a vibrant and quirky place, with lots to see and do. The Reykjavik Campsite is a great place to spend your last night, an easy walk into downtown and right next to the largest swimming pool in the city, Laugardalslaug. Visiting the Hallgrímskirkja church and the Harpa Music and Conference Hall on the water are recommended, and of course getting yourself a proper meal after so long spent on the road.

Those in Iceland for a longer time will love this 10-day ring road itinerary, designed especially for campervans and taking in the best sights around the country.